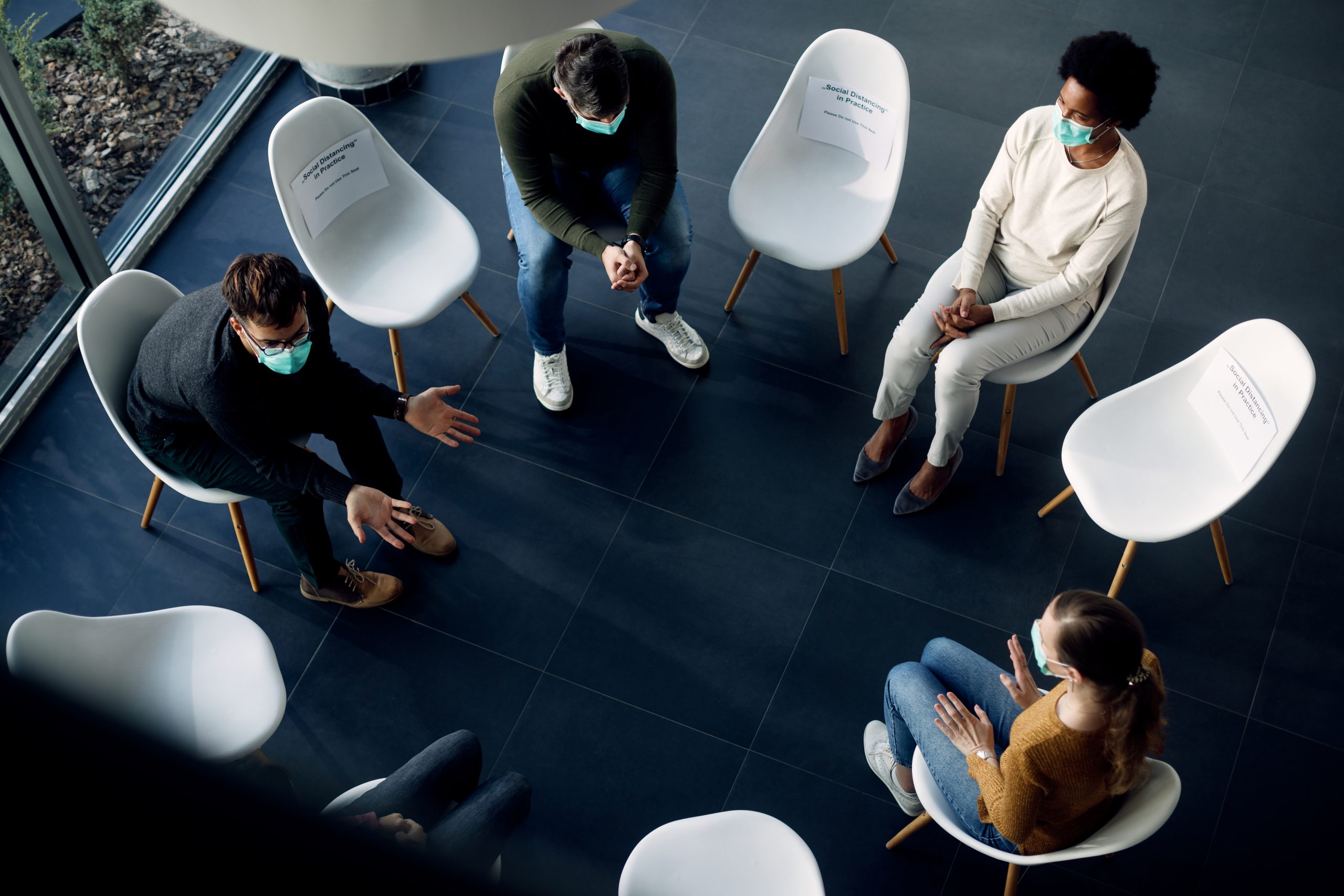 Wondering what a world without prisons could look like? Deanna Van Buren is the Co-Founder and Executive Director of the Oakland based nonprofit Designing Justice and Designing Spaces, an organization that is working to end mass incarceration by building infrastructure that addresses its root causes – poverty, racism, unequal access to resources, and the criminal justice system itself.

Recently, Deanna Van Buren spoke with radio host Ethan Elkind on KALW’s STATE OF THE BAY show about her introduction to restorative justice work and how integrating architecture and design at the beginning of these processes can transform the outcomes.

Read on for an edited transcript of their fascinating conversation, courtesy of KALW, or listen to the interview here (beginning at 47:00).

ETHAN ELKIND, KALW: You call yourself a prison abolitionist. Can you explain what that is and how it is you came about doing the work that you do?

DEANNA VAN BUREN, DSDJ: From our perspective, prison abolition means we see a future where we don’t have prisons anymore, where folks are not incarcerated for harm done, where there are alternatives to incarceration that make penal infrastructure obsolete.

How did I come to be doing this work? It’s a long story but here is a short version. I was an architect for a long time, practicing in corporate America and globally, and I heard about a practice called Restorative Justice back in 2007 in Oakland. I was at the Taylor Memorial Methodist Church in East Oakland on Martin Luther King, Jr.’s birthday – I remember the exact moment in time – when Angela Davis and Fania Davis, such great activists, got up on stage and started talking about Restorative Justice, a form of justice that is about repair instead of punishment. In that moment, I made a decision that that was a system that I could support and get behind, and that began the journey of how we can design for restorative justice rather than punishment.

ETHAN: How do you design for restorative justice? What are some of the elements you incorporate?

DEANNA: We design a lot of things, but the restorative justice space is our thought leadership that we’ve been able to develop over time. When we design for restorative justice, we engage the community, we talk to the people who are going to use the space. We ask them,  “What kind of environment would you need to face the worst harm that has ever happened to you? What kind of environment would you need to heal from that harm or that harm you might have caused?”

These spaces need to have a kitchen – there needs to be food. Nobody goes to the courthouse to get food. Right? But we’re finding that in our peacemaking spaces, people do come just for the food, to be in a place to to break bread. Our restorative justice spaces have a beautiful entry space that feels like a living room. They’re peacemaking spaces that feel protected and private but have views out to nature, cool-off spaces. I could go on. We’ve developed a whole set of design guidelines for what these spaces look like and need to be.

It’s really important that we begin to work in a radically multi-disciplinary fashion, working with artists and architects and designers to access their creative tools and ways of thinking, and work with communities to really imagine these new things. We have to invest in the research and development of these new typologies and prototypes. This process requires democratizing what we do to enable deep community involvement, agency and understanding, even going so far as supporting alternatives to ownership typologies. It’s not just the architecture, but how it gets funded and financed has to be rethought. That’s something we’re really committed to in our process.

ETHAN: It sounds like the process in some ways is mirroring restorative justice with listening and outreach key components. Can you give us some examples of projects that you’ve been involved in with this model and any outcomes you’ve seen to date?

DEANNA: I can give two specific examples. There’s Restore Oakland, the country’s Center for Restorative Justice and Restorative Economics in Fruitvale. They have a dedicated space for restorative justice co-located with food, at a restaurant that trains low-wage restaurant workers to get living wage jobs in fine dining, and community organizing space. So the restorative justice component is a major part of a constellation of uses.

In Syracuse, New York, we did the Syracuse Peacemaking Center, and that project is the best one to look at outcomes because it’s been operating for five years. What happens there is that the elders in the community are moderating quality-of-life crimes. Folks get diverted out of court, they come here. It’s a version of Native American peacemaking practices in a non-Native community for the very first time in the country.

What we found there has been amazing. This house, this old drug house that we converted into a peacemaking space, has now become the heart of the community. Folks are coming by not just for peacemaking but they’re starting to have their quinceaneras there and they’re starting to have their engagement parties there, and they can’t stop the kids from coming by now. They’ve got to expand the program, and now they need more space for peacemaking.

If you think about how to develop both program and place at the same time, and you’re very thoughtful about where it goes and how it looks and feels, and engage the community, you can create a place that has incredible power and transformative power. That’s what a place can do if you do it right.

ETHAN: It sounds like in a lot of ways these are meeting multiple needs, not just in terms of peacemaking but as community centers. Deanna, let me ask you about upcoming projects. Are there any in the pipeline that you’re particularly excited about or that we can look forward to?

DEANNA: We’ve got two. One is in Detroit. We’re working on a creative oasis for social justice called the Love Campus. This will be our first real estate development project where we own it rather than just helping others own it. We will be investigating alternative justice programming there, we’ll have a restorative justice space, there will be an arts and culture anchor in there, youth spaces, etc. We’ll be able to test out and pilot a lot of new programmatic models in the space, which is very exciting for us. Phase one, the Love Building, has already started construction.

The second thing that I think is also very exciting is we are supporting the Alternatives to Incarceration implementation that is happening in LA County, and looking to do another pilot there. I think this is the most cutting edge work in the United States happening right now, really focused on ending mass incarceration along with a focus on youth because California is also committed to ending youth incarceration. We’re excited to hopefully be piloting that first prototype in Long Beach. We think we might call it a “Restorative Care Village”, although we don’t know yet as it is an emergent project.

There is a whole lot of new work to be done and spaces to make, and we’re so happy to be partnering with community organizers and the county to really advance that vision.

ETHAN: Finally, I have to ask about the prospects for criminal justice reform at the federal level. President Biden has made this one of his priorities. Do you see reform happening? And if so, how would you like to see it happen at the federal level to bolster the work that people like you are doing on restorative justice?

DEANNA: Our hope was always to start to see a commitment of tax dollars. Your tax dollars pay for prisons and jails and all that stuff. We pay for that. We need to see a shift in our tax dollars going to build this equitable infrastructure, restorative justice infrastructure. I know that there is a commitment – although it’s not big enough – to begin to end youth incarceration. Being able to incentivize states is where the work really needs to be done, because most incarceration happens at the state level. But if the federal government can incentivize states, monetarily, etc., to close these facilities and really investigate alternatives, that is where we’re looking to pilot with groups who might be ignited by such a move. I know there is some funding looking to come from the federal government to do so.

ETHAN: Thank you so much for joining us on State of the Bay and for all your work on restorative justice.

DEANNA: Thank you, Ethan, I appreciate that. Thanks for having me.