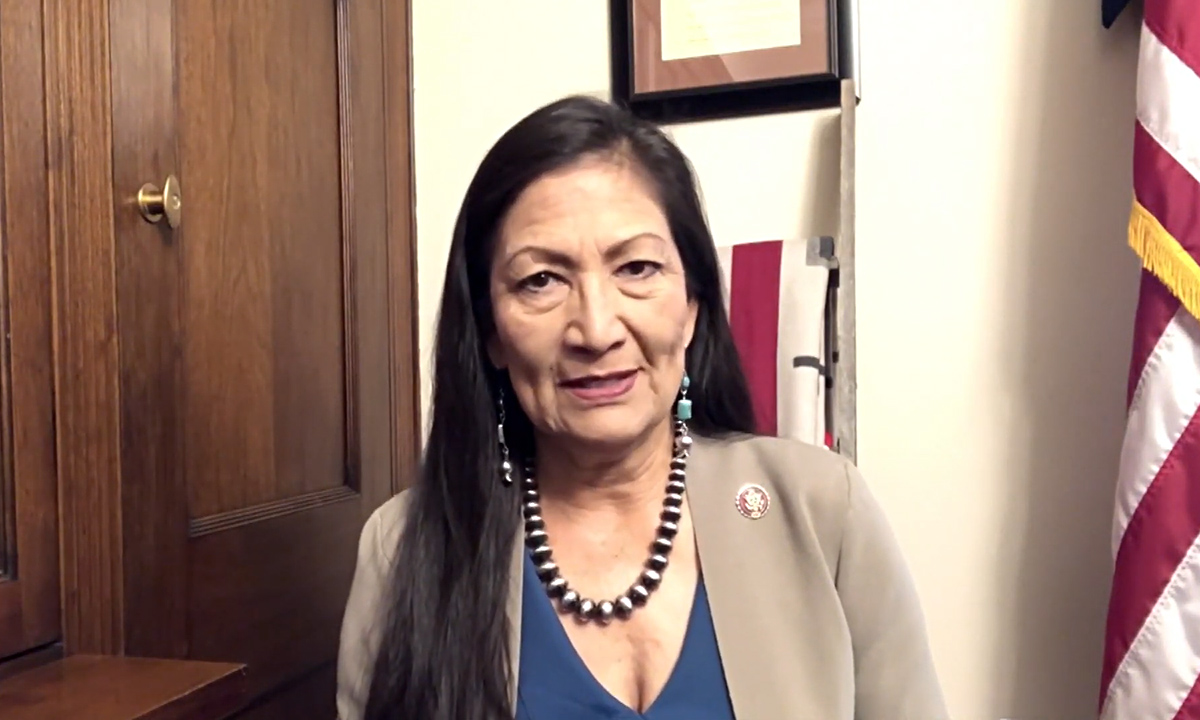 Bioneers is thrilled to see Congresswoman Deb Haaland (Laguna) appointed as the first Native American Secretary of the Interior. We met with Deb Halaand in 2019 to share our Rights of Nature in Indian Country initiative that she pledged support and interest. As the Secretary of the Interior, Congresswoman Halaand’s responsibilities will involve the conservation and management of 500 million acres of federal lands, most of which are adjacent to tribal reservations, some of which we are collaborating in our Rights of Nature initiative. This potential support from the Secretary of the Interior, who deeply understands issues in Indian Country, is an absolute game-changer for protecting wild spaces for all Americans.

Deb Haaland is a member of the Pueblo of Laguna in New Mexico. In 2019, her appointment as the U.S. Representative from New Mexico’s 1st congressional district was celebrated across Indian Country. We cheered collectively for her and Rep. Sharice Davids (Ho Chunk) from Kansas, as they had finally shattered the glass ceiling for Native people — especially Native women — to see themselves represented for the first time in the history of the U.S. government. To see a Native woman dressed in traditional regalia while taking the oath of office was a moment that took our breath away.

It’s a lesser known and shameful fact that, in 1924, Native Americans were the last minority group to be granted U.S. citizenship as a group. Let that sink in. It was less than 100 years ago that our nation’s First Peoples were the last of the minorities to become legally recognized as citizens of this land.

Her confirmation as a Cabinet Secretary on the heels of her appointment to US Congress is no less than extraordinary for our community. She is the first-ever congressperson openly committed to working on the epidemic of missing and murdered indigenous women. Haaland would like Congress to hold additional oversight hearings on the issue and ensure tribal justice systems have the resources they need to conduct proper investigations. Also at the top of her list is combating climate change, including the big oil and energy industries, which continues to threaten fragile tribal lands and ecosystems. As Interior Secretary, she will oversee the conservation and management of 500 million acres of federal lands, most of which are adjacent to tribal reservations, including tribes we are collaborating with in our Rights of Nature initiative. The Department of the Interior includes supervision of the National Park Service, the Fish and Wildlife Service, the Bureau of Land Management and the Bureau of Indian Affairs, among other responsibilities. Given the initial goals of resource extraction and exploitation that created many of these agencies there are certainly deep structural and bureaucratic hurdles that Secretary Haaland will face, but the reality of having a progressive, caring and earth-supporting Indigenous woman running the show is certainly a reason for hope.

During a moment in time where so much is happening so quickly, it is important to recognize and celebrate major achievements. There are enormous hills still to climb as we work to heal and restore landscapes — and the confirmation of the first ever Indigenous Secretary of the Interior is a significant step in the right direction. Bioneers extends our deepest congratulations to Secretary Haaland and look forward to her leadership and support as we work alongside so many other incredible Native organizations and movement activists towards repairing and renewing our collective relationship with the earth.