Some Dogs Can Sniff Out Cancer 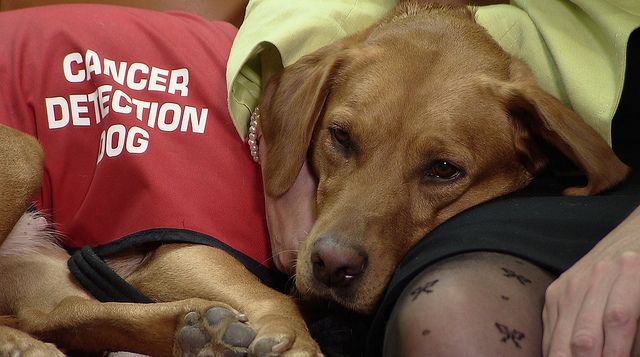 Science is now showing that a dog’s nose is the most sensitive tool known for detecting cancer. Like, 99% accurate. Woof!

My old friend and colleague Ralph Moss just published a fascinating short piece that surveys this remarkable research. Read it and howl. 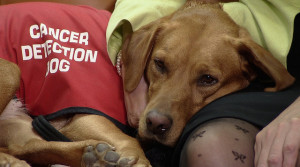 Truthfully it’s not all that surprising. In the 1980s I produced a movie called Hoxsey: How Healing Becomes A Crime that had a parallel story. In the early 1900s, Harry Hoxsey inherited his family’s herbal cancer treatment from his grandfather, an Illinois horse farmer. Old farmer Hoxsey had devised the formula after reputedly observing a horse with a malignant tumor cure itself by eating unusual plants not part of its normal diet. Call it horse sense. About 150 years later, all the herbs would be shown to have anti-cancer, anti-tumor and immune-boosting properties.

When I invited a Native American friend to the editing room and he saw this part of the story, he audibly grunted. He turned to me, slyly grinned and said, “People think the Indians went around and tasted every plant to gain their knowledge. That would be very dangerous. We watched the animals.”

Today there’s an entire branch of science called “zoopharmacognosy” that Jane Goodall helped develop. Animals have been successfully self-medicating for a very long time. One reason their senses are so highly developed is evolutionary. Predators such as dogs (or their ancestor the wolf) expend less energy pursuing the sick, the weak, the old and the young.

Thus do scientists doggedly pursue the mysteries of healing. We’ve been barking up the wrong tree.

Here’s an excerpt of Ralph’s blog post on this:

In 2006, acupuncturists at the Pine Street Clinic, St. Anselmo, CA, published a pioneering study titled “Diagnostic Accuracy of Canine Scent Detection in Early- and Late-stage Lung and Breast Cancers.” In it, they demonstrated that a dog’s nose is the most sensitive tool known for the detection of cancer cells. …

“Recent research suggests that dogs can detect scent in the measure of one part per trillion,” Nicholas Broffman, son of the clinic’s co-director, Michael Broffman, LAc, told me.

Pine Street then asked Prof. Tadeusz Jezierski, of the Institute of Genetics and Animal Breeding of the Polish Academy of Sciences, to conduct further research on dogs’ scent detection. “We wondered if there was a biomarker, some kind of signature to cancer cells,” said Nicholas. “We set out to look for a device to test for such a thing, and it turns out that it is the dog. There is no technology that even comes close.”