Dolcini: “Efforts to help one species generally promote all species” 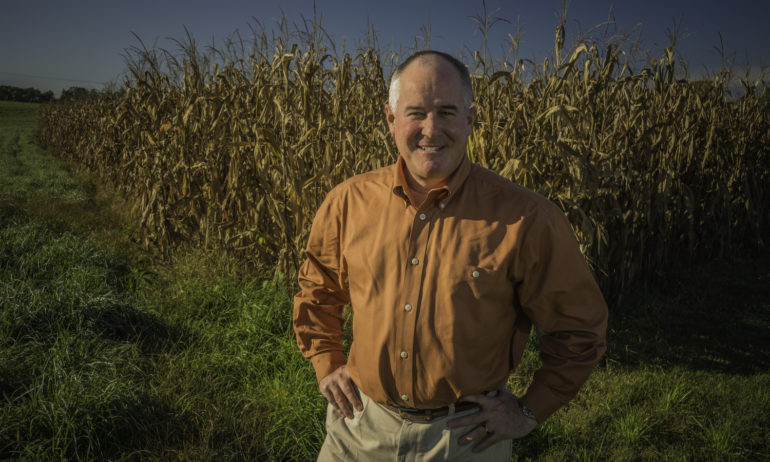 Val Dolcini is the President and CEO of the Pollinator Partnership (P2), an organization dedicated to promoting the health of pollinators, including bees, through conservation, education, and research. When he was appointed to this position earlier this year, Dolcini stated, “it is critically important to redouble our efforts to develop new and deeper public partnerships for the benefit of pollinators and to more fully engage our fellow citizens in order to encourage greater protection to all pollinators.”

Bees, including honey bees and native bees, pollinate 71 of the 100 crops that provide 90 percent of the world’s food. Beekeepers report an average loss of 30 percent of honey bee colonies each Winter since 2012. A study by the Center for Biological Diversity that assessed the status of 4,337 native bees found that more than half were in decline and nearly one in four are imperiled and at an increasing risk of extinction.

Dolcini is passionate about helping pollinators and American farmers. Before joining P2, he held numerous positions in government, businesses, and nonprofits including the United States Department of Agriculture (USDA) Farm Service Agency. As the Administrator of the agency, he managed over 2,000 offices and 10,000 employees. In 2013, Dolcini contributed an article to Food Tank on microloans for small farmers in the United States.

Food Tank had the opportunity to talk with Dolcini about the importance of pollinators, the problems they face, and opportunities to help protect them.

Food Tank (FT): There has been a lot of public attention focused on honey bees. What roles do native pollinators, like bumblebees and butterflies, play in agriculture?

Val Dolcini (VD): That’s a great question. Honey bees are a real gateway species when it comes to understanding pollinators. I think they are the pollinator that most people are familiar with because they see it floating around their backyards and they know generally that honeybees play an important role in bringing us fully one-third of our diet in the Western world.

But there are certainly more species than just the honey bee. There are 20,000 species of bees around the world, including 4,000 in the United States alone. There are multiple managed species of native bees that are used in specific agricultural settings. There are bees like the blue orchard bee that are maintained for apples, pears, cherries, and other stone fruits. There’s the alfalfa leafcutter bee that obviously plays an important role in the pollination of alfalfa, which goes into the production of beef cattle and dairy cattle. There are alkali bees that are used in some crop operations in areas where there are really salty soils. And then there are of course bumble bees, which are used extensively for greenhouse tomatoes, peppers, and sometimes even field tomatoes.

FT: What are the greatest threats to pollinators?

VD: I boil it down to the four P’s when it comes to pressures on pollinators. One would certainly be pesticide misuse. There’s a lot of prophylactic use of pesticides in the United States and elsewhere and those pressures can really harm pollinators. There are also parasites and pathogens. The varroa mite certainly impacts honey bees in a negative way and there are diseases that are transferred from honey bees to wild bees. There’s the pressures of climate change and the mismatch of flower blooms and the emergence of native bees. But I think the biggest threat is the loss of pasture or habitat. We’ve created a lot of monocultures in the United States, in the Midwest in particular, and what was formerly a diverse habitat hosting multiple species is now farmed to just one or two crops. That loss of habitat has been an impactful issue for pollinators of all types.

FT: While Administrator of the United States Department of Agriculture (USDA) Farm Service Agency, what was the level of interest in protecting pollinators and what steps were being taken to that effect?

VD: We did a lot of work while I was at the Farm Service Agency to expand existing programs like the conservation reserve programs (CRP), which covers about 25 million acres of farm and ranch land around the country. We incorporated pollinator-friendly practices into this program, including the planting of pollinator buffer strips. We supported the use of certain native seed mixes that included a lot of pollinator-friendly plants within them.

We tried, for the first time I think, to focus on what the USDA could do to increase support for pollinators through the use of our programs. And there were certainly other agencies like the Forest Service, Natural Resources Conservation Service, and a whole host of different USDA agencies who were involved in that effort. However, since we were the agency that had the primary connection to farmers and ranchers, we really did a lot to make sure that they were well-educated and well-informed when it came to using our conservation programs. Given the importance of pollinators to American agriculture, they were very interested in being a part of that and I was glad to see that those pollinator programs were as successful and as popular as they were.

FT: What changes are and will occur after the recent listing of the Rusty Patched Bumble Bee as endangered and how will this affect other pollinators?

VD: I think the efforts to help one species generally promote all species. Given that bumble bees are generalist foragers, I think they’ll benefit from the broadest set of habitat support, which will, in turn, support other bees. However, it remains to be seen what will change. This was the first bee that was listed as endangered, so we are wondering about that, too.

FT: A class of widely used insecticides known as neonicotinoids is toxic to bees. What is needed to stop their use?

VD: That’s a tough question to boil down to one easy answer. I will start by saying Pollinator Partnership believes that the unwarranted use of all chemical pesticides, and that includes neonics, pyrethroids, carbonates, and organophosphates, should be eliminated. Too many homeowners and farmers rely on pesticides as an insurance policy and end up going overboard in terms of their use.

A better way to deal with the issues of pests on a farm or in your backyard is to turn towards integrated pest management, which encourages a broader variety of practices that approach the issues in a systematic way. It gives farmers, as well as homeowners, more tools at their disposal. It can be something as simple as, in the case of a backyard pollinator garden, planting native plants that encourage beneficial insects to come into your backyard.

I think it’s also important to note that if one class of insecticide were to be banned, farmers and homeowners would likely just go to another, perhaps less tested class of insecticide. It’s a bit of a slippery slope, so I think it’s important to only use pesticides or any other kind of treatment when there is a proven economic impact as opposed to simply using it in a prophylactic form. The unwarranted use of these pesticides has a very negative effect on pollinators and a whole host of other species.

FT: As the President and CEO of the Pollinator Partnership, what direction do you plan on taking the organization in? What should organizations like it be focusing on in the pollinator debate?

VD: We’ve just completed our annual week of meetings here in Washington, the North American Pollinator Protection Campaign. Of the many things that we do, acting as a convener of meetings like that to talk about relevant and topical pollinator issues is an essential part.

I want to build on the successes of what the Pollinator Partnership has done over the past couple of decades, but I also want to start having conversations with production agriculture because I think they’re an essential part of the solution. I want to bring people into the conversation about pollinators through a conversation on local and regional food issues, like what you do with Food Tank. I think that’s a way to bring consumers of food and people interested in supporting local farmers and local and regional food into the whole universe of issues that are related to that, including pollinator health. When people more fully appreciate the impact of pollinators on our diet, I think it will be a natural way for them to get involved in programs and issues that promote and protect pollinator health.

Climate change is another big issue for us. I think it’s the conservation issue of our time. The impact that a changing climate has on the world’s pollinators is something that’s poorly understood. It’s not an area that science has really settled on a definitive answer for, so we need to do more research, but we do know from preliminary findings that it’s had a significant impact on a whole range of species including pollinators.

There are lots of different things going on that I want to remain involved with in regards to my stewardship of the Pollinator Partnership. Those are just a few of them.

FT: What can individuals do to help pollinators?

VD: There are lots of things that are easy for folks to do. The first would be to plant a pollinator garden in their backyard. This is something that Mrs. Obama challenged the world to do a couple years ago. She said let’s put a million pollinator gardens in the United States. I think we’re at about 650,000 right now, so that’s a relatively easy thing for folks to do.

They can reduce or eliminate the use of pesticides in their environments. They can reach out to others to help inform and inspire folks about the story of pollinators. We sponsor National Pollinator Week every year in mid-June and that’s a great way for people to be involved in their own communities. They can support local farmers and local beekeepers by buying locally produced food, which is impacted by pollinators, and locally produced honey. And they can more broadly conserve their own resources and be a little less impactful on their local environment, all of which will go a long way towards supporting the health of pollinators, whether it’s the backyard or the back 40. They can certainly support the work of groups that are promoting good science-based practical solutions, like the Pollinator Partnership.

Lastly, the Pollinator Partnership is spearheading an effort to provide disaster relief for the beekeepers of Puerto Rico on the US Virgin Islands. There are 130 to 150 beekeepers, depending on how you are counting them, and they play a critical role in the pollination of all kinds of specialty crops. Hurricane Maria knocked out most of those pollinators and so we’re soliciting donations to purchase bee food and new hive boxes. I suspect it will be a process we’re involved with for the foreseeable future.