Entrepreneurs Who Design Generously: Celebrating Nature-Inspired Innovation With the Ray of Hope Prize 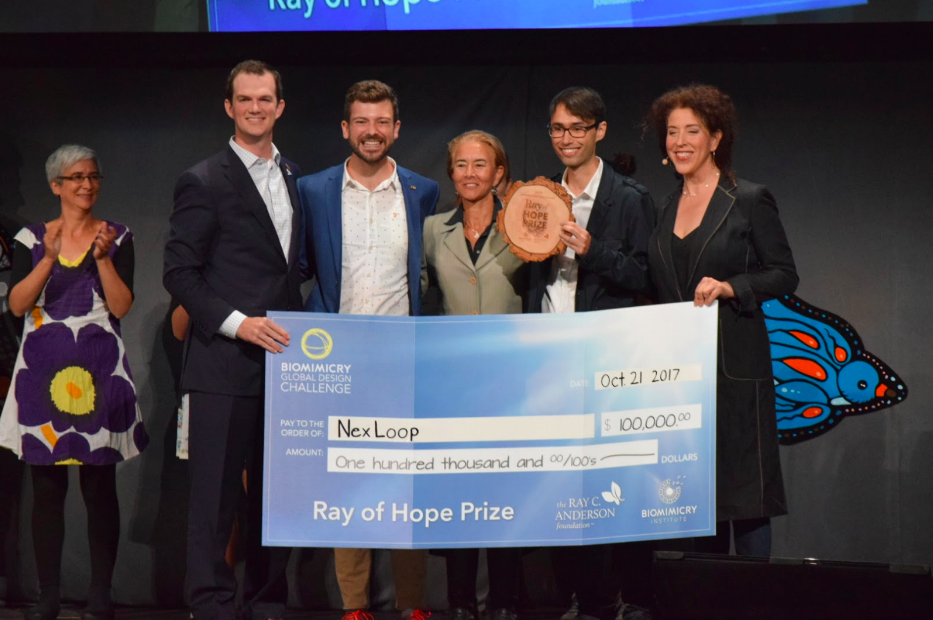 These aren’t your everyday entrepreneurs. They understand that truly groundbreaking climate change solutions won’t come from the same take, make, and waste mindsets that have gotten us into our current environmental messes. Instead, they seek to emulate the natural world to create solutions that are regenerative, circular, and generous to all species on this planet.

The Biomimicry Launchpad supports this new kind of entrepreneur. Created by the Biomimicry Institute and sponsored by the Ray C. Anderson Foundation, it’s the world’s only accelerator program that focuses on helping early-stage entrepreneurs bring biomimetic, or nature-inspired, innovations to market. Each year, Launchpad teams are eligible to compete for the Ray C. Anderson Foundation’s $100,000 Ray of Hope Prize®. Teams are invited to join the Launchpad either by applying directly, or by participating in the Biomimicry Global Design Challenge, a global competition for university students and professionals to create nature-inspired climate change solutions.

Bioneers celebrates these bold thinkers by presenting the Ray of Hope Prize each year on the mainstage. Sure, it’s a competition, but year after year, these teams form deep bonds, and many go on to collaborate on whole-systems solutions. It’s a great example of how Bioneers fosters connection, collaboration, and community.

Launchpad teams have gone on to win awards and additional funding, appear at conferences all over the world, and participate in other accelerator and incubator programs. Read on to learn more about these teams and what they’ve accomplished in their post-Bioneers journeys:

Two Biomimicry Launchpad alumni teams are part of a consortium that has won a €10 million grant from the European Union to that aims to demonstrate and test innovations that close water loops, feed the soil, and promote local economies.

As part of the HYDROUSA grant, the Mangrove Still design, a desalinating still inspired by mangrove ecosystems, and the BIOCultivator, a growing/composting system inspired by lizards, will be included in a pilot project on Greek islands. This wide-scale grant project will incorporate different nature-inspired solutions to create a regenerative system that will produce fresh water for agricultural and household use, plus create jobs in the region. The Mangrove Still system will be used to produce freshwater for a greenhouse, and the BIOCultivator design will be adapted into a compost cultivator that will be used to fertilize and irrigate soil.

Alchemia Nova CEO Johannes Kisser is leading up the development of the biomimicry applications in the grant, along with Regina Rowland and the team at Bioversum, a new NGO that develops projects that apply the principles of biomimicry and circular economy and design.

Teaming up to collaborate on food system solutions

The 2016 Ray of Hope Prize-winning team, LifePatch (formerly BioNurse) is collaborating with the Mangrove Still team (described above) to develop a joint project that utilizes both of their designs to address both water and soil issues resulting from climate change. By combining the Mangrove Still’s affordable and efficient desalination design with LifePatch’s biodegradable, low-cost way to restore degraded soil, they aim to create a whole-systems approach to helping agricultural communities suffering from water scarcity and desiccated soil. The Mangrove Still team was previously awarded a grant from Dubai Expo 2020 and used those funds to test their system in Egypt, India, Namibia, Cape Verde, and Cyprus. Both of these teams are jointly applying for funds to test their combined technologies.

Team NexLoop won the 2017 Ray of Hope Prize for their water management system for urban food producers, inspired by the way living systems capture, store, and distribute water. Since their win, they have spoken at conferences around the world, including the National Science Festival in Croatia, and are focusing on developing a field-ready prototype. They have identified four international pilot sites and have been actively applying for additional funding to carry out these pilots.

Team Hexagro created a modular growing system that enables people to grow fresh food in indoor settings. Since their Launchpad experience, they’ve displayed their designs at conferences all over the world, including at a technology display in Lyon, Milan Design Week, Seeds and Chips in Milan, Tech Open Air in Berlin, and at universities in Costa Rica and Slovenia. They’ve also participated in multiple startup pitch events, bootcamps and incubators, including the Katana Bootcamp in Stuttgart, Germany, where they were selected as the #1 pitch out of 100 teams participating in the bootcamp, the Kickstart Accelerator program in Switzerland, and the Lee Kuan Yew Global Business Plan competition in Singapore. Most recently, the Hexagro team was accepted to Singularity University’s SU Ventures accelerator program.

Don’t miss out! Six new international Biomimicry Launchpad teams will be coming to Bioneers this year to showcase their nature-inspired climate change solutions. You can find out who the next 2018 Ray of Hope Prize winner is and meet all of the 2017-18 teams on Saturday, October 20th. Learn more about the Biomimicry Global Design Challenge here and the Biomimicry Launchpad here.