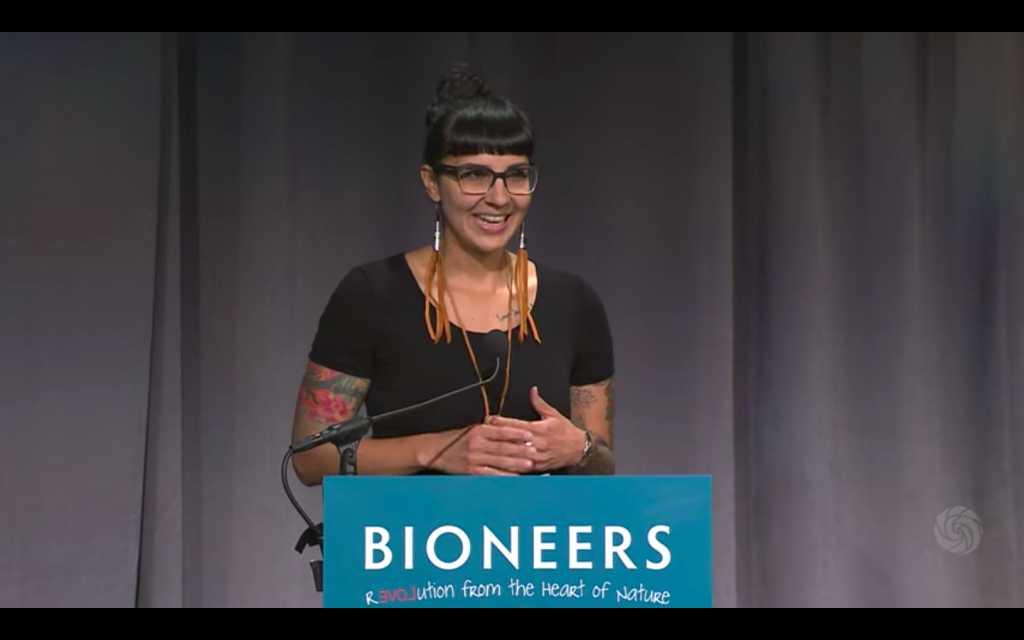 There’s a prophecy that says that at this time in Earth’s history, the eagle and the condor will rejoin, remembering they are one. They will reconnect and remember their common origin and share knowledge and wisdom and save each other. The eagle and the condor will fly together and the world will come into balance at a point of near extinction. We are at that point now.

This important moment in time is at the heart of Eriel Deranger’s inspirational 2015 Bioneers presentation. Not only is humanity at an environmental tipping point, she says, but Indigenous People—who have historically cared for and revered Mother Earth—are leading the way toward a cleaner, healthier ecological future.

Deranger has been an important voice within the environmental justice movement for the better part of a decade. She is currently the director of Indigenous Climate Action, an Indigenous-led organization formed in 2015 to inspire action for climate justice while supporting Indigenous communities to build power and drive climate solutions.

Watch Deranger’s 2015 presentation and read excerpts from the transcript below. See more from our Indigeneity Program here.

We still struggle for the recognition of our humanity and our rights as Indigenous People. It’s time that we abandon the patriarchal and colonial ideologies rooted in things like the Doctrine of Discovery and terra nullius. We have always been here, and we were never discovered.

Today, we are facing a global crisis—climate change. Indigenous People are not only threatened by colonial policies to eradicate our rights, our cultures and identities that are intrinsically linked to our places of origin. We are now threatened by manmade climate change. Coastlines are rising, weather patterns are changing, and we’re experiencing floods, droughts, out-of-control forest fires, and species disappearing. It’s Indigenous Peoples and land-based peoples that feel it first and most adversely.

So, who am I? I’m an Indigenous person. And like many Indigenous People who work and walk within the environmental movement, I’ve never actually considered myself an environmentalist. First and foremost, I’m a proud member of the Athabasca Chipewyan First Nation, the “people of the willow,” a reference to the Delta where my people have lived since time immemorial.

My people’s rights and culture are in the crosshairs of the largest project on Earth, the tar sands. The legacy of this project is one of contamination and out-of-control pollution that puts us all at risk. It consists of toxic lakes that cover 240 square kilometers, seeping contaminants into the river systems that my people rely on. It creates as much greenhouse gas emissions as all of the vehicles in Canada combined. And if left unchecked, it could double, if not triple. It’s out of control.

And yet with all these facts and stats, I’m still just that little Indigenous girl. I’m an Indigenous woman working to ensure that my children and the generations to come have an ability to understand our culture, our identity, and our connections to our places of being.

I have found allies and kinship within the environmental movement, and I’ve begun to find hope. I’ve begun to believe that we can stop this destruction and start the process of healing and reconciliation, and decolonization, and challenging the status quo of the blind acceptance and the marginalization of Indigenous Peoples.

These founders have allowed me to stand here today, and they have created this merging of movements. But it hasn’t come without its challenges. It’s easy to forget that Indigenous communities have faced centuries of systemic oppression that has robbed us our ability to easily enter local, national and international forums where policies and decisions are being made that ultimately affect our rights and our cultural survival. As we attempt to merge these movements it’s imperative that we work together to find ways to address the roots of oppression and not get lost in surface issues like simply protecting a piece of land, as was commonly done by early inceptions of the environmental movement. It’s become imperative that we work together to address colonialism, racism, sexism, and the continued marginalization of those who have been deemed less worthy.

A new way forward is emerging and Indigenous Peoples are leading the way, from the Beaver Lake in Northern Alberta, who have set a legal precedent by launching litigation highlighting the tens of thousands of treaty violations created from tar sands extraction; to the Unist’ot’en, who have set up blockades stopping the construction of gas, oil and tar sands pipelines through their territory in Northern British Columbia; to the Elsipogtog First Nation in New Brunswick, fighting the fracking of shale oil on their sacred lands, sparking an anti-fracking movement in Canada; to communities here in the United States like the Hidatsa, Arikara, and Mandan in North Dakota, challenging the development of the Bakken oil fields. And in the north, the Indigenous Inupiat communities have stood up en masse, challenging off-shore drilling in the Arctic, and it’s resulted in Shell pulling their application to drill.

Our people are becoming the face of the environmental movement, and this hasn’t happened by accident. It’s been our people having the legal and moral authority to stand up and challenge these systems of oppression that has brought us to where we are today. In addition, we have a deep spiritual connection to this place we call Mother Earth. Indigenous People of the global north and the global south have been utilizing a platform created by our ancestors—the foundations of our culture—to safeguard our river systems, our food systems, our culture, our identity and our land base.

There’s a prophecy that says that at this time in Earth’s history, the eagle and the condor will rejoin, remembering they are one. They will reconnect and remember their common origin and share knowledge and wisdom and save each other. The eagle and the condor will fly together and the world will come into balance at a point of near extinction. We are at that point now.

If we do not work together, we will not survive. A new consciousness is emerging. Indigenous People globally are demanding recognition of who we are, and there’s an undeniable resurgence of indigeneity and Indigenous People reclaiming their places and spaces in society. This couldn’t be more true than what we are witnessing in the environmental movement. We have a future worth fighting for.

Strictly Necessary Cookie should be enabled at all times so that we can save your preferences for cookie settings.

If you disable this cookie, we will not be able to save your preferences. This means that every time you visit this website you will need to enable or disable cookies again.

This website uses Google Analytics to collect anonymous information such as the number of visitors to the site, and the most popular pages.