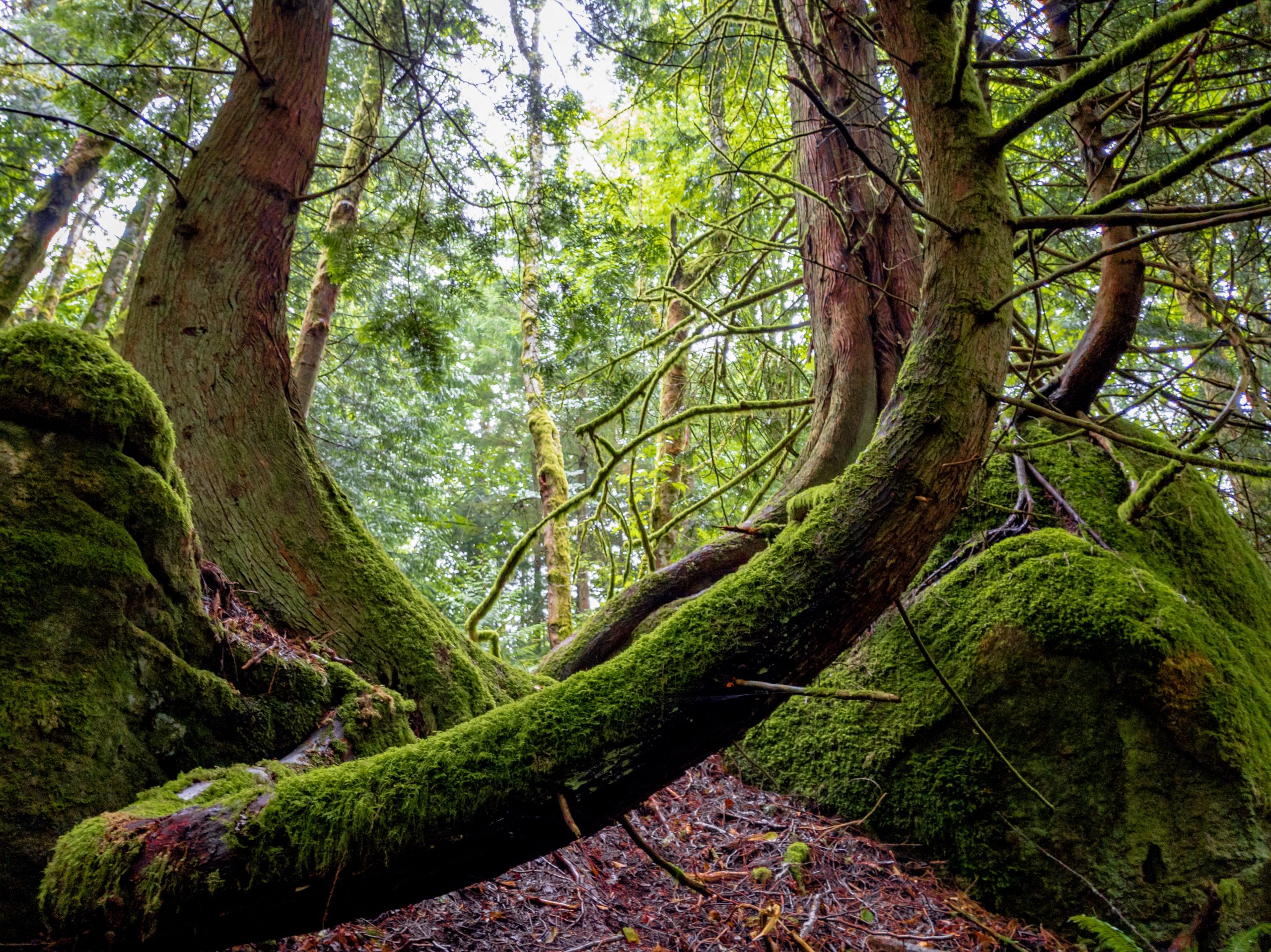 Suzanne Simard is a professor in the Department of Forest and Conservation Sciences at the University of British Columbia, and an innovative scientist at the forefront of plant communication and intelligence. Simard’s research highlights the ways trees communicate with each other to warn about danger and share nutrients in critical times.

In nature, trees are linked to one another by a single tree that acts as a central hub. Suzanne refers to this tree as “The Mother Tree.” In her new book, Finding the Mother Tree: Discovering the Wisdom of the Forest, Suzanne Simard explores the communal nature of trees and their shared network of interdependency. Described as a “scientific memoir,” the following is an excerpt from the introduction to her book titled “Connections.”

For generations, my family has made its living cutting down forests. Our survival has depended on this humble trade.

It is my legacy.

I have cut down my fair share of trees as well.

But nothing lives on our planet without death and decay. From this springs new life, and from this birth will come new death. This spiral of living taught me to become a sower of seeds too, a planter of seedlings, a keeper of saplings, a part of the cycle. The forest itself is part of much larger cycles, the building of soil and migration of species and circulation of oceans. The source of clean air and pure water and good food. There is a necessary wisdom in the give-and-take of nature—its quiet agreements and search for balance.

There is an extraordinary generosity.

Working to solve the mysteries of what made the forests tick, and how they are linked to the earth and fire and water, made me a scientist. I watched the forest, and I listened. I followed where my curiosity led me, I listened to the stories of my family and people, and I learned from the scholars. Step-by-step—puzzle by puzzle—I poured everything I had into becoming a sleuth of what it takes to heal the natural world.

I was lucky to become one of the first in the new generation of women in the logging industry, but what I found was not what I had grown up to understand. Instead I discovered vast landscapes cleared of trees, soils stripped of nature’s complexity, a persistent harshness of elements, communities devoid of old trees, leaving the young ones vulnerable, and an industrial order that felt hugely, terribly misguided. The industry had declared war on those parts of the ecosystem— the leafy plants and broadleaf trees, the nibblers and gleaners and infesters—that were seen as competitors and parasites on cash crops but that I was discovering were necessary for healing the earth. The whole forest—central to my being and sense of the universe—was suffering from this disruption, and because of that, all else suffered too.

I set out on scientific expeditions to figure out where we had gone so very wrong and to unlock the mysteries of why the land mended itself when left to its own devices—as I’d seen happen when my ancestors logged with a lighter touch. Along the way, it became uncanny, almost eerie, the way my work unfolded in lockstep with my personal life, entwined as intimately as the parts of the ecosystem I was studying.

The trees soon revealed startling secrets. I discovered that they are in a web of interdependence, linked by a system of underground channels, where they perceive and connect and relate with an ancient intricacy and wisdom that can no longer be denied. I conducted hundreds of experiments, with one discovery leading to the next, and through this quest I uncovered the lessons of tree-to-tree communication, of the relationships that create a forest society. The evidence was at first highly controversial, but the science is now known to be rigorous, peer-reviewed, and widely published. It is no fairy tale, no flight of fancy, no magical unicorn, and no fiction in a Hollywood movie.

These discoveries are challenging many of the management practices that threaten the survival of our forests, especially as nature struggles to adapt to a warming world.

My queries started from a place of solemn concern for the future of our forests but grew into an intense curiosity, one clue leading to another, about how the forest was more than just a collection of trees.

In this search for the truth, the trees have shown me their perceptiveness and responsiveness, connections and conversations. What started as a legacy, and then a place of childhood home, solace, and adventure in western Canada, has grown into a fuller understanding of the intelligence of the forest and, further, an exploration of how we can regain our respect for this wisdom and heal our relationship with nature.

One of the first clues came while I was tapping into the messages that the trees were relaying back and forth through a cryptic underground fungal network. When I followed the clandestine path of the conversations, I learned that this network is pervasive through the entire forest floor, connecting all the trees in a constellation of tree hubs and fungal links. A crude map revealed, stunningly, that the biggest, oldest timbers are the sources of fungal connections to regenerating seedlings. Not only that, they connect to all neighbors, young and old, serving as the linchpins for a jungle of threads and synapses and nodes. I’ll take you through the journey that revealed the most shocking aspect of this pattern—that it has similarities with our own human brains. In it, the old and young are perceiving, communicating, and responding to one another by emitting chemical signals. Chemicals identical to our own neurotransmitters. Signals created by ions cascading across fungal membranes.

The older trees are able to discern which seedlings are their own kin.

The old trees nurture the young ones and provide them food and water just as we do with our own children. It is enough to make one pause, take a deep breath, and contemplate the social nature of the forest and how this is critical for evolution. The fungal network appears to wire the trees for fitness. And more. These old trees are mothering their children.

When Mother Trees—the majestic hubs at the center of forest communication, protection, and sentience—die, they pass their wisdom to their kin, generation after generation, sharing the knowledge of what helps and what harms, who is friend or foe, and how to adapt and survive in an ever-changing landscape. It’s what all parents do.

How is it possible for them to send warning signals, recognition messages, and safety dispatches as rapidly as telephone calls? How do they help one another through distress and sickness? Why do they have human-like behaviors, and why do they work like civil societies?

After a lifetime as a forest detective, my perception of the woods has been turned upside down. With each new revelation, I am more deeply embedded in the forest. The scientific evidence is impossible to ignore: the forest is wired for wisdom, sentience, and healing.

This is not a book about how we can save the trees.

This is a book about how the trees might save us.