How to Legalize Sustainability: An Interview with Thomas Linzey 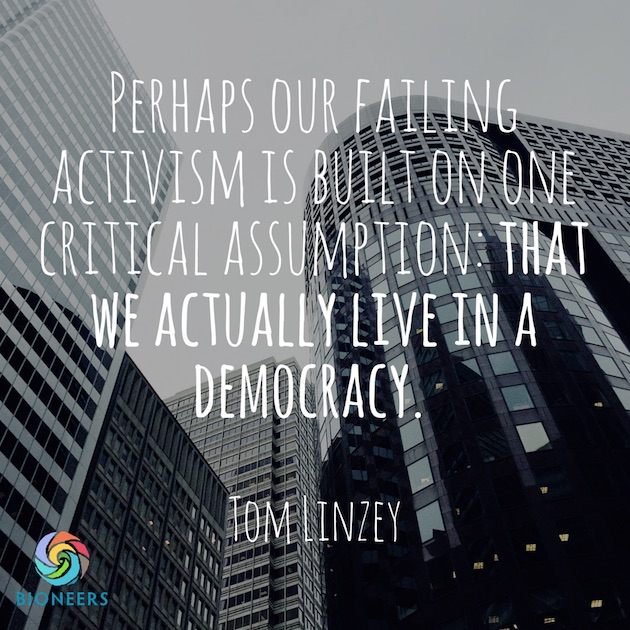 Life, liberty, and the pursuit of happiness have long been held as the inalienable rights of US citizens. Then why is it that “corporate personhood” consistently overrides the legal rights of people? And what about the rights of nature? Do rivers, mountains – whole ecosystems – have inalienable rights that guarantee their interests?

Begun as a traditional public interest law firm seeking to protect the environment, CELDF quickly realized that no matter how hard they tried to stop harmful projects, our structure of law is not only inherently unsustainable, it has, in fact, made sustainability illegal.

Today, through grassroots organizing, public education and outreach, and legal assistance, nearly 200 municipalities across the U.S. have enacted CELDF-drafted Community Rights laws which ban practices that violate the rights of people, communities and nature– including fracking, factory farming, sewage sludging of farmland, and water privatization.

Teo Grossman, Senior Director of Programs & Research for Bioneers, caught up with Thomas earlier this month to hear more from the frontlines of the growing movement for Community Rights and Rights of Nature.

TEO GROSSMAN: For those unfamiliar with the work of the Community Environmental Legal Defense Fund, can you provide a brief overview of what you do?

THOMAS LINZEY: We’re the lawyers of last resort for those communities faced with corporate projects that they can’t stop through any other means. For the past 15 years, we’ve assisted close to 200 communities across the country to adopt Community Bills of Rights which ban dangerous corporate projects, like water bottling operations, factory hog farms, and fracking.

Because legal doctrines have been manufactured over the past hundred years by corporations to shield themselves from local control when that local control seeks to stop harmful corporate projects, the laws that we help communities to write and adopt include direct challenges to corporate constitutional “rights” and other powers that have routinely been used in the past to override those local laws.

It’s our belief that, until communities have more rights than the corporations which seek to use our communities for their resources, we will be unable to create economic or environmental sustainability. In other words, we don’t have a factory farm problem or a fracking problem, we have a democracy problem.

GROSSMAN: It has been several years since you last presented at a Bioneers Conference. Has the work of CELDF changed, expanded or shifted in any significant ways? Any major success stories and/or hurdles to share?

LINZEY: The community stories that we’ve shared over the years have begun to merge. People across different issue areas now understand that their work is the same as others, regardless of what the underlying issue is. Over the past three years, communities have joined together in Oregon, Colorado, Ohio, Pennsylvania, and New Hampshire to create statewide Community Rights Networks. Each of those state organizations is now proposing state constitutional amendments that would elevate community rights above corporate “rights.” In addition, those state networks have joined together to create the National Community Rights Network (NCRN), which has now proposed a federal constitutional amendment that would recognize the authority of community lawmaking. As the community rights movement grows, these organizations give the communities a louder voice at the state and federal level.

GROSSMAN: At root, your work focuses on drawing attention to and hopefully altering the constitutionally embedded elevation of corporate rights over individuals, communities and natural systems. In an interview you gave to Mother Jones in 2006, you said the following: “The dream is that, 30 years out – and my heart sinks, because I don’t know if we even have 30 years from an environmental perspective – other places will join hands as well, and lead to a rewrite of the U.S. Constitution.” 10 years later, in the midst of a national political campaign replete with populist rhetoric, does this still feel like a dream or are we making some real progress?

LINZEY: The progress that’s being made is by individual people and their communities who are coming to grips with the fact that we don’t live in a democracy. The relatively small number of people who run this country’s largest corporations haven’t had to deal with any visions other than their own over the past hundred years, because people in each community haven’t had the legal authority to take them on.

That’s starting to change, but the institutions that have brought us to this point, including state and national political structures, will be the last ones to shift. While populist rhetoric grounded in the need for economic and environmental sustainability is a good thing, that rhetoric is usually drowned out by mainstream candidates who have more of an interest in merely “regulating” certain activities rather than stopping them completely. So, a lot of it is still a dream, but there is real progress on the ground towards people reclaiming the “we the people” of American historical lore, one community at a time.

GROSSMAN: In one of your talks at Bioneers, you said of environmental regulations: “Even when working perfectly, [environmental regulations] simply regulate the rate at which we destroy our communities and our planet.” The competing view is that if we can get that rate down to a manageable level, it’s better than nothing (this is basically the Obama Administration’s approach to climate change at the moment, leveraging existing regulations to their maximum extent.) Given the time crunch we are up against with many of these issues, is it possible to “change the system” and “work from the inside” at the same time?

LINZEY: Probably not. Almost all activist resources over the past fifty years have been focused on using tools that we’ve been given – like environmental regulations and regulatory agencies – to protect ourselves and the natural environment. There’s a belief that if we use those mechanisms enough, and if we change our own behavior enough, that we’ll be able to stop climate change in time and stop the other catastrophes that are bearing down on us. The problem is that we’ve been trying to use those tools for a long time, and we’ve been changing behaviors for a long time, but that simply hasn’t worked – things are worse now in this country than they were before the major environmental laws were adopted. “Working from the inside” means working with tools that the current system allows us to use, i.e., those tools which reinforce, and do not challenge, the basic operation of the existing system. As a colleague of mine likes to say, “If voting could actually change anything, we wouldn’t be allowed to do it.” The type of system envisioned by people at the Bioneers Conference – the type of system that will stop the planet from exploding – is so inherently in conflict with the economic system that currently exists that the two can’t cohabit the same space. One has to give way to the other, otherwise we’ll continue to accelerate our way off the cliff.

GROSSMAN: Outside the US, efforts (supported by CELDF) in countries like Ecuador and Bolivia have managed to inscribe Rights For Nature into national constitutions. Are there similar efforts in other countries? Is CELDF involved in additional work internationally?

LINZEY: We now have a program that focuses specifically on assisting people and communities in other countries to replicate the work happening in the United States. In addition to assisting people in Ecuador and Bolivia, we’ve been working in Nepal (to advance enforceable Rights For Nature in their national constitution), in India (to advance a rights of the Ganges River bill), and with communities in Canada, Mexico, Ireland, Ghana, Cameroon, Australia, and Colombia. While most of that work focuses on driving enforceable Rights For Nature and ecosystems into law, a lot of it focuses on local self-determination.

GROSSMAN: These types of ground-floor changes are inspiring to hear about, particularly given our struggles in the US. Now that it’s law, are you seeing that this is practically increasing the ability of local citizens in these countries to conserve and protect natural systems and community rights?

LINZEY: Yes. In Ecuador, cases have now been brought to enforce the rights of nature provisions in Ecuador’s constitution, and judges have held on at least two occasions in favor of an ecosystem. Of course, you’ve also had President Correa continue to be a big advocate for drilling in the Amazon, and the constitutional provisions haven’t been able to stop that drilling, but this type of paradigm change never comes all at once. In the United States recently, with our help, a watershed in Pennsylvania filed to intervene in a case brought by an oil and gas corporation against a community which banned a frack wastewater injection well. So, there’s a growing recognition of how these laws aren’t just for show, but can be used to strengthen community fights against these often-global corporations.

GROSSMAN: Are there any particular efforts, campaigns or local/national news stories that we should be aware of, that may be flying under the radar or not getting the coverage or attention they deserve (domestic or international)?

LINZEY: There’s an incredible fight happening in a small rural community in western Pennsylvania. In 2014, the elected Supervisors of Grant Township, a municipality of about 700 people, adopted a community bill of rights guaranteeing clean air, clean water, and a sustainable energy future to the people of Grant. The law banned frack wastewater injection wells within the Township, while removing certain powers and “rights” from oil and gas corporations within the municipality, and recognizing the rights of ecosystems. The Township was then sued, and they’ve been fighting the lawsuit ever since. In October of 2015, a federal judge overturned six sections of the law, and in response, the people of the Township overwhelmingly voted to become a “home rule” municipality.

By transforming their municipal government, the Township nullified most of the judge’s ruling, and they adopted a new municipal Charter, which again banned frack wastewater injection wells, while removing corporate “rights” and powers from oil and gas corporations, and recognizing rights for ecosystems within the Township. The oil and gas corporation has threatened to sue the Township again, and it’s pressing for at least half a million in damages as a result of Grant’s law. The Grant Supervisors have publicly declared that they will file for bankruptcy if a damage award is issued by the court.

The battle is a long way from being over, but it would be the first municipality in the United States to not knuckle under to a corporate challenge, but declare that the battle is important enough to bankrupt the Township.

Check out Thomas’s terrific book Be the Change: How to Get What You Want in Your Community (co-authored with bioneer Anneke Campbell) which details this growing movement and shows the arc of genuine political revolution brewing at the grassroots level across the US.