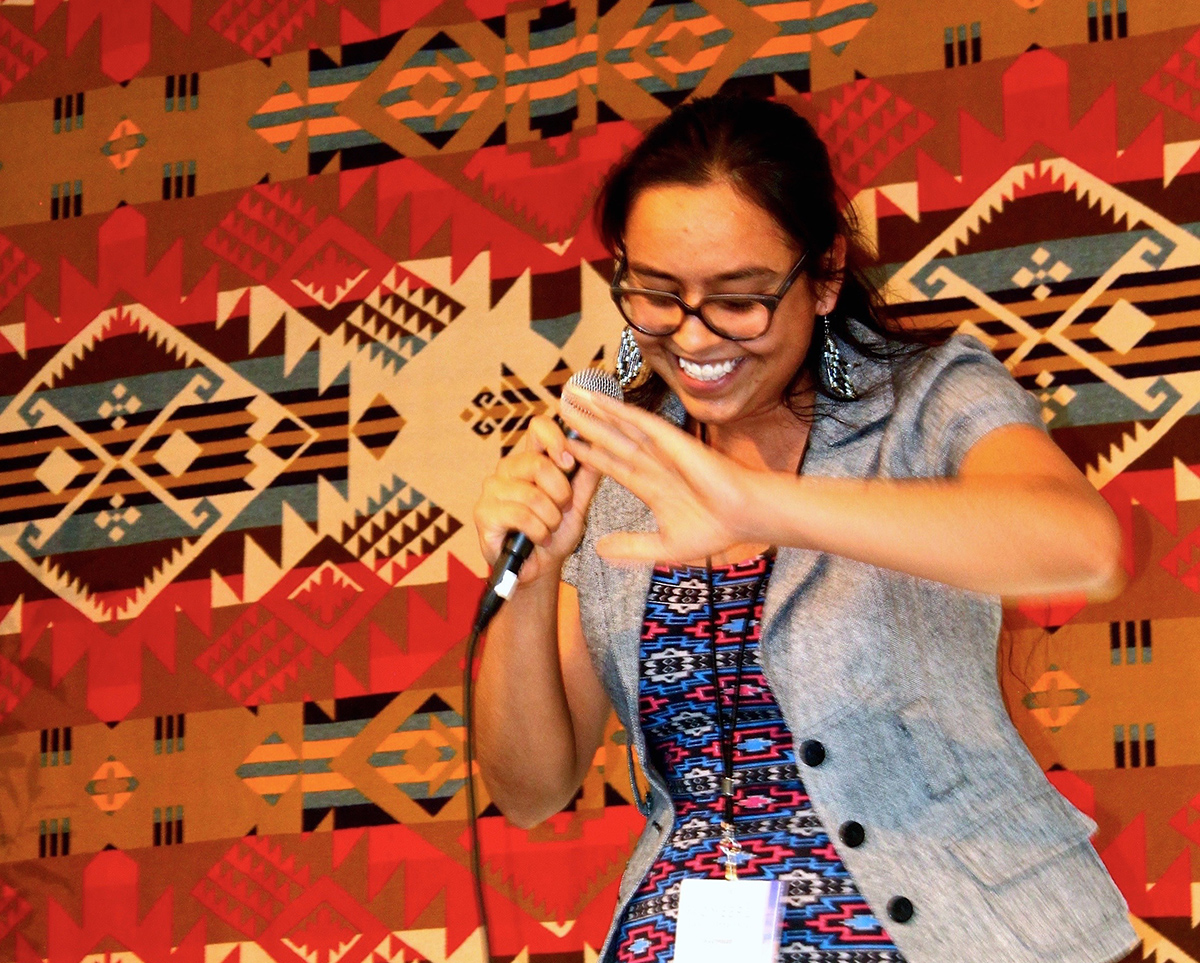 Lyla June is a Native American (Dine´/ Cheyenne) poet, peacemaker, musician and activist dedicated to revitalizing spiritual relationships with Mother Earth and cultivating forgiveness and reconciliation. We’re pleased to be hosting her on the main stage at the 2018 Bioneers Conference for a keynote address this fall. However, this year will not be Lyla’s first appearance at Bioneers…

In 2011, I organized the first annual Poetry Slam at the Bioneers Conference Youth Unity Center, which has evolved into a brave space where youth challenge the system, reveal personal trauma in search of healing and articulate their aspirations for a better world.

My original vision was a much smaller one, a competition among poets with audience members deciding who would advance to the next round with one winner emerging from the final round.

The Thursday before that first poetry slam, I met Lyla June at Just Us for Food Justice (JU4FJ), a one-day Bioneers event where young food justice activists meet, build the movement, learn inner resilience skills and share stories. Gerardo Marin, whose big heart and clear thinking make him a close ally to many Bay Area front line activists, invited Lyla to lead the spoken word session at JU4FJ. Lyla kicked off the session with a poem she wrote called Dawn that begins with:

the sun is conquering the sky

and my grandmother and I

are heaving prayers at the horizon”

The poem interprets the complex meaning of the word “hozho” from her Native Dine´ language, and is an awe-inspiring blend of traumatic history, sacred worldview and transformation. The power and beauty of Lyla’s words blew me away. I immediately invited her to the Poetry Slam.

Two days later at the Slam, not surprisingly, Lila was chosen as the winner. When she was being presented the $75 prize money, she said, “Screw winning, screw hierarchy!” and she began to share the money with all the other poets. This spontaneous act of revolt against the competitive structure ignited the audience. Without any prompting, audience members dug into their pockets to contribute to the purse, swelling the prize money to more than double its original amount, which was equitably distributed among all the poets.

I was delighted to see my original idea dismantled to have something much more elegant, respectful, and acknowledging take its place. Now at the Slam, it is common for seasoned poets, as well as first time poets, to rip open people’s hearts with their raw emotion and authenticity. It is a dynamic spontaneous place of celebration, hard truths, and healing.

On the Writing for Peace website Lyla wrote, “Writing for peace means: Praying before each line is written that the Great Spirit’s message comes through. The root word of genius is, ‘genie,’ or spirit. And so, the true genius does not take credit for her/his work. Rather s/he celebrates the fact that they were able to move out of the way enough for Spirit’s masterpiece to flow through them.” Lyla’s poetry is one way she expresses her dedication to forgiveness and fuels her passion as a non-violent warrior for peace.

At the 2017 Geography of Hope conference, Lyla spoke about the power of forgiveness, recalling her time as a Water Protector at Standing Rock when police fired rubber bullets; threw tear gas grenades; sprayed mace; attacked with dogs; and, in 20 degree temperatures, used fire hoses against non-violent protesters who were trying to protect the water supply and cultural artifacts of the Standing Rock Sioux Tribe from the construction of the Dakota Access Pipeline.

She described how she participated in a circle of forgiveness at the Morton County Jail where other Water Protectors were being held and where women were being strip searched. A thousand people surrounded the jail and “sang songs of forgiveness, of life, and beauty and healing.”

We are excited and honored that Lyla June will be giving a keynote presentation at the 2018 Bioneers Conference, October 19-21.