The Prince of Mutual Aid: Homage to Pyotr Alexeyevich Kropotkin 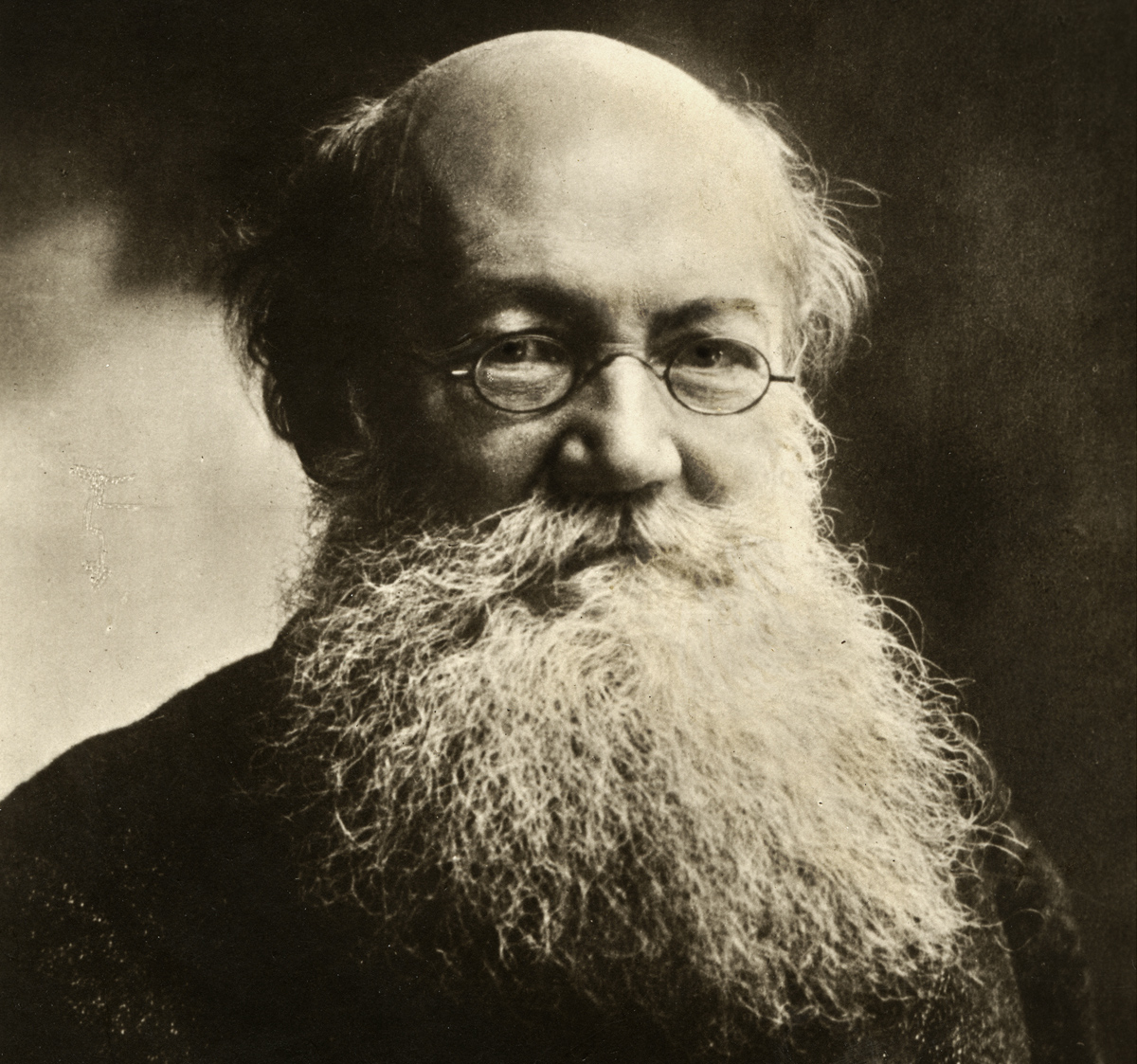 The following essay was written by author and Bioneers Senior Producer J.P. Harpignies. The views and opinions expressed are his own and do not reflect the official policy or position of Bioneers.

The last several months the term “mutual aid” has come up quite a bit in public discourse to describe the wide range of neighborhood/community-based altruistic behaviors that have arisen in response to the Covid-19 pandemic. The contrast between this outpouring of so many inspiring, grassroots acts of solidarity with the also widespread manifestation of extremely selfish behaviors has reminded me of the ideological battle that prompted a remarkable historic figure, the aristocratic Russian anarchist activist/philosopher/scientist/naturalist/geographer/biologist, etc, Prince Pyotr Alexeyevich Kropotkin, to pen a now infrequently read but, in my view, absolutely seminal text, Mutual Aid: A Factor of Evolution, in 1902.

Kropotkin has not been totally forgotten. His name comes up on occasion in articles when a writer seeks to excavate the roots of the concept of mutual aid, and scholarly books about him appear once in a while, but, by and large, he’s read by very few people these days, and he’s hardly known to younger generations. This wasn’t always so. In the early 20th Century, even though he was an anarchist revolutionary who spent time in prisons, he was also an international intellectual superstar. Oscar Wilde even described him as “a beautiful white Christ.”

One reason I wanted to pen this little homage to him here on the Bioneers site is that I think a strong case can be made that he is the single most important forebear of so many of the themes that are central to our own work. Kropotkin’s ideas laid a very solid, rigorous intellectual foundation for a great many of the most progressive socio-political tendencies of the 20th and now the early 21st century, from awakened ecological awareness to a respect for Indigenous life-ways to an emphasis on egalitarian relationships and cooperative, decentralized economic systems. When our great friend Jeremy Narby discusses “Intelligence in Nature” or our allies at the New Economy Coalition advocate worker ownership of enterprises, just to cite two random examples out of so many in the Bioneers community I could cite, they are standing on Kropotkin’s shoulders. In fact the entire “green” movement owes a huge debt to the anarchist prince.

Kropotkin did not invent the concept of mutual aid and was not the first European thinker to emphasize cooperation among animals. Such illustrious figures as Goethe and Alexander von Humboldt had discussed it here and there, and the German/Russian zoologist Karl Fedorovich Kessler (1815 – 1881) who was a strong advocate of the importance of cooperation within animal species had a profound influence on Kropotkin, but Kropotkin built on these antecedents to develop a much broader theory of the fundamental role of cooperation in all of evolution and in human social development, so he became the figure whose name is forever intimately tied to the concept of mutual aid.

Today those who recognize Kropotkin’s name at all think of him first and foremost as an anarchist activist and philosopher, but while he was clearly that, people have forgotten that he was a great scientific observer and thinker in many different disciplines, one who has not gotten his proper due in the history of science. In my view it is in his critique and demolition of “Social Darwinism” that he made his greatest contribution, the one that resonates most strongly with contemporary ecological consciousness and social justice movements, because we are still very much locked in battle with contemporary proponents of variants of social Darwinism.

Kropotkin enthusiastically embraced Darwin’s basic tenets about evolution and natural selection, but he felt that the (unfortunately predominant) wing of Darwin’s followers known as “social Darwinists” (most prominently Francis Galton) had in fact distorted Darwin’s legacy by overemphasizing the role of savage competition to the exclusion of the equally important factor of cooperation in securing the survival of species. These thinkers were, in Kropotkin’s view, not only misguided but dangerous because their ideas were invoked by capitalists and authoritarians as justifications for a brutally competitive society, rigid hierarchies and grotesque levels of inequality. His attack on these thinkers echoed the earlier fundamental philosophical battle between Hobbes’ pessimism and Rousseau’s optimism as regards human nature, which helped define the core right/left ideological divide in Western thought for at least two centuries, but, unlike Rousseau, Kropotkin was able to build his views of evolution and of human nature on a solid scientific foundation.

His extensive and detailed observations of myriad animals in his geographic mapping expeditions, especially to Siberia, revealed to him just how critical cooperative and often altruistic behaviors were in the preservation of a given species, and that these were not purely reducible to “instinct.” He was a century ahead of his time in recognizing that various forms of intelligence, adaptation, and decision-making permeated the natural world, and that humans were not separate from the continuum of the web of life. So his social utopianism (while, in my personal, subjective view, most likely unattainable in a pure form in a world with 7 to 11 billion people on it) was grounded in a rigorous observation of nature.

Kropotkin was really the first Western thinker to build a cogent theoretical edifice based on extensive evidence that convincingly argued that cooperation was at least equal to competition as a fundamental cornerstone in evolution and that a capacity for cooperation was in fact the key factor to a given species’ success. This is a view that remained marginal until just the last couple of decades but that is now far more accepted by many in the scientific mainstream as more and more research on animal (and plant and fungal!) cooperation, symbiosis and intelligence emerges almost weekly. Over the years we have had such renowned figures as Jane Goodall, Carl Safina, Paul Stamets, Lynn Margulis, Monica Gagliano, and the aforementioned Jeremy Narby discuss different aspects of this type of research at the Bioneers Conference.

And, most relevant to this discussion, Kropotkin felt that this far more holistic grasp of evolutionary mechanisms had immense implications for human societies, and that, while of course strong competitive urges existed in all of us, a sophisticated understanding of nature had to lead us to believe that cooperation and free, mutual exchange should be the central organizing principles of human communities. He argued that most Indigenous cultures and early societies were mostly so structured, and that the hyper-competitive, selfish, hierarchical, exploitive socio-economic models promoted by social Darwinists and robber baron capitalists were recent aberrations that needed to be relegated to the “trash heap of history.”

So as we seek to navigate our way through the enormous crises we are currently in the midst of, from the pandemic to climate change to ever more glaring inequality and injustice to the unraveling of so many of our institutions and social norms to the global rise of far right authoritarian political forces, and we see flickers of hope pointing toward a far more harmonious, life-affirming civilization in the remarkable groundswell of grassroots altruism, solidarity and cooperation we are witnessing around the world, let’s take a moment to honor one of the great ancestors who helped point the way to a far more satisfying and accurate understanding of our place in the web of life and, one has to hope, ultimately to far more humane social structures, Prince Kropotkin.