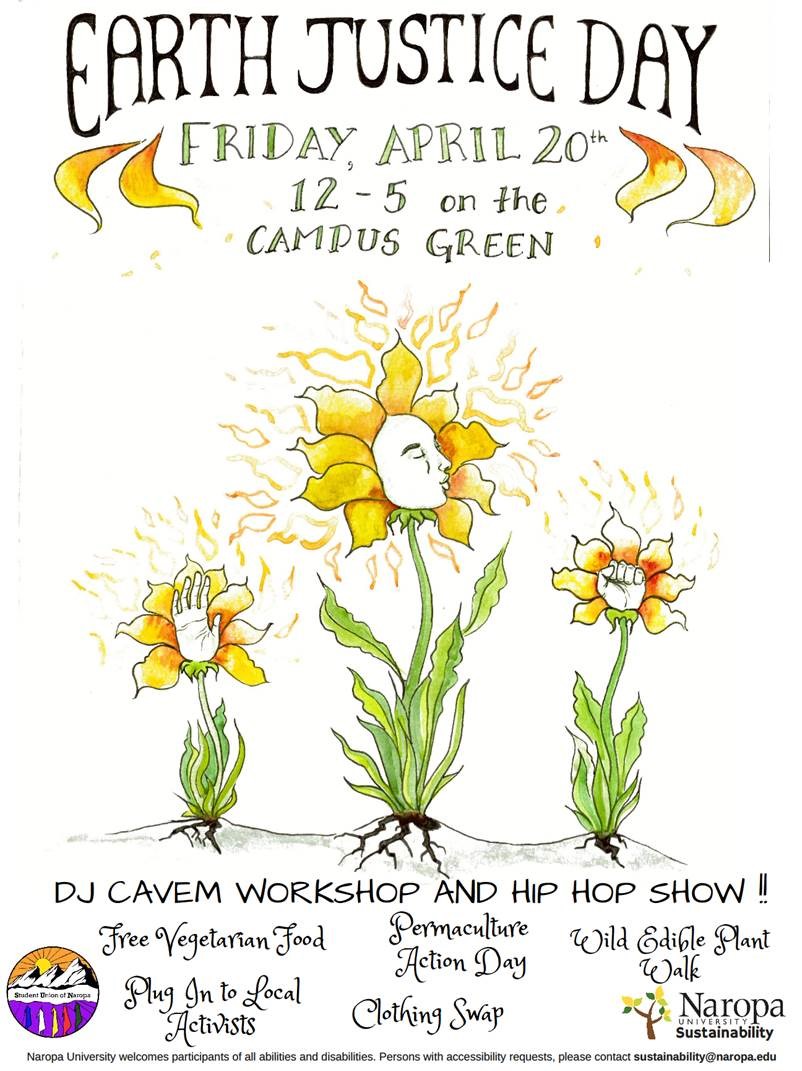 The oppression of people and the oppression of Earth go hand in hand. This is an understanding shared by the students, faculty, and staff of the BA Environmental Studies, MA Resilient Leadership, Center for Inclusive Community, and Office Sustainability at Naropa University in Boulder, Colorado. In 2016, representatives from these areas came together and changed the April 20 tradition of Earth Day to Earth Justice Day. The intent of this action was multiple. First, it was a way to honor the one-year anniversary of Decolonize the Commons where in April and May of 2015, a group of diverse students, allies, and community members, camped on the Naropa green in order to raise awareness and take action against systemic white oppression at Naropa. Second, it rooted into the core values of interconnectedness and understanding that ecological and social issues are not separate concerns; rather they are part of interlocked systems of oppression. Finally, Earth Justice Day serves to honor Naropa’s commitment to take action on these values.

Naropa University is a small private institution that is Buddhist-inspired and a leader in mindfulness awareness and contemplative education. Founded in 1974, it has a legacy of activism for both ecological and social concerns rooted in mindful awareness and compassionate action. The students at Naropa have been leaders in making positive changes on and off campus, participating in community service and activism. These include helping Naropa: switch to wind power, divest from fossil fuel, offering a more diverse and ecologically centered curriculum, offering permaculture courses, creating a greenhouse and food forest, having a bike share program, becoming zero waste, creating a Center for Inclusive Community, hiring a Director of Sustainability, and engaging in socially responsible investing. The small size of the institution affords more participatory democratic decision- making and inclusive community. The creation of Earth Justice Day in 2016 followed along this tradition.

In rooting in the awareness that the oppression of people and the oppression of earth go hand in hand, there is a recognition that ecological and social issues arise from the same roots. Both are results of systems of exploitation. When addressing issues of racism, it is essential to trace these forms of oppression to their roots. In order to adopt an approach that is embedded in social action and supports human rights on the largest scale, it is necessary to understand the link between social and ecological injustice.

While it is wonderful that Environmental Justice is becoming more and more recognized as important to the Environmental Movement, often it is viewed as a side dish to the larger movement.

In essence, it is the main dish because the oppression of the earth has always gone hand in hand with the oppression of people – these are not separate occurrences. We see this when we trace the history of the founding of this country where specific cultural groups – Native Americans, African Americans, Europeans, Latino Americans, Asian Americans, where exploited for cheap labor that directed coincided with exploiting the land. Professor of Environmental Studies and MA Resilient Leadership, Dr. Jeanine Canty speaks to this directly in a recent podcast.

The first few Earth Justice Days have been filled with both educational and community centered events that include speakers, experiential workshops, art, dancing, food, planting food, clothing swaps, music, and all around fun. By embracing the seriousness of these issues and allowing the heavy emotions surface, the community is able to also ground in positive emotions and actions to alleviate suffering. While Naropa University is proud to be the first university to replace Earth Day with Earth Justice Day, it hopes that others will follow suit and this will become and common value for all.