Oklahoma Tribes Under Attack from State 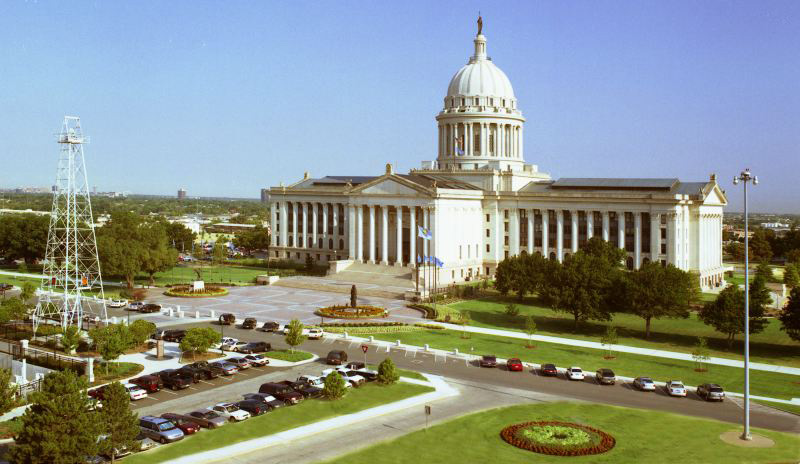 In their recent McGirt v. Oklahoma decision, the Supreme Court ruled that Native American reservations comprise nearly half of eastern Oklahoma. Tribes are widely celebrating this decision as it defends their tribal sovereignty, but now they’re facing a big challenge as Oklahoma governor Kevin Stitt is calling to override the McGirt decision and force fracking and drilling on the state’s tribal territories.

A new press release, jointly released by two Bioneers alumnae — Casey Camp Horinek, Environmental Ambassador of the Ponca Nation of Oklahoma, and Pennie Opal Plant, co-founder of the nonprofit organization Movement Rights — serves as a call to action by illustrating the scope of implications for indigenous rights and the environment. Read the full report below to learn more about this pressing issue and what you can do to help.

WHITE EAGLE, OK: Following decades of broken treaties, brutal forced removals and diminished tribal authority over their own lands, in a July 2020 landmark decision, the US Supreme Court ruled that much of Eastern Oklahoma falls within Indian reservations. Known as the McGirt decision, it is a victory for tribes with far-reaching implications, including affirming tribal sovereignty over environmental lawmaking. OK Governor Kevin Stitt (R), has already announced his intention to undermine the SCOTUS decision by stripping environmental authority from tribes and placing it under the auspices of the EPA.

“The actions of Governor Stitt are not surprising,” says Ponca Tribal Environmental Ambassador, Casey Camp Horinek, “The State of Oklahoma was founded on racism, and Stitt follows a long line of governors who have considered tribes sacrifice zones for fossil fuel industry profits.” In recent years Oklahoma has shifted its economy to become a fossil-fuel dependent state, now home to the largest convergence of pipelines in the US, a fracking boom, and fracking wastewater injection-wells resulting in massive man-made earthquakes.

Much of these oil and gas activities are placed on or near tribal land, contaminating soil, rivers, aquifers and air while adding to the climate crisis and directly impacting community health. “Tribes across the state have been targeted for environmental genocide at the hands of the oil and gas industry, enabled by state agencies and government officials, including the Governor’s office,” says Horinek, “and it all comes down to money.”

Governor Stitt, who has already received $239,102 in oil and gas industry donations since his November 2018 election, is asking the Trump-era EPA to override the Supreme Court and give his state control over environmental regulations on Native American reservations—including regulating fossil fuel activities. While the SCOTUS ruling has clearly empowered tribes to enforce their own environmental laws, Stitt believes he has found a loophole. In 2005, a “midnight rider” was quietly attached to an unrelated federal highway bill that Stitt claims requires tribes within Oklahoma to request permission from the state to be treated as sovereign states.

“Tribes are already sovereign, despite decades of attempts to diminish our authority over our own lands to protect our communities and make laws governing clean water, air and soil,” Horinek says. “On Ponca territory, our well water is so polluted from industry activities we now must buy water for our community.” In 2017 the Ponca banned fracking and became the first tribe to pass a statute recognizing the Rights of Nature to be free from fossil fuel contamination by asserting that ecosystems, including humans, have legal standing in a court of law.

Pennie Opal Plant, co-founder of the Indigenous and Rights of Nature organization, Movement Rights, says, “Following the Ponca, several other tribes across the US have also recognized Rights of Nature as law consistent with their Indigenous values and traditions, and as a way to protect clean water, air and soil not only for their tribes, but for everyone. We all live downstream and downwind from fossil fuel pollution and we all share the same climate.”

Fighting for Industry profits is not the first time Governor Stitt has attempted to thwart existing law when it comes to Native American tribes in Oklahoma. He has also been in a pitched battle with the 39 federally-recognized tribes over casino profits. While not all tribes operate casinos, through a state compact that was set to automatically renew in January, the state receives between 4-6 percent of gaming revenues, generating about $184.3 million in 2020 alone for the state’s Education and General Revenue Fund. Despite the automatic 15-year rollover renewal of the Compact, Governor Stitt wants to renegotiate more money from tribes.

With growing unrest among many tribes and communities about the role of fossil fuels in the state in 2017, Oklahoma was among the first to pass anti-protest laws. It is now felony with a mandatory $10,000 minimum fine to block or impede fossil fuel operations. Oklahoma’s law is unique in that it also broadly targets groups and organizations “conspiring” with protesters. This law paved the way for TC Energy’s Keystone XL pipeline extension, poised to move through Oklahoma, including through reservation land beginning this year. It is unclear whether the SCOTUS ruling would enable protestors to blockade the project on tribal land with tribal permission, yet another reason Stitt is keen to work with GOP lawmakers to put tribal land under EPA control.

“It is more race-baiting,” says Horinek. “The tribes impacted by the Supreme Court’s McGirt decision and all tribes in the state must stand together. Our very existence is at stake. If Stitt has his way the fossil fuel industry will line his pockets with our lifeblood.”