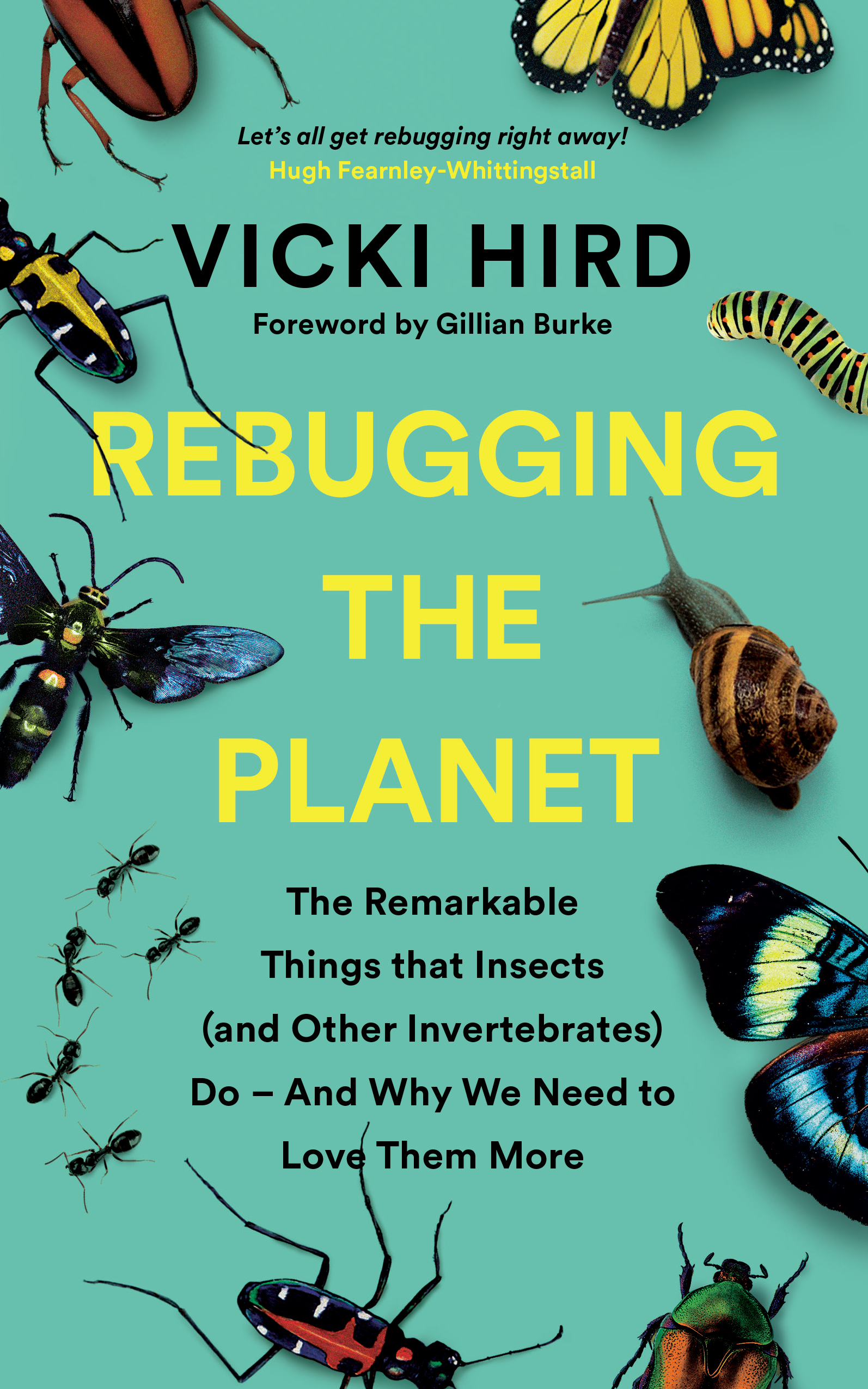 The following excerpt is from Vicki Hird’s new book Rebugging the Planet: The Remarkable Things that Insects (and Other Invertebrates) Do – And Why We Need to Love Them More (Chelsea Green Publishing, September 2021) and is reprinted with permission from the publisher.

Why Rewildling Our Landscapes Needs to Include Bugs

What is rewilding? Basically, it’s the attempt to recreate the natural ecological systems that once covered our landscapes — woods, rivers, wetlands — and trusting nature to look after itself, perhaps with some help at the start to fix the most broken pieces.

Many rewilding projects are large in scale, to allow nature to really do its stuff without interference and pollution from us. It is about vast estates and landscapes, large herbivores or carnivores and huge decisions made by distant landowners or institutions. These are invaluable. But is not always about completely removing people — after all, humans are part of the natural world.

Instead, we need to find new ways to live while reconnecting with the ecosystems we live in, creating a richer world in which people and nature can thrive together. We can live alongside more bees, worms and flies, and I believe there is a benefit to taking the debate on rewilding down to the tiny scale of some of the smallest creatures on the planet.

Invertebrates are core to any rewilding project: ideal foot soldiers for the cause at every level as they travel, adapt and multiply so brilliantly. And, aside from farmed honeybees, silk moths and biological control agents, almost all the invertebrates we encounter, wherever we encounter them, are wild. They may be there because we created the environment for them, but they are not domesticated or tame — or even that interested in us.

How Does Rewilding Help Bugs?

Rebugging is looking at the ways, small and large, to nurture complex communities of these tiny, vital players in almost all the natural and not-so-natural places on earth. It means conserving them where they are managing to hang on, and restoring them where they are needed as part of a rewilding movement. And it means putting bugs back into our everyday lives, our homes and where we play and work.

But what does “good” look like for the bugs? We need to better know what the “perfect” habitats and conditions would be for bugs to thrive: the baselines against which recent losses occurred. We can’t tell what the true losses are as we don’t know what was there before people arrived, or even a hundred years ago. But how exciting to discover more new insect habitats through rebugging, as we let nature make its way.

Even rewilding a relatively small area can create something akin to the original habitats of the invertebrates, and we will discover so many intriguing aspects in the process. Rewilding projects are already throwing up some challenges to our previous knowledge about their favored habitats as species take to a habitat in a rewilded area that we had no idea they liked.

Which animals belong where is a fascinating issue in rewilding. It can involve reintroducing a species to re-establish it or to boost numbers of a native animal or plant at risk of going extinct. Or it can be about recreating an ecosystem that has got out of balance, such as a flood plain that needs the plants and animals back to slow water flow.

Would we want to bring invertebrate species back into countries and regions that have lost them? The removal of keystone species — a species that is fundamental to the existence of a particular ecosystem — can be catastrophic for a wild ecosystem, but reintroduction can work in unforeseen ways.

The reintroduction of wolves to Yellowstone National Park in the western U.S. created unexpected and positive results for the park ecology. When wolves were removed from the park 70 years ago, elk overgrazing became a problem and only resolved when the wolves were reintroduced, and so elks were naturally managed better. But there was a further impact: beaver populations grew now that their willow trees were not overgrazed by the elk. This created new fish and water invertebrate habitats, which then influenced other species feeding on the bugs and fish. Everything is connected, and while many focus on the furry vertebrate species, we need to recognize and nurture the bugs, too, as vital parts of the arrangement.

Beavers are also being reintroduced into UK river systems, leading to new habitats, more diversity, and even floodwater management and boosting green tourism. Sometimes iconic species can be hugely important for building public support for conservation, but also can help fund projects through carefully managed tourism.

But what about invertebrates? Rebugging could allow species lost to an area to be introduced successfully and this is indeed happening.

Given their size and ability to produce numerous offspring quickly, invertebrates have the wonderful ability to recolonize far more quickly when they spot the opportunity than larger species. Just take the aphid, which can produce five to 10 offspring every day. The African driver queen ant can produce an estimated three to four million eggs a month. And they do not need so much careful handling as, say, a wolf.

However, it makes sense also to focus on protecting the native bug species that are still in their habitats, but are just hanging on in pockets of scrub, hedgerows or small woodlands, and even urban parks, where once their habitats would have been far more widespread. And they can help rewild the small spaces as well as the big ones.

Critical to keeping places wild and protected will be helping people to have a stronger relationship with nature. Making public access safe and easy in rewilded space will help create a movement for rebugging. Great wilderness parks such as the 63 federally designated U.S. national parks present a whole other level of invertebrate opportunity. As these areas are managed by government bodies largely for wildlife, rather than farming or other purposes, they can be described as wild — and over 80% of the areas involved are managed as wilderness.

They maintain some of the best habitats, perfect for invertebrates to thrive. This is an extraordinary asset, but one which compares dramatically with other land management in the U.S.: the empty prairies and often car-filled cities, where insects and other invertebrates are subject to massive pressures from industrial farming, pollution and development.

Take the sub-arctic Denali National Park and Preserve in Alaska where there is an abundance of invertebrates such as bees and flower flies. People visit this park to see the grizzly bears but the other fur-covered animals should also gain attention. Alongside the flies, the bumblebees are critical for pollination and they have recently found a new species of bumblebee in this park — always an exciting moment.

These are keystone species and the Denali park’s grizzly bears, caribou and wolves would not survive without the bugs because they all need the wildflowers and shrubs for their food or the food of their prey. The grizzlies in particular need the bees to pollinate the blueberries, one of the bear’s main foods. As we know, honeybees are under threat globally, so it is vital that we protect the other pollinators like bumblebees so they can pollinate both wild plants and farmed crops.

Wildlife parks do have threats such as the pressure of visitors, especially at peak holiday periods. Other dangers respect no boundaries — for instance, climate change, illegal hunting and invasive species. But these places provide a fantastic way to conserve bugs in their natural world and to show what they can do.

The joy of rebugging is that you can do it almost anywhere. Give people the chance to act and to encourage some bees, or even hummingbird hawkmoths, in a green patch of land, and you can start to change hearts and minds. From a Costa Rican municipality giving bees citizenship to an amazing three thousand food-growing spaces making space for nature in London, it is possible — and it is happening.

The “rebugging” title of this book was inspired by another, recent book Rebirding: Rewilding Britain and its Birds by Benedict Macdonald, who argues that to have more birds around, larger mammals must be allowed to do their work and re-engineer the landscapes. Letting nature heal itself and letting it get messy is key to a revival in birds and other species. If we can use the lens of birds and beavers to understand rewilding, we should also use bugs.

Vicki Hird is Head of the Sustainable Farming Campaign for Sustain: The Alliance for Better Food and Farming, and she also runs an independent consultancy. An experienced and award-winning environmental campaigner, researcher, writer and strategist working mainly in the food, farming and environmental policy arenas, Vicki has worked on government policy for many years and is the author of Perfectly Safe to Eat?: The Facts on Food. Vicki has a masters in pest management and is a fellow of the Royal Entomological Society (FRES).