We All Rely on Soil — But We Treat It Like Dirt 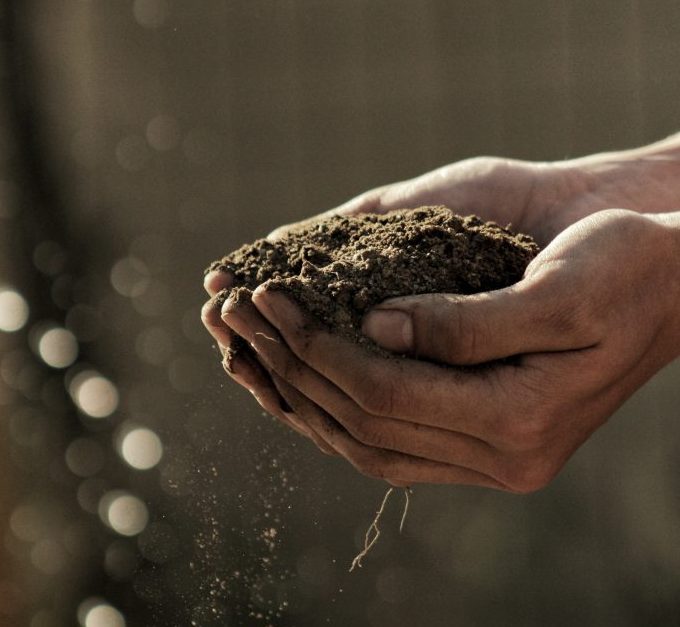 By Sara Newmark, Vice President of Social Impact for Foodstate

This article was originally published in B the Change, which exists to inform and inspire people who have a passion for using business as a force for good in the world.

You’ve likely seen the bumper-sticker and t-shirt slogan, “No farms, no food.” In truth, it only tells part of the story. A more accurate bumper-sticker slogan would be less catchy. It would reflect the interdependence of all of us with the soil, water, climate and farmers we depend upon for the nourishment for life.

The business community, especially those directly profiting from farmer’s labors and selling food products, has a responsibility to support our farmers, who provide us the nourishment for life, in a way that creates shared value. And because our food system depends upon the health of our environment and will be greatly impacted by the effects of climate change, the business community has a responsibility to protect the environment on which it relies.

Frankly, we’re not sharing well now. The current structure of business disproportionately favors packaged-food companies and disfavors those who engage in the surprisingly risky business of growing healthy food. Many, if not most, packaged-food companies are far removed from the men and women who grow food for them. This distance makes it easier to undervalue their work and it makes it harder for consumers to know whether farmers are well-compensated and following best practices. And it makes it nearly impossible for all of us who eat to recognize the relationship between farming and climate change.

I recently joined Foodstate (makers of MegaFood and Innate Response) as their new Vice President of Social Impact. While I was drawn to the company’s deserved reputation for high-quality vitamins and whole-food supplements, what really attracted me was Foodstate’s commitment to nourishing people by sourcing directly from small, independent family farms.

Part of my new work is to help people see the connection between farmers and health and to do it in a way to make sure we all prosper. Foodstate has a mission to cure nutritional poverty. A key part of that is helping solve the root cause of nutrient deficiency. A recent study published in ACRES magazine found 27 vegetables had an average 47 percent decline of their calcium levels from 1940 to 1991. While this decline is linked to many potential causes, declining soil health is among the top likely suspects.

No Healthy Soil, No Food

Around the planet, we have lost between 30 and 70 percent of all topsoil. At the same time, several hundred billion tons of soil CO2 have been transferred from topsoils to the atmosphere or the oceans because of the global destruction of soil organic matter. In other words, 25 to 40 percent of the current excess of CO2 in the atmosphere resulted from the destruction of soils and their organic matter.

As a consequence, the United Nations estimates that the world has 60 global harvests left. That’s 60 more times the world, if it stays on it current trajectory, will be able to grow and harvest food.

How did we get to this point? We killed and tilled. The model of conventional agriculture — using high levels of synthetic nitrogen, herbicides, GMOs, monoculture plantings and deep, regular tilling — has devastated soils and damaged ecosystems worldwide. Instead of drawing down carbon via photosynthesis, as ecologically sound methods of food production have always done, this highly industrialized and destructive growing method actually pumps carbon into the atmosphere, where it drives climate change.

But can we grow more food; enjoy greater resilience in the face of drought and climate extremes; and, at the same time, grow food that is more plentiful, nutritious, and inexpensive?

Believe it or not, the answer to all the above is a resounding “Yes!” But it’s all based on healthy soil.

“Regenerative agriculture” is defined by The Carbon Underground and Cal State/Chico “as farming and grazing practices that, among other benefits, reverse climate change by rebuilding soil organic matter and restoring degraded soil biodiversity — resulting in both carbon drawdown and improved water cycle.”

Specifically, regenerative agriculture is a holistic land-management practice that leverages the power of photosynthesis in plants to close the carbon cycle and build soil health, crop resilience and nutrient density. It is an agricultural model that recognizes, respects and contributes to the interdependence between all human life, business, food and the soil and climate on which they depend.

By increasing water-holding capacity and sequestering carbon at greater depths, regenerative agriculture increasing biodiversity of soil-building organisms and the plants grown in that soil. And it draws down climate-damaging levels of atmospheric CO2 and improves soil structure to reverse civilization-threatening soil loss. Regenerative agriculture reverses our current trajectory to build for the future.

Farmers can’t be expected to reverse the damage all by themselves. We are all interconnected and we share the responsibility to change this destructive system.

We need to act quickly and deliberately. Remember, we only have 60 harvests left. Let’s act in a way that lifts all of us up and leaves no one behind.

If you are a business that relies on agriculture, investigate your supply chain. Peel back the layers and get to know the farmers who support you. Think about creative ways to encourage and co-share economic rewards, such as long-term contracts, incentive programs, in-setting or other ways to protect and uplift everyone in your supply network.

If you are a farmer, learn more about the tools, standards and programs that are being worked on (even as you read this article) to support you in this mission. We need your expertise and input to make sure we are all on the same page.

If you are a consumer who eats food, wears clothes or drinks clean water (all of us!), demand this from all companies from which you purchase goods.

Everyone reading this, I want you to take a hard look around you. We face an almost certain collapse of the planetary ecology we require for our continued existence. And we have a “shovel-ready” answer that rebuilds livelihoods, builds community, increases profits, fosters business resiliency and turns the carbon arrow back, healing the planet.

And it can start happening immediately. We all have a role to play in this.

Foodstate is part of the community of Certified B Corporations. Read more stories of people using business as a force for good in B the Change, or sign up to receive the B the Change Weekly newsletter for more stories like the one above, delivered straight to your inbox.