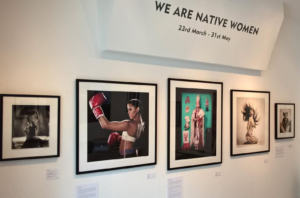 Cara Romero (Chemehuevi), has been directing the Bioneers Indigeneity Program for seven years. During this time, she has formalized the Indigeneity Program. She has strengthened the Indigenous Forum Panels that feature some of the most urgent and fascinating voices from Native America today, and she has also developed go-to resources for Native change makers and our allies.

However, a lot of our Bioneers Community doesn’t know that she is ALSO a world-class, award-winning photographer. 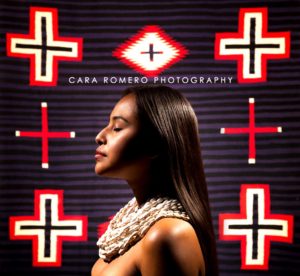 I interviewed Cara in the current issue of First American Art Magazine, which features one of her haunting images on the cover.

Here’s an excerpt of the article introduction: 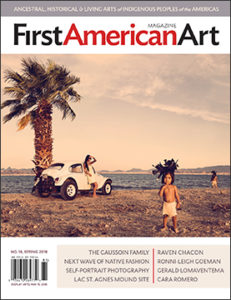 Cara Romero’s work has matured and seasoned over the past 5 years, as her imagery –which has ranged from Indianized pop culture satire to otherworldly Pueblo figures— continues to push the boundaries of “Native American photography” to convey the complex and sometimes messy lived realities of contemporary Native women.

I recently had a series of conversations with Cara about her art. I know her backstory –that she was conceived on the Chemehuevi reservation, but born in LA, only to return and grow up on the reservation, free to roam the deserts and play endless hours in the waters of Lake Havasu, under her Chemehuevi grandmother’s care. Her parents’ eventual split forced Cara to Houston as an adolescent, where she weathered her time taking anthropology and art classes, moving from Texas to Santa Fe, Oklahoma and back again, until she found herself back in the womb of her reservation. But, Cara’s need to make art forced her to face her own demons and called her back to finish her degree at the Institute of American Indian Arts…

In the article, we talked about things that are interesting to us, like how to learn how to “make it” by investing in yourself despite living through intergenerational trauma and drug abuse.

In recent years, she has begun to become known for her figurative portraits of strong Native women.

Here’s what Cara had to say when I asked her about what her art elicits in diverse audiences; 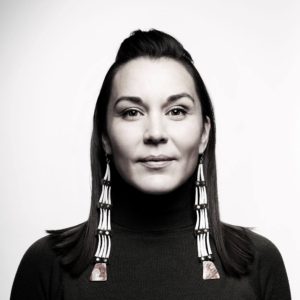 “I found the response in Indian Country, and particularly among women, has been overwhelmingly loving. Women have told me, ‘This is how I feel about my body too.’ And even other women of color have come up to me and said, “When are you going to do this for black women?”

But this is only my story to tell [and] I will continue because there’s a truth that has to be told. We need to find a way to push the envelope and to reclaim figurative art in the Native art world because we have been abused, and we have been put in a box, and I don’t believe in staying silent on that matter.”

You can get to know Cara more by purchasing a digital copy of First American Art Magazine, and supporting Native American art, here. And, if you happen to be in Phoenix March 3-4, you can also see her at the 2018 Heard Museum Guild Indian Fair and Market, where she will be showing her latest work in booth A-03.

Otherwise, we’ll see you at Bioneers 2018, at the Indigenous Forum, which will feature an incredible line up (TBD) of our heroes across Native North America sharing stories, new ideas, and innovative solutions to our toughest social and environmental problems.