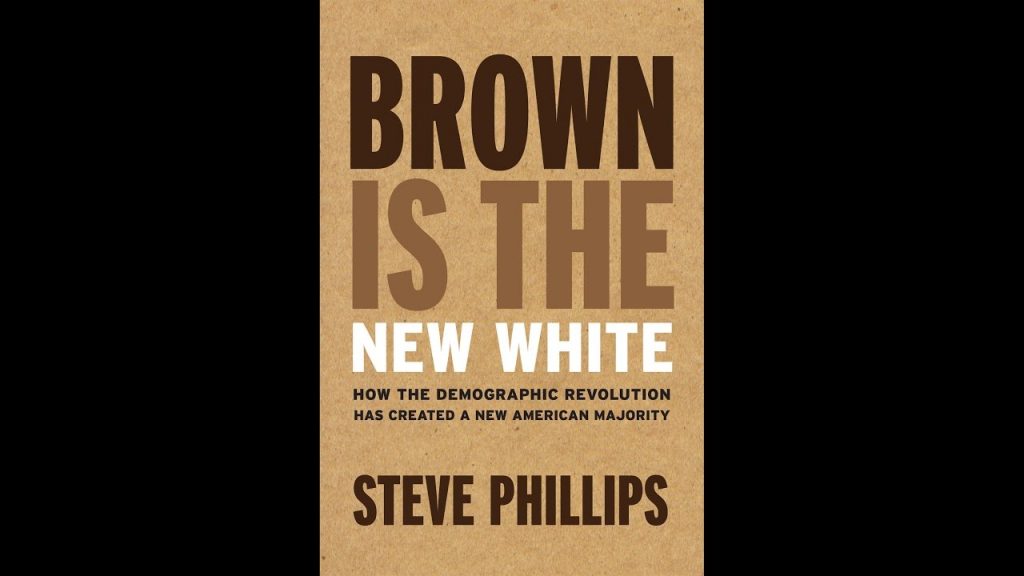 Steve Phillips—a national political leader, civil rights lawyer, and Senior Fellow at the Center for American Progress—published Brown Is the New White (The New Press) in February, 2016, just nine months prior to one of the most controversial presidential elections in United States history. In his book, Phillips describes how astronomical population growth among people of color within the U.S. has resulted in a demographic revolution—one that progressives can and should understand in order to establish political success. ‘Given the recent events in Charlottesville and the public rise of White Supremacy and Neo-Nazi viewpoints, Phillips’ political analysis is even more prescient and necessary. Brown Is the New White is perhaps more important now than ever before, as we reflect upon the path that led to a Trump presidency, and determine the best steps to ensure that recent history doesn’t repeat itself. The following excerpt is from the book’s introduction.

“They said this day would never come. They said our sights were set too high. They said this country was too divided, too disillusioned to ever come together around a common purpose. But on this January night, at this defining moment in history, you have done what the cynics said we couldn’t do.”

At 6:00 p.m. on April 4, 1968, Jesse Jackson was in the parking lot of the Lorraine Motel in Memphis, Tennessee, waiting with civil rights leader Andy Young and others to accompany Martin Luther King Jr. to a community meeting. At 6:05 p.m., Dr. King stepped out on the balcony of the motel and called down to saxophonist Ben Branch: “Ben, make sure you play ‘Precious Lord, Take My Hand’ in the meeting tonight. Play it real pretty.” Then Jackson and the group heard what sounded like a car backfiring and looked up to see Dr. King lying prostrate on the balcony in a pool of blood, his shoe dangling over the edge, the life draining from his body. Forty years later, on November 4, 2008, standing in Chicago’s Grant Park with tears streaming down his face, Jackson was again gazing upward at another young Black leader—Barack Hussein Obama, president-elect of the United States of America. In the forty years between King’s death and Obama’s election, America had undergone a profound transformation.

In the four decades since King’s death, the percentage of people of color in the American population has tripled, ushering in a new political era, scrambling the old electoral equations, and creating the conditions for a lasting New American Majority. In 1968, America was home to approximately 25 million people of color, or 12 percent of the U.S. population. By 2008, people of color numbered more than 104 million people, or 36 percent of the population. The civil rights movement pushed through two laws in the mid-1960s that paved the path for the demographic transformation of the American voting public. First, the Voting Rights Act of 1965—a signature accomplishment of civil rights activists such as King, Young, Jackson, and many others—eliminated obstacles to voting that had effectively disenfranchised most of the African American population since shortly after the end of the Civil War a hundred years earlier. Second, the Immigration and Nationality Act of 1965 removed race-based immigration barriers that had been in place since the founding of America. After the passage of those two laws, Blacks began to register and vote in much larger numbers, and millions of Asians and Latinos could finally legally enter the country. The color and composition of the country’s electorate would never be the same.

Most of the attention paid to the country’s changing demographics focuses on the trends showing that Whites will one day be a minority of America’s population. Many articles and analyses look to a distant date when the United States will become a “majority minority” nation. According to the most recent census projections, that year is expected to be 2044. There are two major problems with emphasizing the point when Whites will lose their majority status. First, it presumes that all White people are and will continue to be at odds with all people of color, which is untrue and unfounded. A meaningful minority of Whites have always sided with people of color throughout U.S. history. The second problem is that the focus on 2044 overlooks the equation that’s been hiding in plain sight, one that shows what happens when you add together the number of today’s people of color (the vast majority of whom are progressive) and progressive Whites. It’s this calculation that reveals that America has a progressive, multiracial majority right now that has the power to elect presidents and reshape American politics, policies, and priorities for decades to come. Not in 2044. Not ten years down the road. Today.

Watching the tears stream down Jesse Jackson’s face the night of Obama’s election moved me personally because Jackson’s presidential campaigns changed me. I was a delegate to Jackson’s 1984 and 1988 campaigns, and I took a year off from college to serve as the California student coordinator of his 1988 campaign. Through that baptism by political campaign, I learned some lasting truths about politics and social change. Before Barack Obama went to law school, before Spike Lee made his first movie, before Shonda Rhimes could even dream of writing television shows featuring actors of color, a forty-two-year-old Black civil rights leader shook up the political system by running for president of the United States of America. To get from Martin in 1968 to Barack in 2008, we needed Jesse in 1984 and 1988.

It was during the presidential elections of the 1980s that the seeds planted in the 1960s began to sprout and become visible in national politics. Jackson was fond of saying, “When the old minorities come together, they form a new majority.” The potential of this prophecy came into sharp focus in the 1988 campaign as Jackson won the presidential primaries in eleven states, led the race for the Democratic nomination near the halfway point, and finished as the Democratic runner-up with the most votes in history up to that time.

The key to Jackson’s success—and Obama’s electoral victories twenty years later—was the power of connecting the energy of people of color and progressive Whites seeking justice, equality, and social change to a political campaign for elected office. I’ll always remember how the Jackson for President campaign organized a march with Latino farmworkers in Delano, California, that culminated in Jesse kneeling and praying with Cesar Chavez, who was on a hunger strike at the time. I witnessed Asian Americans across the country thanking Jackson for being the only presidential candidate to call for justice for Vincent Chin, who was killed in a hate crime. I walked my first picket lines with members of the Rainbow Coalition standing in solidarity with the Watsonville cannery strikers and saw those formerly disempowered workers, who were mostly Latinas, become effective political organizers. And I learned about courage and compassion watching Jackson visit and comfort gay people suffering from AIDS, at a time when their plight was unrecognized and their humanity disrespected.

As a result of these types of efforts, millions of people of color and progressive Whites were inspired to register to vote and turn out at the polls in 1984. Two years later, large and enthusiastic voting by people of color helped Democrats win closely contested U.S. Senate races in the heavily Black and Latino Southern and Southwestern states of Georgia, Alabama, Florida, Maryland, Nevada, and North Carolina, capturing control of the Senate from the Republicans. Because the embryonic New American Majority had begun to flex its power in this fashion, when Ronald Reagan nominated radical right-wing judge Robert Bork to the U.S. Supreme Court in 1987, the Democrats were able to defeat the pick, forcing Reagan to put forward the more moderate Anthony Kennedy. Twenty-eight years later, in 2015, Kennedy provided the swing vote that established marriage equality as the law of the land.

Although I have many criticisms of Democratic politics over the past several years, I have loved having Barack Obama as my president. From providing health care to all Americans to working to bring undocumented immigrants into the American family to saving the U.S. economy from collapse and creating millions of jobs to reestablishing U.S. respectability and relationships with countries around the globe, to the incalculable positive impact on American children in allowing them to see a Black First Family in the White House for eight years, America and the world are better places because Barack Obama became president of the United States.

Yet despite meaningful and significant progress in the public policy realm, Democrats and progressives have failed to maximize the opportunity to build and secure a lasting multiracial political majority for positive social change by investing in, strengthening, and solidifying the communities that comprised the Obama coalition. As a result, we are at risk of losing the advantage the demographic revolution has presented us, and of losing the chance to move toward becoming a more just and equitable society.

Too often, people in power in the progressive movement in general and the Democratic Party in particular have not seen the New American Majority as a political force to advance a progressive agenda and expand the terms of debate. Instead, they tend to see people of color and progressive Whites as nuisances who need to be silenced for fear of alienating White swing voters. As one national progressive leader told me in 2010, “Whenever you mention racial issues to anyone in the West Wing, White House staffers curl up into the fetal position.” For example, the leaders of the Democratic Party in 2009 and 2010 defunded and dismantled the constituency desks targeting voters of color because they preferred a “color-blind” approach to voter outreach. In 2010, a top Obama advisor tried to pull the plug on a large march for jobs planned by a coalition of civil rights and labor groups for fear that it would alienate White swing voters. In 2014 an audit of Democratic Party spending confirmed that the lion’s share of the money—97 percent of more than $500 million in consulting contracts—was going to White consultants. What these leaders have failed to appreciate and understand is the essential interplay between the multiracial movement for social justice and the nation’s public policy process. There would have been no Voting Rights Act or Immigration and Nationality Act of 1965 without the marches, protests, bloodshed, and sacrifices that took place in the streets of Selma, Alabama, earlier that year. As Jesse Jackson observed, “The Voting Rights Act was written in blood before it was signed in ink.”

The problem is not limited to the White House. Most leaders of the Democratic Party still operate under the mistaken belief that Republicans took control of Congress because White swing voters switched their allegiances to the Republican Party, resulting in the crushing losses in the midterm elections of 2010 and 2014. The real problem in those races was lack of turnout of the Democratic base, but that analysis has not been done by the Party higher-ups, and hundreds of millions of dollars are being wasted in the futile pursuit of winning back White swing voters when a permanent progressive governing coalition could be established by investing those same millions in organizing the diverse communities that make up the New American Majority.

This excerpt has been reprinted with permission from Brown Is the New White by Steve Phillips, published by The New Press, 2016.