It Takes a Village to Survive When You’re a Superorganism 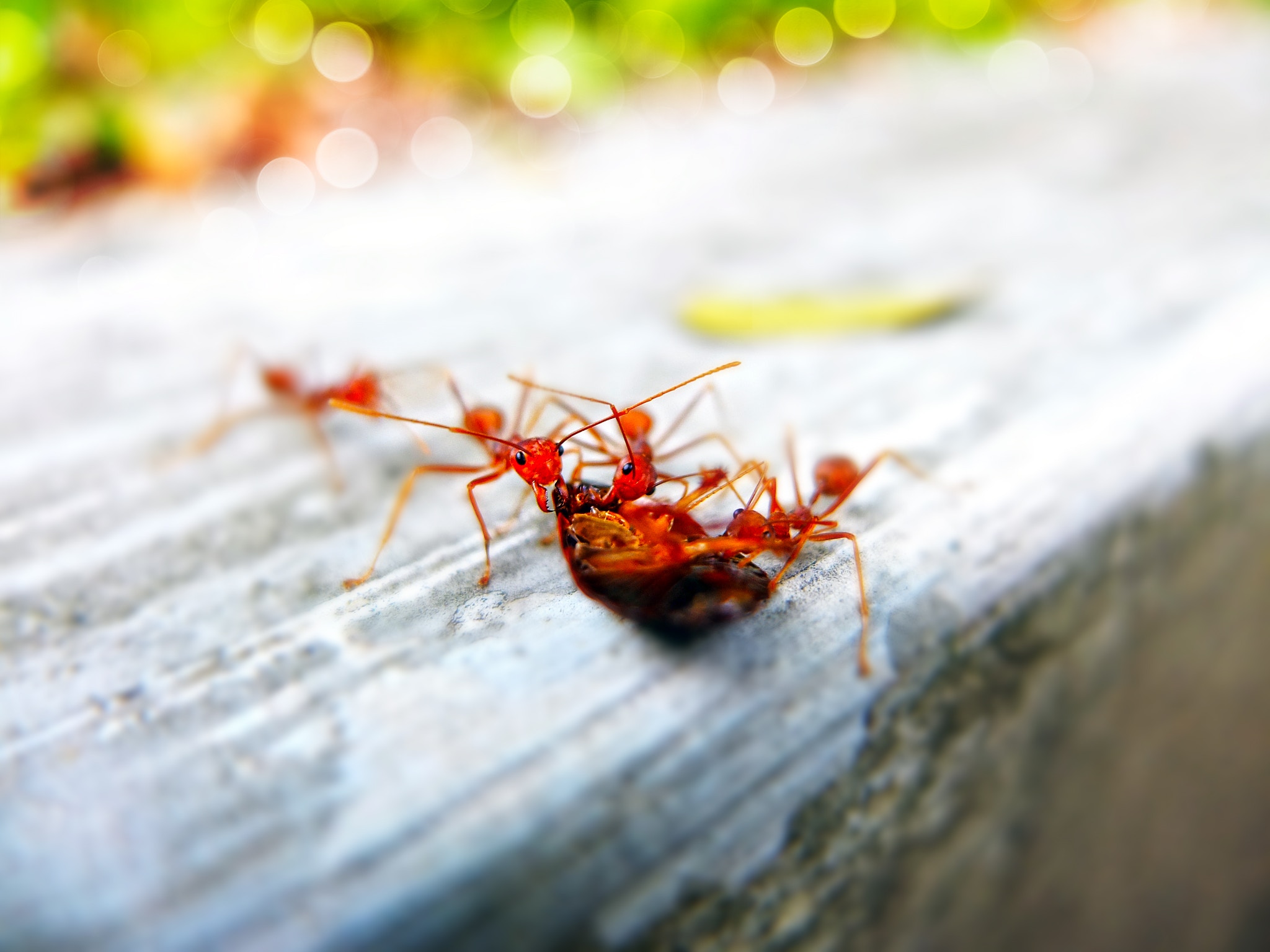 Ants, termites, honeybees, wasps—they may make our skin crawl, but they operate in ingenious, cooperative ways that humans have yet to be able to replicate. These are examples of superorganisms: societies that operate as collectives rather than as individuals with varied interests. Do humans have the ability to join forces and act as a superorganism? Dr. Tamsin Woolley-Barker thinks we do.

Woolley-Barker is an evolutionary biologist, primatologist, and biomimicry pioneer with an extensive background in leadership, innovation, and sustainability. Her book Teeming: How Superorganisms Work to Build Infinite Wealth in a Finite World (White Cloud Press, 2017) tells the story of organism networks, drawing parallels between their potential and the collaborative potential of humans. The following is an excerpt is from the book. 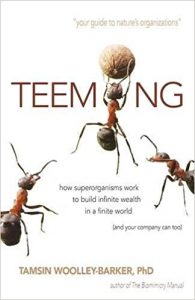 Like any good backyard biologist, I scrabbled around in the dirt a lot as a kid, watching ants. They seemed to speak in a chemical code—food’s over here! Hey, who moved our cheese? I scratched out their invisible trails and tricked them into following the wrong ones. Each one cruised in dopey circles, but together they always figured it out. They were good at their work, industrious and easy-going, running in endless, cheerful loops.

One day, my mom took me along to visit her friend, ten minutes east to the dry, planned-housing frontier—along the edge of the wild chaparral. I hotfooted it on their ill-conceived black slate patio, seeking a patch of shade where I could sooth my raw feet. I cooled them off with the hose, inspiring a teeming mass of furious red ants to stream from a crack in the pavers, straight up my leg. Like the peaceful little black ants back home, there was no stopping these hot-pepper red ones either. I shrieked and stamped, rubbing my legs in frenzied agony until my mom whisked me to safety and hosed me down. Wow! I was filled with respect for those angry red soldiers, and happy they didn’t live at my house.

I never saw those red ants again—San Diego’s native Southern fire ants are gone from our chaparral hills, wiped out by the mellow little black ants. How could that be? The black ants were descendants of banana boat stowaways from Argentina, disembarked many decades before. They were sisters, bearing the same chemical fingerprint, and warfare among themselves no longer interests them. Today, their vast supercolony sprawls across California, pushing out the natives as it goes. The black ants simply have more friends.

There are at least 14,000 species of ants around the world, maybe twice that many, and all live as superorganisms—amoeba-like societies whose members fundamentally depend on one other to survive. No one can do everything, but together, the colony is much greater than the sum of its parts. If it takes a village to survive, that’s a superorganism.

All these ants, tied together in a sack, would weigh about the same as all humankind. The global population of termites, which share a similar superorganism social structure, weighs twenty-seven times that much—there’s a cow’s worth of them for every one of us. Social insects like the ants, termites, honeybees, and wasps make up a quarter of the animal biomass in the Amazon Basin, and 80% of the total insect biomass in the world. This way of life is wildly successful, and ancient. The ants have lived this way for 150 million years, the termites a quarter of a billion. Even the great biologist EO Wilson takes “great pleasure to think that they stung or sprayed formic acid on many a dinosaur that carelessly trampled their nests.” The superorganism way of life persists, even as the world changes.

And believe it or not, there are societies even more successful and ubiquitous than these. Beneath the soil you walk on lies a half-billion year old pulsing nutrient superhighway of fungus—a dense fuzzy network of genetically distinct individuals on the hunt for matter to digest, minerals and water to absorb. If a meal is there, they will find it, and when they do, it will flow throughout the system, shuttling wherever it is needed most—because the fungi are fused into one. Each fungal cell gets more as a member of the network than it could on its own. Together, these fungal patches thrive—making up a quarter of all terrestrial biomass.

I’ve studied the evolution of social systems my whole life—everything from baboons and bonobos to orcas and insects—even slime molds and fungal networks. How do they cooperate, and why? What does working as a superorganism mean for individuality, personal freedom, and creativity? How does the fractal, ebb-and-flow math of collaboration and competition contribute to evolutionary change and complexity? And, how do these most ancient societies work to compound their value from one generation to the next? Superorganisms are everywhere, just like we are, and their footprint on the land isn’t small. And yet, we don’t see them choking on smog or stuck in traffic. The fungi aren’t counting carbon credits or worrying about the Pacific Garbage Patch, and termites and honeybees don’t have slums. These colonies have the same kind of metabolic requirements we do, yet they survive and thrive, sustainably—regeneratively—for hundreds of millions of years, through radical waves of change that turned other populations into fossils. Can we do the same?

After nearly thirty years of studying every kind of social structure, my conclusion is that we can. I know that, because it‘s been done before. The math is simple and universal. Botanical philosopher Michael Pollan says it well: “our relationship to the planet need not be zero-sum…as long as the sun still shines and people still can plan and plant, think and do, we can, if we bother to try, find ways to provide for ourselves without diminishing the world.” Other superorganisms have done it, and they can show us the way.

As an evolutionary biologist and primatologist, I’ve come to see humanity’s special niche as a social one: we’ve combined the political and problem-solving abilities of a chimpanzee with the collaborative teamwork of an ant society. Our ancestors were the first ant-like apes, and in many ways we have more in common with the termites and honeybees and even fungus than with our powerfully individualistic ape brethren. We are Pan superorganismus! I’m in good company with this line of thinking: eminently respectable evolutionary biologists like EO Wilson and Bernard Crespi agree.

As humans, everything we do requires collaboration—who among us makes all the clothes on their back? Like ants, we even expect strangers to coordinate with us, and reasonably politely as well. We drive on one side of the street, stop at the signs, stay in our lane (in some places better than others). We wait patiently for our latté, hold the door for others, say please and thank you, how do you do and excuse me. But if, for one second, you remember—as I always do—that we are 98% chimpanzee, you start to find these good manners extraordinary.

Yes, we’re apes—political and self-serving, affectionate and imaginative. But also we are responsible honeybees, filled with obligation and civic duty; industrious ants, moving earth and tending gardens; DIY paper wasps, driven by the urge to make; and densely networked fungi, pulsing through our digital webs supporting all kinds of teeming ecosystems together.

We are superorganisms, with all the ingredients we need to work together sustainably at scale. If we can embrace the ant and the ape at work in us, I think we can evolve the adaptive, resilient, regenerative global society we require, and design and realize the future we’d like to see.

Here is the simple difference between ancient superorganism abundance and our own increasing scarcity: they compound their wealth by building with virtually infinite things—sunlight and atmospheric carbon, diffuse specks of moisture and nutrients, trust and transparency, and the complexity, diversity, and interconnectedness of networks. There are always more of these things. These organizations are no pyramid schemes—they have virtually no hierarchy or top-down management, and no one tells anyone what to do. Information and resources flow among them, and teams grow from the edges out, in modular, self-managed units that form and dissolve around opportunity and risk when and where it occurs.

This approach maximally leverages diverse individual talents and experiences, and allows these organizations to reap the exponential rewards of collective intelligence and swarm creativity. Optimizing these things lets them accomplish the same kinds of complex tasks we require, with minimal processing power and maximal personal freedom. And these colonies work the same at any scale—no restructuring requires, they just fission or fuse on the fly.

This may seem like a radically new way to live, but I don’t think it is actually that hard. We are superorganisms too, after all, and this way of working feels natural to us. We already work this way in our families and communities—it’s the way we work best. We needn’t fight our nature to get there; just eliminate the obstacles that keep us from it. Superorganism logic is vital for our evolutionary success. These ancient societies offer a new and deeply biological way to do business—a new way to organize our entire global society as we do the hard work of adapting to a finite Earth. This is not a recipe for despair, scraping by, or doing less harm while delaying the inevitable death spiral, nor does it require us to become an army of faceless automaton clone ants or assimilate into the Borg. Quite the contrary—this is a recipe for unbounded optimism, abundance, individuality, personal freedom, and creativity.

These creatures make more each generation without poisoning their world through a set of surprisingly simple deep patterns. They gather diverse scraps of experience, talent, style, and resources, to yield powerful collective intelligence and swarm creativity. They share a compelling purpose, distributing leadership to find the sweet spot between order and chaos, top-down vision and bottom-up productivity. They protect collective value by distributing mechanisms for maintaining trust, and insisting on transparency and accountability. And, perhaps most importantly, they spill this value out into the larger ecosystems they inhabit, feeding the life that feeds them. They have to: it’s the only way to compound that value for the future.

Superorganism logic is proven, and feels right—our biology prevails where our governance fails. Collective value endures, and the simple principles needed to create and maintain it can change the world. They already have—many times in the history of Earth. They can do it again.

Superorganisms are all around us—nimble and adaptive, resilient and regenerative, dramatically outlasting the dinosaurs. The opportunities to borrow their collaborative logic are endless, with proven and enduring results. Our future is uncertain, but countless others have solved these problems before us—some with no brains at all. It can be done. With the right leverage points, any system can flip on a dime. Revolutions and tipping points surprise us. And we are not alone—we have millions of teeming mentors to learn from. Reach out and introduce yourself, because life “did not take over the globe by combat, but by networking.” Watch and learn from them. If we do, I’m certain that we—and all the life that we touch—can survive and thrive as they do, far into the future.

Excerpted from TEEMING: How Superorganisms Work to Build Infinite Wealth in a Finite World, © 2017, Tamsin Woolley-Barker. Published by White Cloud Press. This excerpt used with permission of the publisher.