The Legacy of Wangari Maathai 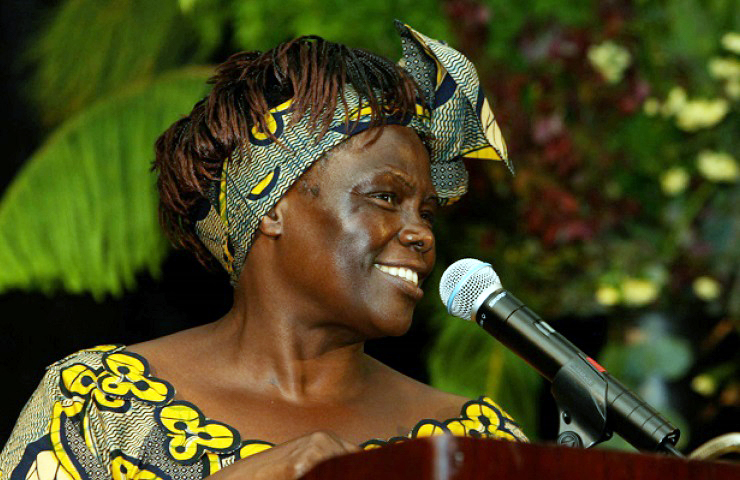 This article has been reposted with permission from The Goldman Environmental Prize.

Among the most prominent environmental activists of the last century is the late Professor Wangari Maathai, who founded the Green Belt Movement and inspired hundreds of thousands of people around the world to push for environmental progress. In commemoration of the 30th anniversary of her 1991 Goldman Prize win—and the 10th anniversary of her passing—we’re remembering Wangari’s rich background and innumerable contributions to both the environment and human rights.

Determined from the Beginning

Born in 1940 in Nyeri, Kenya, Wangari spent her childhood in the Kenyan countryside and her young adult life in the United States. She studied biology at Mount St. Scholastica College in Kansas, then obtained a master’s degree in biological sciences from the University of Pittsburgh. After returning to Kenya and pursuing her Ph.D. at the University of Nairobi, Wangari became the first woman in East Africa to receive a doctorate.

In the 1970s and ‘80s, along with teaching at the University of Nairobi and serving as a department chair, Wangari was an active member of the National Council of Women of Kenya, an organized group of rural Kenyan women fighting for women’s rights. Women came to the council in part to search for solutions to the environmental degradation they were witnessing in their villages; deforestation and desertification had caused many of the resources women relied on for food and clean water to dwindle.

Fueled by her knowledge of biology and innate passion for helping others, Wangari decided to take action.

Solving a Problem, Starting a Movement

Wangari had two goals in mind: to help restore environmental resources and give women the ability to support their families in a self-sufficient, sustainable way. To achieve her goals, she came up with a practical but impactful idea: to grow seedlings and plant trees. The trees would counteract the effects of deforestation, bind the soil, and improve rainwater sequestration, in addition to providing food and firewood—and, therefore, a livelihood for local families.

Wangari’s plan inspired the formation of the Green Belt Movement in 1977, an organization dedicated to environmental conservation and poverty reduction in Kenya. As the work of the movement evolved, Wangari realized that the environmental issues impoverished communities faced were a direct result of bigger problems, like governmental corruption and a history of disenfranchisement.

To help address the root causes of these concerns, the organization began leading what is now called Community Empowerment and Education seminars, meetings designed to educate community members about the environment and their civic rights.

As the Green Belt Movement grew and began to inspire tree-planting missions across the continent, Wangari expanded her focus. A champion of both social justice and the environment, Wangari’s activism sat at the intersection of several different but intertwined causes: environmental conservation, democracy, and human rights.

Wangari used grassroots activism to lead important protests throughout the decades that followed. In the late 1980s, she mobilized her community to oppose the construction of a skyscraper in Uhuru Park, Nairobi’s central public space. Though international investors eventually backed out of the project as a result of her opposition, the Kenyan government and press vilified both Wangari and the Green Belt Movement in the process.

Efforts to thwart Wangari’s influence and activism only intensified. In 1992, Wangari participated in a hunger strike in Uhuru Park to advocate for the release of political prisoners—and the police beat her unconscious. Then, in 1999 she led a protest against the privatization of Karura Forest in Nairobi, during which Green Belt Movement members were beaten by private guards. Despite facing ongoing repression and opposition from powerful actors in the region, Wangari never wavered in her work.

Wangari served on the boards of countless environmental organizations, spoke to members of the United Nations, and represented her community as a member of Kenya’s parliament for several years in the early 2000s. Due to her tireless work as both an environmental activist and humanitarian, Wangari received the Nobel Peace Prize in 2004.

After winning the prize, she was appointed Goodwill Ambassador for the Congo Basin Forest Ecosystem, wrote four books (The Green Belt Movement, Unbowed, The Challenge for Africa, and Replenishing the Earth), and continued speaking and advocating for greater representation within the global environmental movement.

Today, Wangari lives on through the countless lives she’s touched, and through the Green Belt Movement, which has continued its work in Kenya and globally through international tree-planting and climate change advocacy. Her daughter, Wanjira Mathai, continues her legacy as a prominent environmental advocate and member of the Goldman Prize Jury.

Every one of us—regardless of geography or background—can honor Wangari’s lifelong work and support her legacy by taking a few simple steps. In her famous “Rise up and walk” speech, Wangari said that we can start by planting 10 trees to offset the carbon dioxide we each exhale; practice the philosophy of reducing, reusing, and repairing; and look for opportunities to volunteer our time and services to our communities.

Visit the Wangari Maathai Institute for Peace and Environmental Studies and GreenBeltMovement.org to learn more.