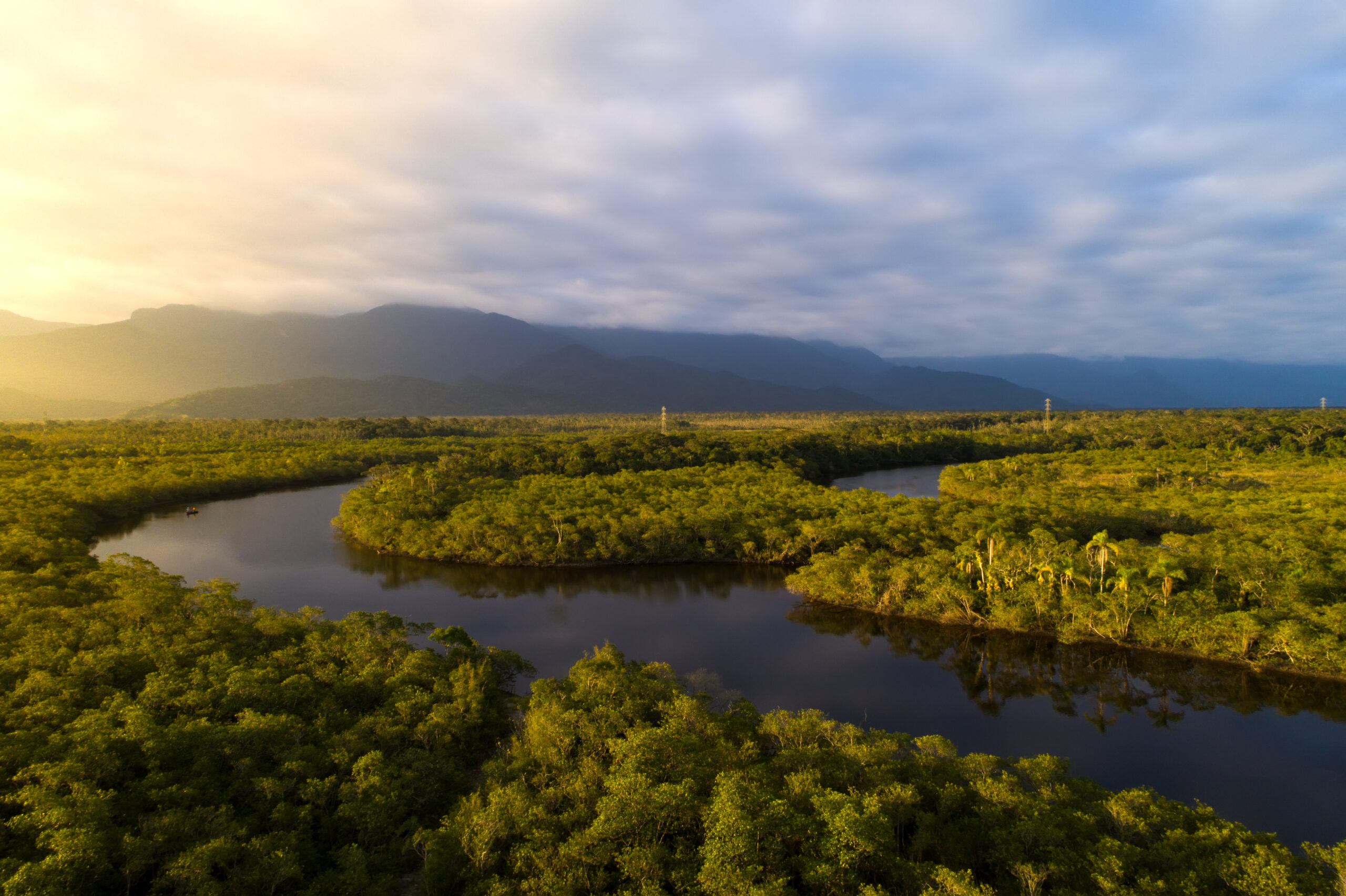 The ecological systems of the Amazon have long been threatened by damaging industries. Oil and mining operations have caused massive deforestation within the rich, planet-healing Amazonian ecosystems that many refer to as “the lungs of the world.” On the frontlines of efforts to protect the Amazon are more than 20 Indigenous communities, fighting for their home, land, and the wellbeing of the planet at large.

Atossa Soltani is the Director of Global Strategy for the Amazon Sacred Headwaters Initiative, an alliance of 30 Indigenous nations in Ecuador and Peru working to permanently protect 86 million acres of rainforests in one of the most biologically diverse ecosystems on Earth. She founded and is board president of Amazon Watch, of which she was the first executive director from 1996-2014. Atossa has been documenting and publicizing forest destruction and human rights abuses caused by extractive industries and large-scale energy projects throughout the Amazon for decades, and she’s led successful campaigns to force oil companies and international financial institutions to adopt stronger environmental and social standards.

The mass extinction crisis is one of the biggest challenges of our time. In the Amazon Basin, there are ever more catastrophic summer fires, bringing that immense forest perilously close to a tipping point of ecological unraveling. Already somewhere between 17 and 20% of the Amazon rainforest, which encompasses parts of 9 countries, has been destroyed or degraded. Once we get to a deforestation rate somewhere around 25%, we can expect to see an unraveling of entire ecological systems of the Amazon, so it’s imperative that we work hard and quickly to safeguard the future of the largest forest on the planet. Some call the Amazon “the lungs of the world,” but Indigenous peoples there have always said it’s the “heart of the planet.”

An average tree in the Amazon lifts up about a thousand liters of water a day into the atmosphere, so an area larger than the continental United States lifts up a river larger than the Amazon River, every day, into the sky. And that atmospheric river generates rain throughout South America and into the rest of the world. It’s one of the key engines of the global weather system, and it makes South America much lusher and greener than other continents in the same latitude.

Just to give you a scale of the size of the Amazon River itself: the flow at its mouth is 209,000 cubic meters per second, equal to that of the next six largest rivers of the world, combined! And then imagine a river 20% bigger than that, being lifted out of the forest every day and propelled into the atmosphere.

Some economists have estimated that 70% of South America’s GDP is dependent in one way or another on that rain, but fires each summer now are burning ever more millions of hectares of forest. One recent summer, Bolivia lost 40% of its forests. And to be clear, those are predominantly intentionally set, man-made fires set to expand cattle ranching and agriculture.

But there are, in some places, exciting initiatives bringing hope for change. I returned from Ecuador recently, and a really powerful, grassroots Indigenous peoples’ movement there was able to mobilize and force the government to listen to many of their demands to protect their territories.

It is especially crucial to save the most biodiverse parts of the region, and most of the plant species there haven’t yet been cataloged. There is so much we don’t know, and much of it could be lost forever if we don’t act now. Amazon Watch, the Pachamama Alliance, and many of our other colleagues have been working for the last 20-plus years in the Napo and Pastaza river basins, an area that has among the planet’s greatest bio and cultural diversity, as some 20 plus Indigenous nations live in this area, and they have been the best protectors of that biodiversity. In fact, globally, 80% of the world’s biodiversity is on Indigenous territories, and very often, the traditional stewardship of Indigenous cultures has produced the most exceptional results in protecting ecosystems.

These river basins begin high in the Ecuadorian Andes in the glaciers of sacred mountains. Many consider this area, which is larger than Oregon, the sacred headwaters of the Amazon. If business as usual is allowed to go on, most of this land will be converted to oil and mining operations. There are over 2,000 oil and mining concessions. In this region, oil is a huge driver of deforestation, whereas in other parts of the Amazon, such as in much of Brazil, it’s cattle ranching or agribusiness. Half of the oil extracted from the Ecuadorian Amazon ends up in refineries in California, so the protection of the Amazon is directly related to our energy consumption here in California.

The Sacred Headwaters Initiative that we’re working on is an unparalleled collaboration between Indigenous peoples and allied organizations. We’re working on trying to create a 74-million-acre bi-national Ecuador/Peru protected region, but an unusual one, because in this case, the region would be protected by Indigenous people with full rights to self-determination and stewardship, rather than just by governments. In fact, sometimes the land has to be protected from corrupt governments. Empowered Indigenous groups are far better protectors than just governments.

The climate contribution of preserving this forest would be enormous, somewhere around six billion tons of carbon that would not go into the atmosphere. But what do we need to do to protect this incredibly important forest? The first thing that the Indigenous folks have been demanding is that there be no further major resource extraction initiatives: no industrial-scale mining, oil drilling, agriculture, and no more dams and roads—nothing that is at odds with the fabric of life.

Secondly, these territories need to be governed based on a life-centric worldview. Indigenous inhabitants of this place have had that philosophical orientation for millennia, but for the last 20 years or so, they’ve been developing a vision and putting it on paper. They’ve been working on producing a community collective vision developed through many, many participatory activities seeking to build a consensus about a desirable future for their territories based on their cosmologies and values. They are talking about maintaining the tree cover and keeping their forest clean, abundant, and full of life so they can continue to live off the land and practice their traditional ways of being. They want to maintain their cultures while working on incorporating such positive modern additions as clean energy and scientific expertise in some areas. All of us might do well to emulate that sort of collective visioning process for our own communities.

The Sacred Headwaters Initiative is working to help the various local Indigenous people articulate and then combine their various “life plans” into an overarching bioregional plan for the protection of the whole area. There are many dimensions to it. One component is that we have also created a global commission of experts to help us find the best examples of ecosystem protection from around the world that can be drawn from to successfully protect this area.

This requires a radically different way of viewing land management. We have to shift the goals of the entire economic system to a holistic model that sees human prosperity as inseparable from regeneration and the flourishing of life. And this raises big challenges because Peru and Ecuador’s economies are largely based on income from resource extraction, and that’s true in most of the 17 most biodiverse countries in the world, mostly in the tropics. Getting those governments to keep fossil fuels in the ground and to stop mining in protected regions is a top global priority both for biodiversity conservation and climate stabilization, but it’s a very tough sell.

We are working globally on ideas around how to find funding to pay these governments of mega-biodiverse countries to transition their economies and get beyond fossil fuels. It was tried before in Ecuador before the Paris Climate Accord, and it failed, but we have to get creative and keep trying because these countries will need strong incentives to make those difficult transitions. And eventually, we need a deeper cure: We have to get away from the current economic model that’s at war with nature, that’s seeking to consume nature to convert it into cash.

My personal evolution of working on these issues came from the realization at a young age of the validity of the Gaia Hypothesis. I firmly believe that the Earth is a living system, a super-organism that seeks to perpetuate conditions conducive to life, and that we, the humans on this Earth, have to align ourselves with this larger super-organism and be productive cells in the body of that living Earth. I think that seeing the Earth as a living system of which we are productive members can bring a shift in identity and perspective that will help us find solutions.

Note: This is an edited/excerpted version of a presentation given at the Bioneers Conference.