Trump, Paris, and the Citizen Leader 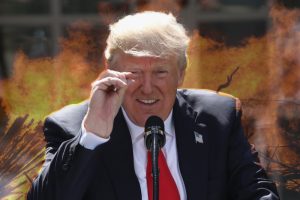 Yesterday’s news on the United States withdrawing from the historic Paris Climate Agreement reinforces what many have known for a while now– that Donald Trump ran on a dangerous, short-sighted, and oppressive campaign. It is no surprise that everything he and his “swamp-filled” administration have done since assuming the Presidency is take whatever progress has been made and fought for over the better part of the last 60 years and sell it to the highest billionaire willing to profit from it.

As a young adult who has grown up with the internet as the backdrop for my world-expanding experience at home, I’ve had the privilege of access to content and information previously inaccessible to so many. With that access comes the reality of being exposed to the best and worst of society. Being educated and having enough common sense as a millennial to realize that we only have one planet to live on for the foreseeable future, I have enough common sense to know that we are going to suffer the consequences of climate change in my lifetime and in the lifetimes of the children I one day hope to have.

The retraction from the Paris Climate Agreement triggers and angers me. However, I am not alone in that anger. That anger is felt to this same degree by everyday people who also feel small in comparison to the federal government. Some of these same angry people in turn have channelled their frustration and taken more leadership than even that same government on some of the most critical issues of our time, in this case Climate Change.

A quote from Margaret Mead comes to mind when evoking the newly awakened reality of the nation: “Never doubt that a small group of thoughtful, committed citizens can change the world; indeed, it’s the only thing that ever has.”

As a young person who will eventually need to deal with the adverse effects of a warming planet and all the climate issues that ensue because of it, I see my peers shoulder to shoulder, genuinely pissed off. Yet that anger has not been confined to an empty void, limited to 140-characters. It has been the catalyst to promote an outpouring of love and resilience that has become the source for sustainable energy used to resist and fight against these destructive policy decisions.

It has even shown up in top business leaders around the country which, as a young adult who has to deal with those choices, provides a level of relief that even some of the corporations which could benefit from the withdrawal have chosen to go against the decision.

Still it can be easy to fall into a sense of powerlessness, but if I have taken anything away as an activist, warrior scholar, defender of Mother Earth, and fighter for social justice reading Mead’s quote, it is that the response by Pittsburgh’s Mayor Bill Peduto, and other city and state leaders across the nation,  to the withdrawal is yet another step towards a much larger fight that will need our collective energy, time, and above all, belief. For after all, it is our planet too.