We Are Not A Mascot: A Big Win in the Fight Against Anti-Native Racism 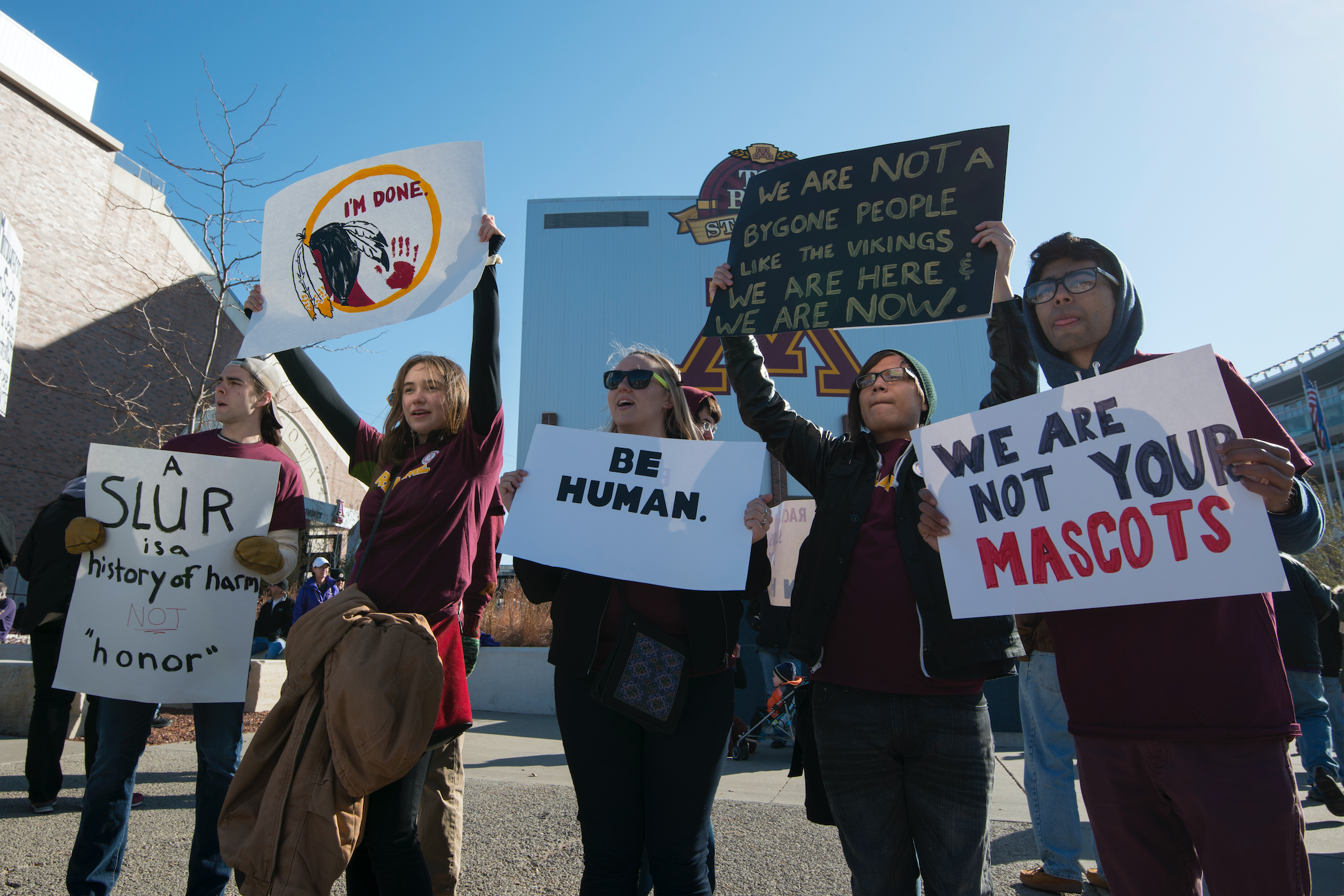 Suzan Shown Harjo (Cheyenne & Hodulgee Muscogee) is a leading advocate for American Indian rights. As a writer, lecturer and policy advocate, she has raised awareness of issues that affect Indigenous communities — including racist mascots.

Suzan and other activists have long been working against sports teams and universities whose mascots depict derogatory imagery toward Indigenous Peoples. Abandoning these mascots is a step toward abandoning the harmful caricatures and stereotypes they portray, helping to end the marginalization of Indigenous communities and to promote a more equitable culture.

This “no-mascot movement” achieved a big win earlier this month, when the Washington NFL team decided to change its name and mascot. In this Facebook post, reposted with permission, Suzan celebrates the decision and reflects on the long road to get here.

Poor Daniel Snyder, owner of the Washington R*dsk*ns, has nothing left to do but this slow strip tease. He had to satisfy: First, his FedEx and other managerial and promotion partners. Second his merch partners. Third, the franchise’s 40% owners.

This day is brought about by Native Peoples and our BIPOC partners moving the country toward racial and social justice. And by the longevity and persistence of our no-mascot movement, which began in earnest for me when Clyde Warrior (great Ponca fancy dancer and Oklahoma youth organizer) visited my senior high school class in OKC in 1962, and informed and energized us about “Little Red” at the University of Oklahoma and the “worst one of all, right there in the nation’s Capitol,” R*dsk*ns. Clyde lived to co-found the National Indian Youth Council (1963-4) and to forge coalitions with other students of color and women at OU, but he didn’t live long enough to see OU retire “Little Red,” which became the first “Indian” reference to be eliminated (in 1970) from the entire landscape of American sports (Stanford 1972, Dartmouth 1974, and Syracuse 1979).

This day of the retirement of the R*dsk*ns slur and stereotypical logo belongs to all those Native families (including mine and that of Amanda Blackhorse, my sister target number one), who bore the brunt of and carry the scars from the epithets, beatings, death threats and other emotional and physical brutalities resulting from all the “Native” sports names and images that cause harm and injury to actual Native Peoples (both persons and nations). It does not belong to a change of heart by the team or to those who are bandwagoning and in line to cash in on our hard-fought and hard-won success. We’ve ended more than two-thirds of these obscenities and now have only 900 or so left to go, but the fall of this king of the mountain of trash will help others to give up their ghosts of racism even faster, so, Aho, Mr. Snyder and thank you, Mvto, Mr. Fred Smith. Now, back to work for the rest of the fewer than 900 left to go.

Great good thanks to those courageous people who said yes when I asked them to be co-plaintiffs in the landmark lawsuit, Harjo et al v. Pro Football, Inc. We filed on September 10, 1992, and won the unprecedented decision to cancel the R*dsk*ns’ trademarks in a unanimous three-judge, 145-page ruling by the Trademark Trial and Appeal Board on April 2, 1999. A federal district court judge reversed the decision of the three trademark expert judges, and the appellate court upheld her ruling against us on laches (a unique interpretation of the defense that we plaintiffs each waited too long after turning 18 to file our suit). The Appeals Court stated that they were ruling solely on laches (and not on the merits), and the Supreme Court did not grant our request for review, which ended our case at the end of 2009, after 17 years of litigation.

In 2005, while waiting for the trial judge to answer the appeals court question if laches ran against Mateo Romero, too (he had been a toddler when the franchise obtained its first trademark in 1967 — it took the trail judge three years before finally answering), I identified, interviewed and recruited young Native people between 18 and 24, who would not have the laches issue identified by the trail judge. They filed the identical suit to ours, Blackhorse et al v. Pro Football, Inc.

Thank you to those who agreed to be part of that case, which they filed in 2006, but the Patent & Trademark Office said their case would be held in abeyance until the conclusion of our case. The second case became active in 2010, they won a second cancellation decision from two of three TTAB judges, won the first federal district court decision (in a different district) on summary judgment in 2014, and the Rs appealed it to the 4th Circuit Court of Appeals, where it was rendered moot in 2017, when the cause of action was declared unconstitutional in a totally separate case. The Supreme Court ruling also rendered moot Harjo et al Letters of Protest, which were filed with and accepted by the PTO in 2010 and put on hold until the end of the Blackhorse case. The Protests were not cancellation cases; rather, they opposed the requests for new trademarks for the same vile names and stereotypical logo that had stacked up over the course of the first case.

Great appreciation to all who represented and assisted and guided and supported us. While we in the two cases and protests were in litigation for a combined quarter-century, it must have felt longer for the Washington NFL franchise, which has not returned to a Super Bowl since we filed suit in 1992, nearly 30 years ago. Now that’s karma! I hope the players, whose spirit is unleashed by their owner, will be able to play better, now that this burden of racism has been lifted from their uniforms, helmets and backs.

I’ve gone into some detail about our cases and about my work, because I’ve noticed in many reports over the past week that a number of reporters, editors and fact-checkers must have been in a big hurry to have gotten so many simple, factual matters so wrong. Thank you to all who called Friday and Monday, to touch base and for interviews. I decided to reserve interviews and long backgrounder talks with Native media, The New York Times, with Courtland Milloy of the Washington Post, Coach Butch McAdams and others with WOL, in honor of the great Ms. Cathy Hughes, who long ago banned the R-word from her radio station. Aho and Mvto to all who have joined forces this past week in our final push and for all those who were with us in spirit and by the quick emails, calls, PMs and FB messages.

It’s been a long road for me and us since 1962 to 2020, with lots of decades and influences and hard work and dead mascots in between.

Suzan Shown Harjo (Cheyenne & Hodulgee Muscogee) is Tsistsistas, a Cheyenne citizen of the Cheyenne & Arapaho Tribes, and Hodulgee Mvskoke of the Nuyaka Ceremonial Ground. A recipient of the Presidential Medal of Freedom, the United States highest civilian honor (2014), she is a writer, curator and policy advocate, who has helped Native Peoples protect sacred places and recover more than one million acres of land. She has been an award-winning Columnist for Indian Country Today in all its incarnations. President of The Morning Star Institute, she was Lead Plaintiff and organizer, Harjo et al v. Pro Football, Inc. (1992-2009), and organizer and expert witness of the identical lawsuit brought by Native young people, Blackhorse et al v. Pro Football, Inc. (filed 2006, active 2020-2017). A Founder (1967-1989) and Founding Trustee (1990-1996) of the National Museum of the American Indian, Smithsonian Institution, she is Guest Curator and Editor of its exhibition and book of the same title, “Nation to Nation: Treaties Between the United States and American Indian Nations” (NMAI Museum on the Mall, 2014-2021; Smithsonian/NMAI Press, 2014), and was Host of NMAI’s first three seasons of the Native Writers Series and Director of the NMAI/ANA Native Language Repository Project. A Carter-Mondale Administration political appointee, she was Legislative Liaison for both the Native American Rights Fund and the Fried, Frank, Harris, Shriver, Kampelman law firm; and was Executive Director of the National Congress of American Indians (1984-1989), which she still serves as Co-Chair of its Human, Religious & Cultural Concerns Subcommittee, and was awarded NCAI’s 2015 Native Leadership Award. She received the Institute of American Indian Arts’ 2011 Honorary Doctorate of Humanities and the first Montgomery Fellowship given to a Native woman (1992); was awarded unprecedented back-to-back residencies as the 2004 Poetry Fellow and Summer Scholar of the School of Advanced Research in Santa Fe; was the first Vine Deloria, Jr. Indigenous Scholar and wrote the new introduction to his reprinted book, “We Talk, You Listen” (Bison, University of Nebraska, 2007); and was elected with the Class of 2020 to the American Academy of Arts and Sciences.