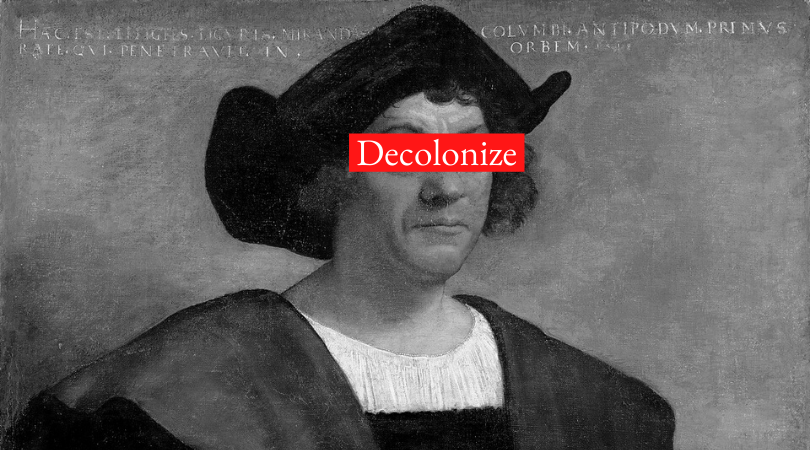 Within recent years, decolonization has grown to become a buzzword in community organizing work. However, the political power that it holds can easily be robbed of its importance if we are not intentional with how we use it. Fostering informed intentional use of the concept first requires that we understand colonialism and history.

So, what is decolonization? Following an interview with Alexis Bunten (Aleut/Yup’ik), co-director of Bioneers’ Indigeneity program, we explore the Indigenous history, settler-colonialism and the meaning of decolonization.

Colonialism is a structure through which capitalist nations steal land, occupy it with foreign settlers, and establish dominant political control to sanction the exploitation of Indigenous land and people. The misconception that colonialism is an event rather than a structure muddles its true nature and inhibits people’s development of a useful understanding of colonialism. Colonialism developed as a way for capitalism to expand its reach to new territories that could fuel the production of wealth for European nations. Capitalism’s global spread through colonialism is a result of its need to pursue infinite profit through finite resources. “The capitalist economy has to have continual growth to stay in place, and that’s what colonialism is about. It’s about this constant expansion, more resources to extract, more people to exploit, and it never ends and destroys the planet” says Alexis in talking about the intimate relationship between capitalism and colonialism.

As political and social norms evolve in different regions of the world, so does colonialism. Beginning in the late 19th century, a shift in federal Indian policy resulted in the investment in creating boarding schools that would serve to enact the cultural genocide of Indigenous people. In 1879, the federal government opened the Carlisle Indian Industrial School in Pennsylvania under the superintendent’s motto of “Kill the Indian, Save the Man,” echoing the belief that Native people can be Americanized. Prior to the federal turn toward “civilizing” Indigenous people, the attitude toward tribal nations conceived of them as an impediment to American progress who needed to be killed en masse to pave way for the wealth of the new settler colonies. When Chief Justice John Marshall litigated a series of Supreme Court cases known today as “The Marshall Trilogy,” the federal government’s policy on Native peoples shifted as the ruling declared that the authority of tribes to govern themselves predated the creation of the United States and the American government had a responsibility to provide essential services and resources to tribal nations. The Marshall Trilogy marked the beginning of neocolonialism as federal Indian policy shifted from outright slaughter to a metaphorical “killing” of Indigenous culture and personhood. Despite the turn toward the systematic destruction of traditions, values, language and other cultural elements, the impact remained the same, as cultural genocide is still recognized as genocide.  No longer were the wars against Indigenous people being waged with guns; now the wars were being waged with treaties and negotiations.

Indigenous people became intimately familiar with the pen’s might over the sword as tribes were displaced from their homelands and starved into negotiations. Alexis describes her people’s experience with the Pebble Mine project in Bristol Bay, Alaska:  “In my region, all the way across the world in Bristol Bay, Alaska – did they kill people or burn them out of their villages? No. You can’t get away with that in the modern day USA. What they did do is lure people into community meetings where they were trying to convince them it was a good thing, and brainwash them by offering people really expensive steak dinners in a place where a box of cereal costs $12.”

When internalized by the Indigenous population, colonialism can be a powerful means of bribery through which to sow discord internally among communities. As much as colonialism is an act of physical violence that transforms material conditions, it is also psychologically and spiritually violent. By separating Indigenous people from basic necessities, stealing their resources and privatizing them under capitalist growth, settlers gain leverage through which they can coerce Indigenous leaders to comply with colonial interests.

Without a comprehensive understanding of colonialism and the ways in which Indigenous leaders can uphold it, allies often reinforce the romantic notion that uplifting Indigenous wisdom and spirituality equates to action. As Alexis pointed out in our interview: “That is not to say we should not romanticize nor stereotype Indigenous Peoples. We’re so diverse and there were plenty of tribes in North America that took slaves.” Among the 574 federally recognized tribal nations that exist (and another 200+ that aren’t federally recognized), political leadership among tribes are as diverse as congressional U.S. leadership. Tribes like the MHA (Mandan-Hidatsa-Arikara) nation have grown to become one of the most oil rich nations in the country. In 2011, tribal chairman Tex Hall adopted the mantra “Sovereignty by the barrel” expressing the belief that wealth accrued from fossil fuels can fuel tribal sovereignty and self-determination. As Alexis puts it, “You internalize the logic and ideologies of capitalism in the dominant society, which is things like the life narrative in America: You’re born, you go to school, you get married, you get a job, you buy a house, you have children. All of that is tied into market capital and the acquisition of goods and consumerism.”

Within the past few years, “decolonization” grew in rampant popularity among numerous social circles and without much care. Oblivious to the various uses of the word, allies risk robbing the concept of its political power when they lack a straightforward transparency with how they’re using “decolonization”. From “decolonizing your diet” to the literal taking of land, it is hard to pin down and define a single definition of the concept. The majority of the time it’s used, rarely does it ever center land.

A landmark text within the debate is Eve Tuck’s and K. Wayne Yang’s , “Decolonization Is Not A Metaphor”. In it, the authors argue that any use of the term that does not directly involve the return of land to Indigenous people is not decolonization. Within Native communities, tribal internationalism plays a key role in the development of a decolonial vision. The 2016 protests against the Dakota Access Pipeline (DAPL) on the Standing Rock Indian Reservation garnered international attention and welcomed allies from around the globe. The international reach of the protests followed a long history of the tribe’s global alliance with other Indigenous nations.

Regardless of one’s opinion on the matter, the authors bring up a crucial aspect of the debate: action.

One way Alexis recommends taking action is beginning by first learning whose land you’re on. With over 300 treaties signed by the United States with tribal nations, not a single one remains unbroken. Learning the treaty history and how it contextualizes your life on the land you live is a step toward challenging the legacy of colonialism.

In a larger economic vision, Alexis speaks of how “the nation state controls the means of production and the distribution of it” and how “It should be out of the hands of the nation state and put in the hands of people.” Transforming our relationship to our resources and economy is a crucial aspect of decolonization. As we’ve seen in recent times, the United States colonial economic regime works to outsource production to Indigenous communities overseas where they can pay workers less in hazardous work conditions. Alexis’ vision of a decolonized economy seeks to end colonial exploitation in other countries that produce goods for the United States.