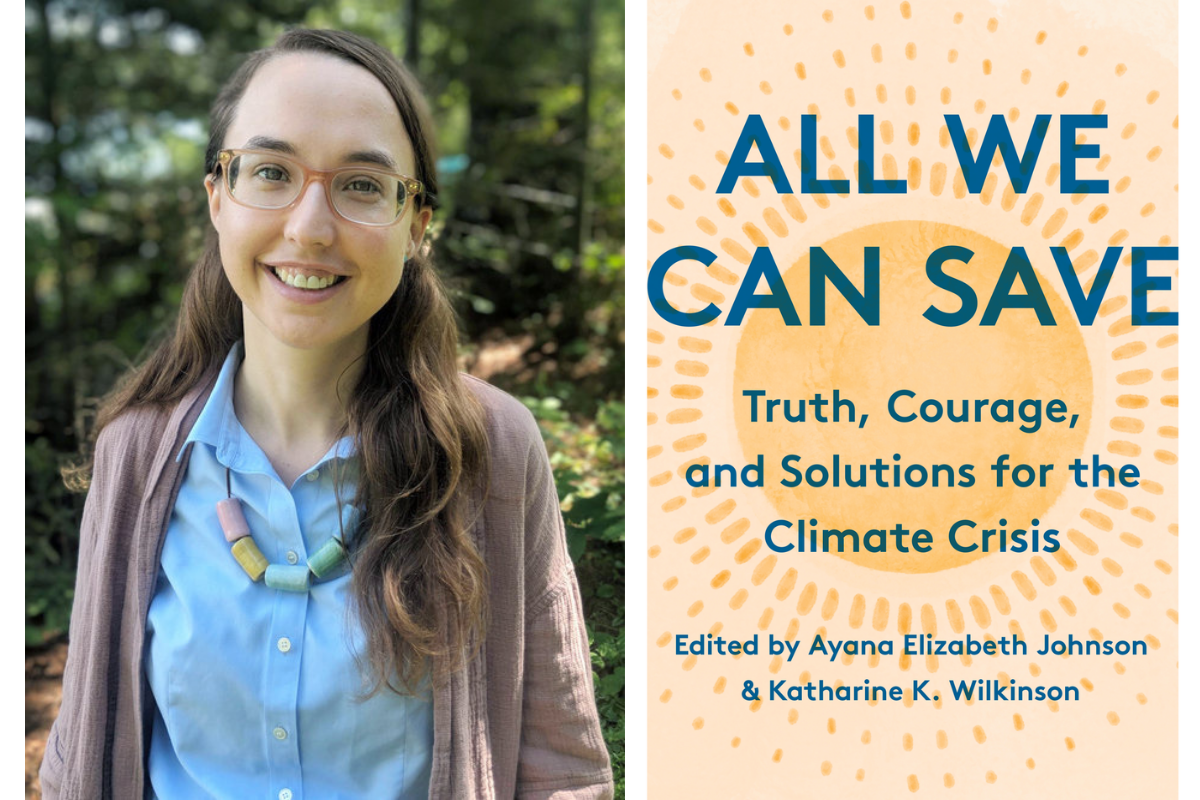 Dr. Leah Stokes is an Assistant Professor of Political Science and an affiliated faculty member at the Bren School for Environmental Science and Management at UC-Santa Barbara, where she works at the intersection of climate and energy policy. Dr. Stokes is a contributor to the recently published essay collection, All We Can Save: Truth, Courage, and Solutions for the Climate Crisis, which features dozens of prominent and impactful women leaders who are transforming the climate movement. Dr. Stokes has also teamed up with the other of the book’s two co-editors, Katherine Wilkinson, to launch a new podcast called A Matter of Degrees.

Teo Grossman, Bioneers Senior Director of Programs and Research, spoke with Leah Stokes about gender disparity in the climate movement, the role of corporate fraud in perpetuating the myth of individual responsibility around climate change and the importance of detailed understanding of energy policy.

TEO: We’re talking today at the recommendation of Ayana Johnson, the co-editor of the newly released book, All We Can Save, in which you have an essay. Would you describe the book, the project, and how you got involved?

All We Can Save is an effort to diversify climate media and reflect the diversity that exists in the climate movement. It’s a collection of roughly 60 women who are poets, essayists, academics, activists, writers, artists, all kinds of people from all walks of life. It’s a really beautiful book, including poetry and art.

Ayana Johnson and Katherine Wilkinson, who co-edited the book, have also launched a nonprofit called All We Can Save, which, among other activities, will give out an award in honor of Eunice Foote, the pioneering climate scientist, which is going to go to women climate leaders to help catalyze their careers. It’s really a whole effort to try to diversify the voices that we hear.

I have actually launched a new podcast, A Matter of Degrees, hosted with Katherine Wilkinson, which also reflects that effort. Sixty percent of our guests are women, and it’s a documentary-style podcast, so there’s a lot of guests. Forty percent of guests are people of color. When we have women telling the climate story, they tell a much more diverse, solutions-oriented and truthful climate story than the kinds of narratives that we often see in the media.

TEO: Your research focus is energy policy. All We Can Save explores on the increasingly central role that women are playing across the climate movement as well as the need for feminine and feminist approaches to leadership within the movement. I’m curious how you see this playing out in your specific niche in the energy policy world.

LEAH: The energy policy space is extremely male dominated. It’s very technical. There are a lot of economists, lawyers, and engineers, and these are not the most gender diverse disciplines or jobs. I often find myself to be one of a few or sometimes the only woman working on these topics or showing up, particularly in the electric utility industry. When you look at the CEOs who run these very polluting, monopoly corporations that we all have to buy our electricity from, they’re overwhelmingly older, white men who take home massive salaries and don’t really act in the public interest.

There is a need to diversify the energy space because our energy system as it exists now is really toxic. It kills black, brown, and indigenous people by exporting pollution into their backyards. There has not been enough critical thinking around those issues.

TEO: In the essay that you contributed to All We Can Save, you describe your journey into energy activism and then later into research and academia. As I was reading it, I was really struck by your focus on identifying levers of change that can really make an impact.  One of the ways that you illuminate this is by identifying the choices that are actually not available to be made at the personal level. You can’t choose to take a train when the train isn’t there; you can’t choose to purchase renewable energy when your monopoly utility is not offering that option; you can’t sell rooftop solar energy back to the grid unless net metering is legal in your location.

TEO: I think in some ways this is one of the biggest hurdles that the environmental movement has to jump right now. This movement has been historically pigeonholed by some of these same big companies into making this all about individual responsibility. If you look at the history of plastic pollution, that’s the exact story, big companies literally creating the idea of litter.

TEO: How does this message resonate with audiences and students when you describe it, because I think a lot of people who care are conditioned to think, “What can I really do?”

LEAH: Yes. Corporations like BP have popularized the idea of a carbon footprint. They made calculators and got us all to think about this as our own problem rather than asking, “How big is your carbon footprint, BP, and what’s your plan to offset it?” Where’s the answer to that question?

The media has told a very consistent story, which is that climate action is about sacrifice. If you look at the CNN Climate Town Hall earlier this year, which was seven hours of TV mainstream reporting on climate change (amazing and unprecedented), they asked almost every single candidate about hamburgers. Okay? First of all, agricultural emissions are a small slice of this problem. I’m not saying we shouldn’t deal with agriculture, but that’s not even empirically a big slice of the problem. Secondly, that is such a focus on sacrifice and individual behavior change, and it is not the crux of the climate problem.

If we allow other people to define the climate crisis in this way, we will not be able to build the big tent that is necessary to push through transformative climate action, because shaming people and making them feel guilty is not a great strategy to create an inclusive, giant social movement.

Focusing on polluters, on the lying that they have done, the billions of dollars that they spent on climate denial, is a far more empowering message for people. It helps bring them into the movement, and it helps them focus on the really big levers, which are things like our energy system.

TEO: I was in a national meeting on climate education where attendees were questioning whether they had collectively done a good enough job teaching climate change. Someone pointed out that we have all been assuming that there is a level playing field to teach on. In reality, climate education has been blowing into the wind, and it’s been a really stiff corporate-funded wind, to the tune of hundreds of billions of dollars. There’s a reason why climate educators feel like they’re not doing a good enough job and it’s not because they’re not working hard enough.

LEAH: We don’t even know how much money fossil fuel companies and electric utilities have spent on climate denial, but it’s enormous. It’s billions of dollars. And the climate movement does not have billions of dollars to spend on our own response PR campaign. We just have people power. We need to be telling the stories about the way that they have been profiting off of climate denial and delay, and imperiling all of our present and future lives, and poisoning Black and Indigenous bodies along the way.

We have to expose the dark money campaigns and the unfairness, just like Naomi Oreskes and Erik Conway have done so beautifully, not just for climate denial but also for the tobacco industry, how they lied about the link between cigarettes and cancer, and eventually they were held legally accountable. That is the same message that we need to be talking about for the climate issue, because it’s true. Fossil fuel companies and electric utilities have lied about climate change, and they have profited off of that denial.

TEO: Your own book, Short Circuiting Policy, was published by Oxford Press this April. It could be because I’m just a super nerd, but I’ve been hearing a lot about the book, which is an academic volume focusing on in-depth analysis of a particular corner of energy policy.

TEO: I find it fascinating, but then that’s the world I come out of. But I don’t think it’s just me. It feels like the book has actually broken out of that academic realm in a lot of ways.

LEAH: The book has sold very well for an academic book, which means I’ve made zero dollars, but people have read it.

TEO: What do you ascribe that to? I don’t know the history of academic policy books, but I have to assume that there aren’t that many that have “broken out,” so to speak.

LEAH: I labored away on this book for seven years by myself. I did a lot of field work, interviewed more than 100 people. In the last couple of years as the climate crisis was getting worse and I saw it in my own community, I just felt useless, “Why am I doing this? No one will ever read this.” We have this urgent crisis and I’m writing this detailed book that will be read by like five people. But it didn’t turn out that way, which is really exciting. It turns out it’s been read by thousands of people, including policymakers, their staff, journalists, students of course, and other academics. We did a book club and hundreds of people came. It’s had a really broad reach. It’s been sold out of its printing many times, which doesn’t say much because it’s an academic book, but it’s been really outperforming any and all expectations.

I think it’s because I tried to write it in a way that was accessible. I’ve gotten a lot of feedback that people feel that it worked, that I communicated the urgency and the stakes, but that it was also understandable to people.

Also, climate change more broadly is having a breakthrough moment right now, and people are starting to understand that their electricity system needs to be working for them, that we have to put pressure on our politicians to enact something like a 100% clean electricity standard by 2035.

I feel like the moment is ripe. I’m riding the coattails of people like Greta Thunberg and Alexandria Ocasio-Cortez. They have really opened up space for so many other women. It’s been really exciting to see these ideas resonating with people.