Youth vs. Apocalypse: An Allied Approach to Climate Justice Leadership 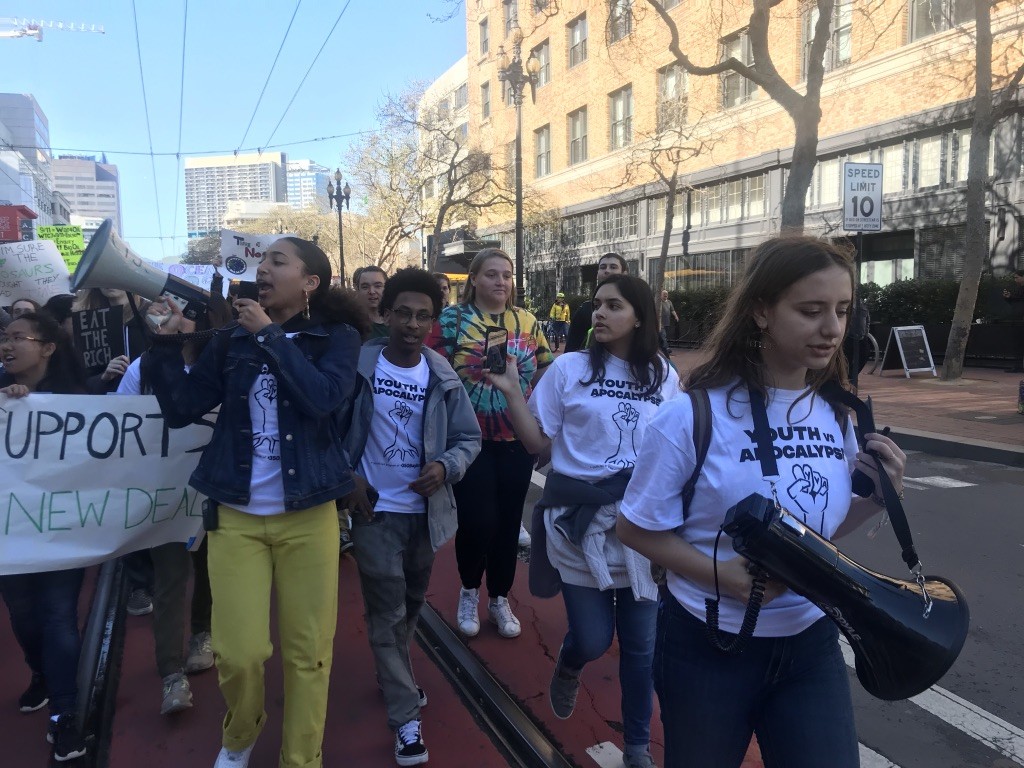 Isha Clarke of Youth vs. Apocalypse discusses how their group is redesigning the climate justice movement to centralize justice and provide a platform for youth of color and indigenous youth. YvA is doing deep work to build local, national and global coalitions with other youth movements and adult allies. Maya Carlson, Manager of the Bioneers Youth Leadership Program, caught up with Isha in between her school work and activism to find out more.

See Isha Clarke speak about her work at the 2019 Bioneers Conference.

MAYA CARLSON: Tell us a little bit about yourself. What identities are you holding right now?

ISHA CLARKE: I am a doer of many things at once. I’m a student. I’m a dancer. I’m an artist. I’m an activist. I’m a human being. I’m a sister, a daughter, a cousin. All that. I feel that I have a voice and a message that’s important, and I don’t think that’s unique to me. I understand things, so I feel it’s my responsibility to express that and to spread the knowledge. I think I’m also a leader.

MAYA: How did you get involved in climate justice organizing?

ISHA: I first got into climate justice in 2017 when I was invited to an action targeting Phil Tagami, a very prominent developer in Oakland. He was trying to build a coal terminal through West Oakland and was suing the city to do so.

The action was going to his office dressed as elves. It was a Christmas in June theme, and we had a long scroll made by a bunch of students from all over Oakland saying that the kids of Oakland don’t want coal for Christmas. We were anticipating just going to his office, but there was an exchange very similar to the exchange with Senator Feinstein. That was the moment when I realized how much I love doing that work and how important climate justice is, specifically because of how central environmental racism is to climate justice, and how intersectional the fight is. I realized that that is where I belonged. This was at the end of my freshman year of high school. A lot of the people who were at that action were the original members of Youth vs. Apocalypse (YvA).

MAYA: Tell me more about Youth vs. Apocalypse. How did it evolve into what it is now?

ISHA: Youth vs. Apocalypse has undergone so much change in the past year. YvA started off as a fellowship with about 10 youth fighting this coal terminal. It’s grown into a coalition of people who are now working on national and global movements. We very quickly transitioned from this small group fighting local fights to organizing strikes that are a part of national and global movements, which is huge.

The purpose of YvA is to reshape the climate justice movement and try to save the world while doing that.

MAYA: You spoke a little bit about environmental racism and the importance of centralizing youth of color and Indigenous youth in climate justice movements. Are you working with other groups to bring that conversation forward? What does that look like for YvA in practice?

ISHA: YvA’s central mission is to do climate justice work in a way that respects what we’re trying to accomplish. When we’re asking for volunteers, we ask folks to think about their identity and their privilege. We are always having the conversation about what a movement that’s truly diverse looks like. There’s a very real difference between saying that you’re trying to empower youth of color versus giving a platform to youth of color. It’s not about giving power to youth of color, because youth of color already have power in them. They already have importance, they already have a presence, they already have ability. It’s about providing the space for them to claim that. That’s something that YvA is also trying to do. “I’m not going to call on you to speak because you’re a person of color. I’m going to give this space for you to feel comfortable to say that this is what you want to do.”

We are constantly having this conversation, and through having this transparency all the time, everyone in our group takes the task on themselves to look at who they are and how they’re privileged, or how the oppression that they experience may impact what they feel comfortable doing or what they feel their role should be in trying to challenge that. We make an effort to orient ourselves in a way that respects what we’re trying to fight for.

MAYA: How does this type of work happen when you collaborate with other people, both youth and adults?

ISHA: One of the reasons YvA wants to reinvent what the climate justice movement looks like is because historically the climate justice movement has not been about justice. It has excluded voices of color, and it hasn’t reflected folks most directly impacted by the climate crisis. This structure still exists in a lot of the ways that people are organizing, and it’s not necessarily intentional. I think it’s more about a lack of understanding, of not having lived the experience of being excluded or shut out. It’s work to make sure that when YvA is collaborating with other people that we’re on the same page about climate justice.

YvA has done workshops for other organizations about what it looks like to be an ally in the fight for climate justice. YvA is trying to do work within the movement and trying to move the movement forward. It’s a loaded task, but if we don’t address the same systems that got us to this climate crisis, we’re not going to be able to reverse it. We can’t actually meet our goal of reversing climate change if we don’t acknowledge the systems of oppression – like racism, white supremacy, and greed – that led us to the climate crisis.

MAYA: How do you see adult allyship working in youth-led movements?

ISHA: Adult allyship is actually very strong at this moment. Adult organizations will reach out to YvA asking, “What do the young people want to do?” Adult organizers are very much trying to follow the youth. There is still work to be done there too, because, yes, the youth need to be leading this movement, and I’m super glad that people are on board with that, but there’s also a point at which we get stuck … where we can’t do everything. There’s a difference between leadership and carrying everything.

It’s also true that a lot of these adults have been organizing for decades; they have a lot of experience. Young people aren’t disregarding the fact that we’re working with people who have a lot of experience. Youth should be envisioning what moving forward looks like, but with the support of people who have been doing this work, and who may know things that we don’t know. There can be more collaboration. Overall though, we have a lot of adult allyship, and that’s something that is relatively new and it’s working out well for us.

MAYA: It’s been neat to sit in on some of the meetings and witness how labor unions are showing up and supporting youth-led movements.

ISHA: I was just saying that that’s one of the most exciting things for me, that we’ve gotten so many labor unions on board. That’s something very new, and I think it’s super powerful. When we’re talking about the Green New Deal, one of the arguments from the other side is always that labor doesn’t agree with it, that it’s not good for them, they don’t want it. This collaboration between YvA and Labor is proving everyone wrong. This coalition building also reinvents what the climate justice movement looks like.  Climate justice includes labor unions. Labor unions are fighting for the Green New Deal and for climate justice, and I think that’s super powerful.

MAYA: I want to close out by talking about the Global Climate Strike. How is YvA involved in the September 20th Climate Strike? What’s your role both locally and nationally?

ISHA: YvA is definitely one of the leaders of the Bay Area Strike. We decided that we wanted to have seven demands for the seven days of the strike, each with a direct call to action. We’re also doing a lot of outreach. One channel of outreach is doing a lot of school presentations and talking to teachers. We’ve been super successful at getting teachers to make the climate strike a field trip, getting BART passes and school buses for people who need support in getting to the Strike. Through all of this, we’ve been able to get a lot of Oakland public school students to come to the strike. We’re also working on this in San Francisco. There will be a lot of students at this strike, which is going to be super powerful, because that’s exactly what we want.

We’ve also been coordinating with adult allies who are working with us. YvA’s main thing is the September 20th General Climate Strike. There will be a week of actions following that where other local organizations have their own events, but we’re all in collaboration. With all of us working together, we’ve been able to coordinate a lot.