A Dish to Share: How Bioneers Thought-Leadership was a Key Ingredient in Acclaimed Food Writer Michael Pollan’s Recipe for Impact 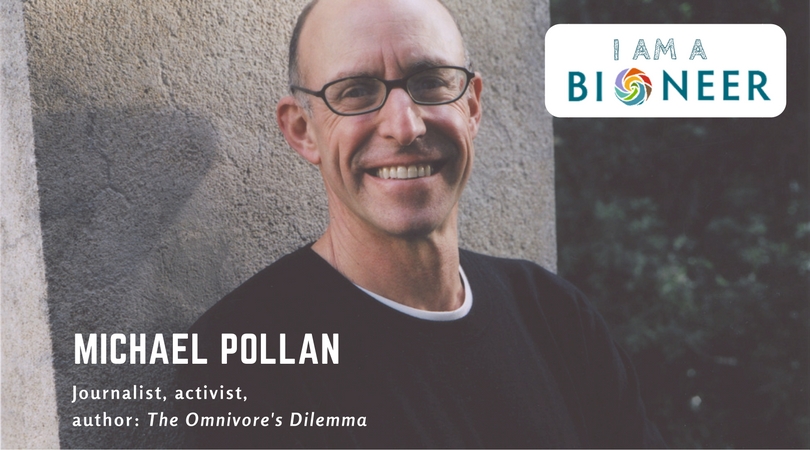 If you have even a passing interest in food, you’ve heard of Michael Pollan. The award-winning, best-selling author, longtime contributor to the New York Times Magazine, frequent Bioneers speaker, and star of the current Netflix documentary series Cooked, Pollan has been part of the national conversation about where food, nature and culture intersect for the past 25 years.

What even the biggest foodie may not know is that winding throughout his illustrious, impactful career has been Pollan’s connection with Bioneers, a thought-leadership incubator that breeds and bolsters some of the planet’s biggest movements and most visionary thinkers.

Although it’s hard to identify a seminal moment in Pollan’s remarkable career, it was his 2006 book, The Omnivore’s Dilemma—named one of the year’s 10 best books of 2006 by both the New York Times and the Washington Post and winner of the James Beard Award, among many others—that launched him to national and international acclaim. Pollan wrote in the introduction to the book, “If we could see what lies on the far side of the increasingly high walls of our industrial agriculture, we would surely change the way we eat.” The Omnivore’s Dilemma sold millions of copies, helped millions of us understand our agricultural economies and supported a major and ongoing shift towards a desperately needed “alternative food economy.” And it was Pollan’s relationship with Bioneers that sparked one of the critical connections that made that book possible. In fact, Pollan credits his relationship with Bioneers co-founders Kenny Ausubel and Nina Simons, and through them connections to the Bioneers community, with helping set direction throughout his whole career.

“My conversations with Kenny and Nina have produced crucial introductions and leads that have in some cases sent my own research onto entirely new paths,” Pollan says. “For example, when I began researching the food system for…The Omnivore’s Dilemma, it was Kenny who first told me about a visionary animal farmer in the Shenandoah Valley, Joel Salatin, who became a central figure in that book, and has since emerged as one of the most influential farmers in America. This is how innovation sometimes enters a culture.”

For more than three decades, Simons and Ausubel have led Bioneers, now known for its knack in providing a platform from which some of the world’s most inspirational minds and change agents are able to speak and connect. “For the past quarter century, Bioneers has gathered together some of the world’s most visionary thinkers on the human implication in nature (and vice versa),” Pollan says. “I have had the privilege of speaking there on several occasions, and every time I leave thinking I learned more than I taught. At Bioneers, I met for the first time people like Paul Stamets and Wade Davis, who have come to figure largely in my own own work.”

When they added Pollan to the list of visionaries within the Bioneers community, Kenny and Nina were on the mark again. Named a 2010 Time “most influential person,” and a 2009 Newsweek top 10 “new thought leader,” Pollan may be among Bioneers’ most famous family members. It’s been a relationship of mutual admiration. “Bioneers is one of the key incubators for innovation in the area of biology, a medium by which small and fringe-y developments are identified and nourished and then introduced to the mainstream,” Pollan says.