A Thanksgiving Reflection from the Bioneers Indigeneity Program 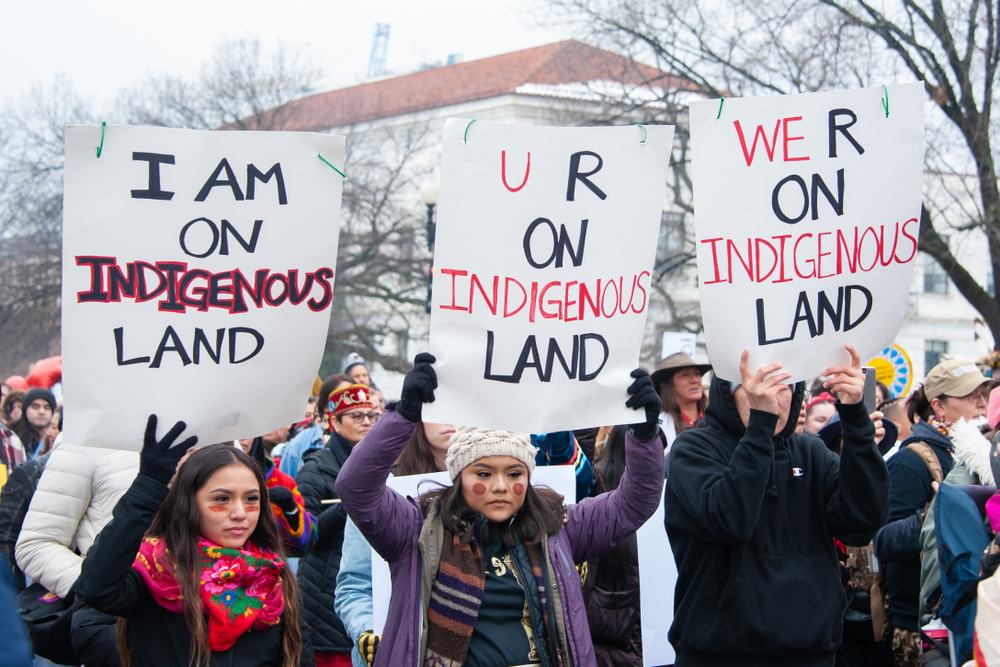 As Cara Romero and I reflect on what it means to be Indigenous in America, 2019 has certainly been a year of extremes. From the swearing in of the nation’s first two Native American women to the House of Representatives in January, to the Trump Administration’s recent rebranding of November as “Native American Heritage Month” to “National American History and Founders Month,” we are reminded that the 518-year, ongoing land grab in this country is rooted in rhetoric. A simple phrase, “Make America Great Again,” can normalize a massive push to offer up sacred Native lands for drilling to the highest bidder.

On the other hand, the simple phrase, “Rights of Nature,” can ignite a revolution, as you can see through Casey Camp’s powerful keynote speech, Aligning Human Law with Natural Law, at Bioneers last month, and Congressperson and Laguna Pueblo tribal member, Deb Haaland’s commitment to the Indigeneity Program’s “Rights of Nature Tribal Governance” initiative to support US federally-recognized tribes in self-determining the well-being of their ancestral territories for future generations.

Three years ago, I shared “3 Ways to Decolonize Your Thanksgiving,” and two years ago, “How to Indigenize Thanksgiving.” At this time last year, I had a fascinating conversation with my friend, Chris Newell, Passamaquoddy tribal member, and co-founder and Director of Education of Akomawt Educational Institute. (By the way, we showed the Emmy Award winning film he advised, “Dawnland,” at Bioneers this year.)  Chris explained to me how the Thanksgiving Holiday was “invented” by a prominent New England woman writer, who lobbied Abraham Lincoln’s administration to proclaim Thanksgiving as a National Holiday to unify a Nation recovering from the Civil War.

Chris and I also talked about complex tribal relations in the area, that perhaps the Wampanoag –who had already an estimated 80%+ of their tribal members to war and disease– allied with the Pilgrims as part of an effort to protect themselves against other tribes in the area. So for Thanksgiving this year, I’m thinking about the Wampanoag, whose tribal member, Tisquantum, showed the Pilgrims how to raise corn, making it possible for the Pilgrims to settle permanently.

Also last year, the Trump Administration reversed a decision to return 321 acres of land in trust to the Mashpee Wampanoag to self-determine their future on land they have tended for 12,000 years. Given this state of affairs, I’m feeling a little more deliberate about how I will celebrate Thanksgiving this year. It is in this spirit that I’d like to share some events taking place around the country for Thanksgiving that you might join, or simply reflect upon as you gather with your family for the Holiday.

New Englanders can join the 50th National Day of Mourning at Coles Hill in Plymouth Massachusetts at 12 noon hosted by the United American Indians of New England. Tribal member, Danielle Hill, who shared her insights on the connections between food sovereignty and traditional birthing practices in the 2019 Indigenous Forum panel, “The Circle of Life—Women as Life-Givers and First Responders” will be there.

West Coasters can attend the annual Indigenous Peoples’ Sunrise Gathering at Alcatraz Island. Many of our friends will be there, including organizer, Morning Star Gali, who offered powerful and moving words at the 2019 Indigenous Forum Panel, “MMIW – Native Women on the Mother Earth Road from Violence to the Sacred.”

Those of you living in the Southwest are invited in peaceful prayer to join former Chairman of the San Carlos Apache tribe, Wendsler Nosie, in a march from San Carlos to Oak Flat, a sacred ceremonial site awaiting a death sentence of copper mining in 2020. Wendsler’s granddaughter, Naelyn Pike, gave a powerful keynote, “Youth Leadership for a More Just Future” at the Bioneers mainstage in 2017 as a part of the Apache Stronghold movement. Wendsler will return to live in his ceremonial ground in an invitational prayer.

As fellow Bioneers, we call on you to be aware of these events taking place, as the endless assault on Native American lands, religions, and lifeways continues today. We know that you reading this are allies, and that we will win the fight to protect our ancestral territories for all of our future generations of Americans.