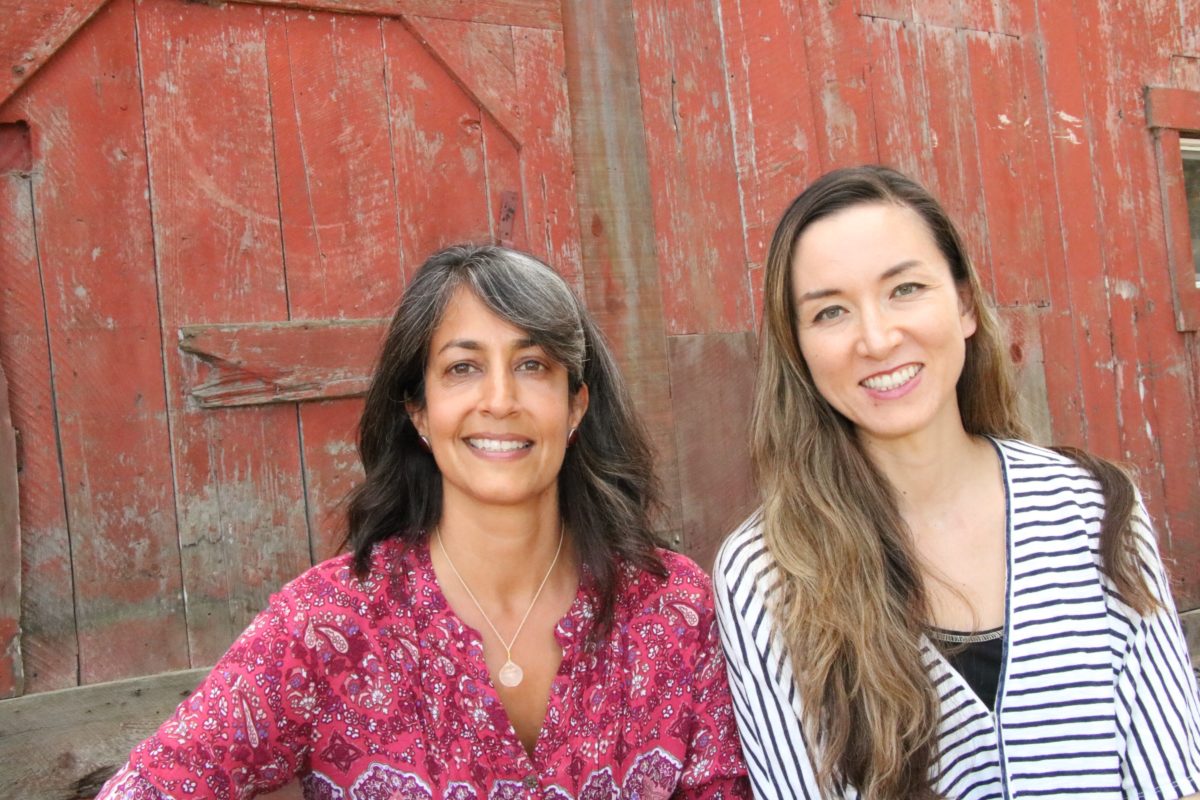 In 2016, San Diego County began developing a climate action plan consisting of a set of legal commitments to reduce greenhouse gases with specific targets, ultimately adopted in 2018. The same year Elly Brown, Director of San Diego Food System Alliance and Dr. Puja Batra of Batra Ecological Strategies first met at the Montado Ranch in San Diego where the Marin Carbon Project was putting in a test plot to see how compost applications on Southern California soils could sequester carbon from the atmosphere. At the Montado Ranch, Elly and Puja began a conversation about the opportunity for agriculture to play a significant role in meeting county climate action targets. That conversation developed into a partnership to develop a strategy linking climate action to Carbon Farming. Brown and Batra gave this talk, transcribed and edited below, as part of the Bioneers Carbon Farming Series.

Agriculture is one of the largest industries in San Diego County, a unique agricultural region with the highest number of organic farms of any county in the nation as well as a large number of conventional farms. The San Diego Food System Alliance (SDFSA) views Carbon Farming as an opportunity to support the small farms in the region because, like many other communities, development pressure, cost of water, cost of land and disconnected consumers are all driving small farmers out of business. The vision is to include the agricultural community as part of the climate change solution and to support the long-term sustainability of farming in San Diego County.

Carbon Farming at the community level requires collaboration. We were able to bring together stakeholders from different organizations that can play a role in support of Carbon Farming from the financial perspective as well as the ecological perspective. We brought together county agencies – agriculture, solid waste, watershed protection planning, public health, regulators, air pollution control district – as well as the Farm Bureau, resource conservation districts, financing agencies, farmers and ranchers, private sector parties engaged in sustainable sourcing and others.

The ultimate goal is to catalyze a coordinated and comprehensive Carbon Farming program in our region that is embedded within our existing government institutions and supported by the nonprofit partners in the community. SDFSA, with support from ecological strategist, Puja Batra, is developing a road map for carbon farming in the region.

The Marin Carbon Project put a test plot in at Montado Farms, in San Diego County, to look at the effects of rangeland compost application in Southern California soils. At about the same time the County of San Diego was starting to develop a climate action plan, which is a set of legal commitments that the County makes outlining how to reduce greenhouse gas emissions.

Agriculture presents a big opportunity for the county to meet some of its climate action targets with respect to reducing greenhouse gases, but also with respect to building resilience, because in addition to needing to reduce our greenhouse gas emissions, we’re facing a lot of climate resilience challenges that are already happening and we have to start addressing them. Carbon Farming is one of the few tools available that addresses both mitigation and adaptation to climate change. SDFSA developed strategies to highlight the fact that farmers and ranchers have a big role to play by employing Carbon Farming practices, providing a service to the rest of us.

The resilience value of Carbon Farming brings in synergies among different players and different government agencies and other organizations and may open up some new resource and funding possibilities. By putting our heads together, getting more people at the table and finding new ways to pool resources, we can, hopefully, begin to develop some incentives for farmers and ranchers to employ the practices and then scale them up.

The San Diego Foundation funded SDFSA to ask a few questions: Just how big a carbon sink is soil? How much can our soils help us with our greenhouse gas emissions problems? Where do some of those local and state policy and program synergies exist? How can we find ways to creatively come up with resources to develop incentives to scale up the practices?

In seeking answers, it is important to understand the existing nature of agriculture in San Diego and what challenges and opportunities exist. The median size farm in San Diego County is four acres. The average age of a farmer in San Diego is sixty-two, which is consistent with the rest of the country. This, of course, poses some troubling uncertainty about the future of agriculture in our country. Incoming farmers are often first-time, first generation farmers. That presents both some challenges and some opportunities. Some of the barriers to entry are access to capital and education and training. How can we use this as an opportunity over the next decade to make a wholesale transition from conventional farming to farming practices that are necessary and relevant for the challenges of future decades? Can we make a wholesale transition to carbon sequestering practices, and do that by addressing some of these barriers?

We made a general recommendation that the county focus on training and facilitating the new generation of farmers to succeed in regenerative agricultural practices.

Having the largest number of organic farms per county in the nation gives us some baseline knowledge on how important it is to build soils. The return per acre for ranching is low and is declining. We have very few full-time ranchers. Almost 70% of local agriculture is in orchards, so there’s already a lot of carbon sequestration going on. It’s not perfect, but it’s a very solid foundation. We need to recognize these strengths and understand how we can make improvements while recognizing our farmers and ranchers for their contributions.

The nursery and cut flower industry is the second largest type of agriculture in San Diego. This industry presents some challenges in terms of carbon sequestration. Much of that growing is done in containers and very often the containers are filled with non-soil media. We don’t know what the sequestration value of that approach is, but nurseries are a growing part of our agricultural system because they are, economically, a little more viable than growing food. On the one hand, it’s not contributing to food production or contributing to carbon sequestration, but it is holding a space for agriculture and helping us keep down the rate of sprawl. We don’t have very much row crop agriculture, with only 7% of San Diego agriculture in vegetables. This implies a relatively low amount of tilling, a farming practice that releases greenhouse gases. All this taken together provides a solid foundation for discussing Carbon Farming moving forward.

San Diego has lost about 25% of its orchards over the last ten years. The loss of these orchards can be thought of in terms of the loss of the molecules of stored carbon in those trees as well as the lost sequestration potential that never happened because of the removal of those trees. Summed up, this amounts to over 300,000 metric tons of CO­2 over the last decade. This attrition rate is quite high; 25% in ten years is significant.

That number isn’t accounted for in the way that climate action plans estimate current baseline emissions. The fact that we lost all that sequestration is invisible. We had to point that out to the County climate action team so they would recognize that if you don’t count it in the baseline, you are ignoring the net higher emissions that result from agricultural land being converted to any other land use. There’s almost no other land use that’s going to be lower emissions than an orchard with one hundred trees per acre. Even if you let it convert back to natural habitat, it’s not going to have that kind of sequestration rate initially.

Pointing that out to the County resulted in a recommendation to conserve the existing carbon storage and future sequestration by addressing the root drivers behind orchard loss, which is the price of water along with some fire-related loss. The price of water is a huge problem in our area. We made recommendations about the use of recycled water in the county for agriculture. We are talking to the County climate action team about this to make the point that investments in water are not just investments in resilience, they are also investments in mitigation.

The Department of Public Works solid waste management team has developed plans for reducing the amount of organic waste and food waste that goes into landfills. They estimated how much is being thrown away that could be composted, and how much compost it could produce. We posed the question, “If all of that compost were used on farms and rangelands, how much carbon could it sequester?” Estimates were made using the online Compost Planner and COMET Planner tools that California’s Healthy Soils program has been involved in developing. We feel the county will be comfortable with the numbers that we came up with because those models are state sanctioned tools. The question is how can we get the people that deal with these problems at the table to find ways to promote those specific practices that build synergies with other departments, and really make this a multi-agency effort?

Looking at the Whole System

Our last recommendation was to convene a taskforce to start looking at these questions in a very detailed way, and make sure that we develop a Carbon Farming program that can be absorbed by existing institutions in the county, government and non-government. There are many players that are engaged in some way in agriculture and we want them to adopt the science, the philosophy, the economics of local needs and to institutionalize Carbon Farming as an essential standard operating practice.

The role of the taskforce will be to build a Carbon Farming program that is grounded in science, economic needs, regulation and the needs of the region, and to catalyze a coordinated program within the existing institutional matrix. We hope that over the next decade, we’ll transition to a situation in which San Diego’s agricultural community is a key partner in developing a resilient and climate-friendly region.