Agriculture and Climate Change: An Interview with Darren Doherty 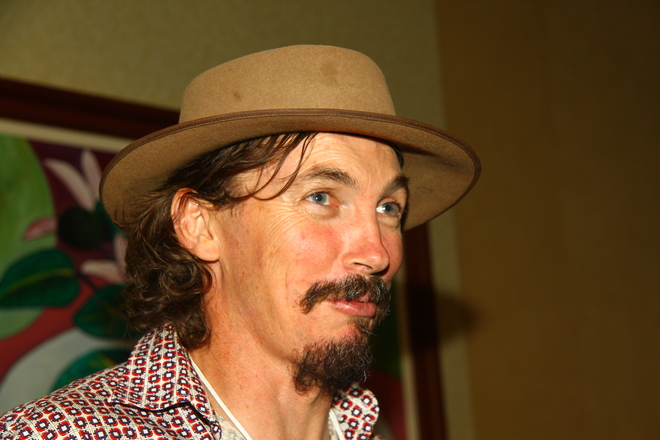 Darren Doherty has developed a set of ecological agricultural practices for large-scale farming that he calls Regrarianism, based on the work of master agrarians like Rudolf Steiner, Joel Salatin, Elaine Ingham and others. Regrarianism integrates Permaculture, Keyline design, Holistic management and carbon farming to transform farms from their current atrophic condition into regenerative systems that provide ecological profit as well as economic benefit.

Bioneers: What are the basic principles of Regrarianism?

Bioneers: How does Regraranism help farmers mitigate and adapt to climate change?

Darren: One of the things we look at, which might seem like an unusual climate change strategy, is reducing debt, which in an agricultural environment is really crippling because it disempowers farmers from making the land stewardship decisions they would normally make. We try to get the debt out of the way by getting some higher margin activities in the stream of an enterprise so we can start to self-fund the more regenerative practices.

Darren: We can start to build more soil carbon into the equation because that’s one of the great buffers against climate change. Not only does it download atmospheric carbon out of the process, but it also creates a resiliency against the biggest problem in a lot of zones where there has been reliable rainfall in the past and now rainfall is unreliable.

Bioneers: How does carbon farming work?

Darren: There’s an amount of carbon right above any landscape that can be utilized, primarily in the form of carbon dioxide and other carbon compounds that soil organisms, plants and others use as nutrients.

We’re looking to create systems that hold more of that carbon in the organisms and the residues of those organisms for the longest possible times, and then take advantage of the benefits that the diversity and the residues provide. Whether that’s residues in the form of humus, which is a very stable carbon-compound, or whether it’s residues in terms of a leaf litter that’s on the soil surface, which reduces evaporation.

We’re trying to increase the retention time of carbon in its solid form in landscapes for as long as possible as opposed to allowing it to become gaseous, that’s when it becomes quite dangerous to us all. That is what carbon farming is all about.

Bioneers: What’s the relationship between carbon and water?

Bioneers: Can enough carbon be sequestered in soil to significantly mitigate climate change?

Darren: The only place in the world where there’s more carbon than in the soil is in the ocean and in the sedimentary rocks. ­ We try to build in our system multiple elements with trees, ground cover, canopies of grasses or other plants, that keep carbon in its place for as long as possible, and therefore also hold water in place. ­

Bioneers: What’s the best way to keep carbon in place for as long as possible?

Darren: You have to understand the different kinds of carbon and the states of carbon soils. Let’s look at compost, for example. Depending on the state of compost and how it’s made, it’s largely made up of what are called short-chain carbon molecules. So mulch, compost, leaf litter, cover crops, all of these things aren’t processing carbon into its long-chain form. It’s quite unstable, so as a result a lot of that carbon ends up being put back into the atmosphere.

Compost and cover crops certainly have a conditioning effect on the soil, but a lot of that carbon is being cycled within the top six inches of the soil, which is the highly aerobic zone of the soil, so carbon therefore is in a greater stage of flux.

Bioneers: Are you saying compost and cover crops are not effective ways to sequester carbon?

Darren: You might increase your net soil carbon quite heavily in the first few years by the application of compost, and all of the aforementioned methods, but will that last over the longer term? The answer is quite clearly no. Great techniques, great to do, but what we need more of is long-chain carbon. It’s largely delivered in the form of polysaccharide exudate or nutrients released from plant root systems, particularly grasses.

Where we want the carbon and where farmers can look to increasing their carbon levels overall is in the depth of soil. You can have 10% carbon in the top six inches and 2% in the next 10 inches, and 1½% in the next 10 inches. That’s not going to sustain agriculture over the long term, and the top 6 inches is not where carbon is going to be kept and stored and sequestered. It’s pretty well impossible to get that short-chain carbon down into the depths without a lot of intervention, which requires a lot of fossil fuels. The best way to do that is to get plant roots to penetrate these depths and to put their exudates down in those depths. There are carbohydrates created out of the interaction between water, sunlight and carbon dioxide, and then manufactured by the plants as a residue, and their primary objective is to feed the soil microlife.

Bioneers:  So deep-rooted plants are key to this process.

Darren: What drives the sustenance and the regeneration of the soil life is the plants. The plants are the conduit between the atmosphere and the lithosphere [the Earth’s deep outer layer, which includes soil]. They keep the lithosphere, the soil, and the rhizosphere, the root zone, alive, because they transfer the energy of the sun, manufacture the sugars as carbohydrates, as long chain carbons, and that’s what feeds the economy of the soil.

I’ve been talking a lot lately about the relationship between using perennial systems and annual systems as an analog of our own human economy, and how if I look at an annual plant, for example, it lives fast, it dies young, it’s quite profligate in the use of its resources because it leaves very little of the residue behind, it doesn’t have any savings; its whole objective is to reproduce.

If you look at a perennial plant, particularly a perennial grass, it puts very little energy into being in a nightclub, it has very fibrous, deep root systems, which have long, long term arrangements with the whole suite of soil life, it has all the very cultivated and highly developed and synergistic relationship; it has a carbohydrate starch reserve, which is like a bank where it puts a lot of its capital flows out into the general soil economy over the longest period and often when it’s not raining, and it puts something behind so when disturbance occurs, it can come back. In fact, in many cases, it actually thrives on disturbance.

I think a lot of economists in the financial sector, if they wanted to know what would be a good model to base economies on, they could probably look no further than a tree or a forest or a perennial grass. Much of our agriculture is annual based. We’re living fast and dying young.

Make sure to see Darren’s sessions at the 2013 National Bioneers Conference: