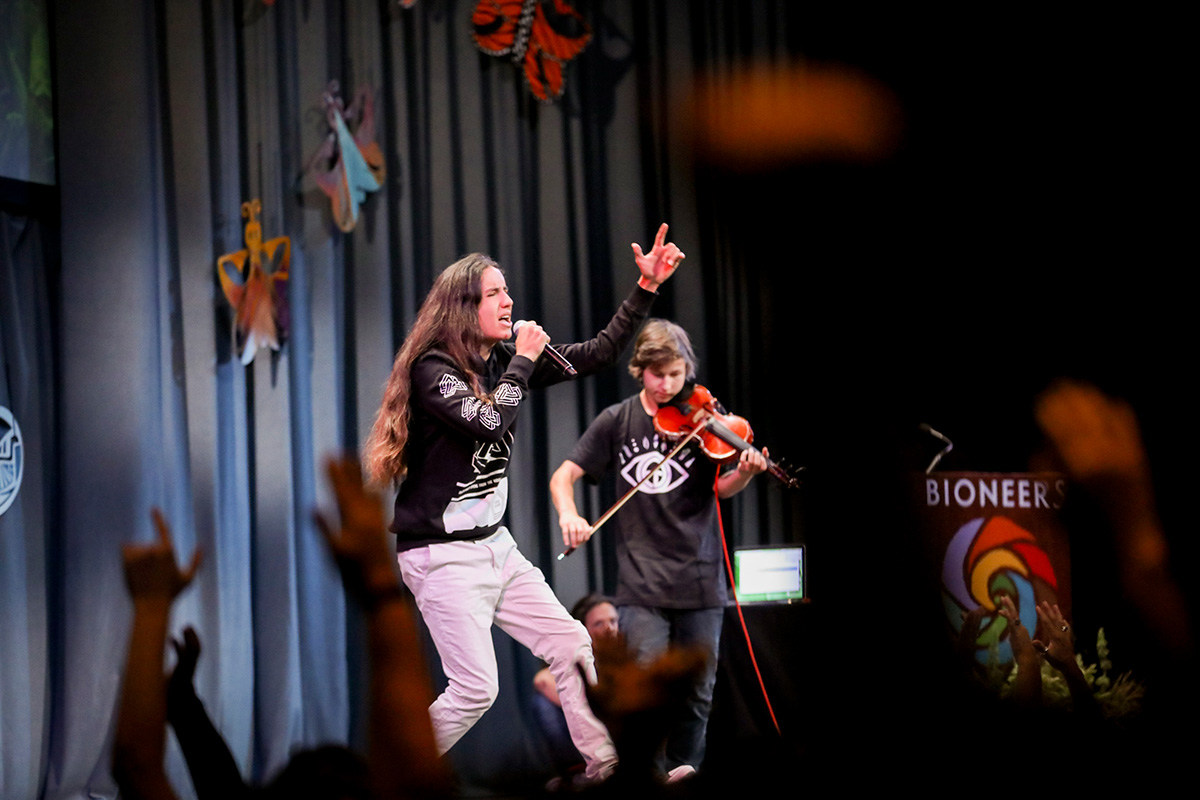 As you may already know, Xiuhtezcatl Martinez is now a member of the Bioneers Board of Directors. The burgeoning young hip-hop artist is one of the main voices of his generation in the fight against climate change. As part of Bioneers’ celebration of Earth Day 2017, we talked to him about why it’s important for young people to be engaged in matters they care about. He also shared his biggest victories throughout his journey as an environmental activist.

Feeling inspired? Then share this with your friends and support us in elevating the voice and message of a generation!

Bioneers: How did your relationship with Bioneers start?
Xiuhtezcatl Martinez: I think I was invited to speak at Bioneers for the first time in 2012 or 2013. It was such an incredible opportunity to be immersed in a community where there’s a strong representation of youth and of Indigenous peoples, I was stoked by that. I hadn’t really seen that in a whole of other places, Bioneers really captured the importance of diversity of ideas in this movement. It was fun, it was beautiful, it was one of my first times in California and I continued to return ever since. From the organizers to the attendees, everybody was stoked to be a part of this monumental shift.

Bioneers: Why is it important for you to be a part of our Board of Directors and how will the organization benefit from it?
Xiuhtezcatl: For me, it’s important to be a part of the Board of Directors because I think I’ll both learn a lot and gain a lot of experience from this. And I think I also have a lot to offer as far as bringing a fresh, young perspective to a lot of the ideas. I think that the future of this movement begins with youth and therefore we need to begin bringing young people further into the decision making process than we have traditionally done.

Bioneers: You started your activism journey really young. What urged you to get involved?
Xiuhtezcatl: I think what got me super interested in engaging in environmental and climate activism and all of this when I was younger was just the deep connection and respect I have for nature. I love being outside, I love being in the forest, in the mountains. My father taught me to have a really significant connection with that and this is such an important thing. I think that once I began to see the actual impacts that humans were having in our environment it really pushed me to fight to protect what I love, which in this case was Earth, was the environment. I had that sense of connection that allowed me to realize the importance of fighting for something that I believed in.

Bioneers: Why is it important for youth to get engaged in causes like fighting climate change?
Xiuhtezcatl: Climate change is primarily affecting young people and is going to primarily affect this younger generation in the future, not the adults, because the adults will be gone when the greatest impacts of climate change are felt. I think there’s such a critical connection between youth and the state of action on climate change. I think that more young people need to be involved because first of all, we’re powerful and our voices need to be heard. We’re passionate, we’re entrepreneurs, we’re creative. The way we think about movements and issues like these is really out of the box, diverse, and this movement needs that. I think we need to break down the barriers and the walls that identify climate change purely as an environmental issue. It’s about human rights, it’s about our future, it’s about justice. Young people have a really important role in changing the entire conversation about climate change with the understanding that the importance of solving this issue is building and creating a multi-generational, diverse, creative solution-based movement. And that it’s gonna come from the youth because what we are fighting for is nothing more than our future.

Bioneers: What were your biggest victories in this fight so far?
Xiuhtezcatl: Two different lawsuits. One of them being the class-action lawsuit against the US Federal Government. Essentially, in this lawsuit we’re asking for massive primary recovery plans to be put into place by our government because of their failure to defend our constitutional rights from adverse climate impacts. A motion to dismiss was filed by the US Government and the fossil fuel industry, but after that two different judges signed on with us, with the youth, that we have the right to file a lawsuit, that our government does have the responsibility to protect us from climate impacts, that a sustainable climate is a fundamental right for young people. So that was a huge win that we had and we’re now taking this on to court.

There were different wins locally in Colorado as well such as banning fracking in five different municipalities and transitioning my own personal community in Colorado to getting off of a power grid controlled by Exxon Energy.

Another one is the birth of the Earth Guardian movement, how it went from just a handful of small crews, to thousands and thousands of people across the planet engaged and excited about making a difference in the world and using their passions to create change. I guess the biggest victory that I’ve seen is individually inspiring people to act and do a little be more and be better. Yes, we can change laws but the biggest thing you’ve got to do is change the hearts and minds of people and from then the movements that will create the big changes will follow.

Bioneers: Who are your biggest idols?
Xiuhtezcatl: Van Jones is one of the most inspiring spokesman of our times. He’s very involved in the environment, in politics, in racial and social justice, economic justice. I’m super stoked to have him really engaged in this movement. A lot of my other idols are artists as well, musicians and people who use their platforms to talk about important issues and about change – Kendrick Lamar and Joey Badass being two of them. There’s a lot of cool people out there, the power of using art to influence change is huge.

Bioneers: What should youth be paying attention to now?
Xiuhtezcatl: Youth should definitely be paying attention to Bioneers. Bioneers is a huge step forward in the climate justice movement and the evolution of human consciousness. Their whole movement really creates incredible things in humanity today, building solutions looking to the kind of world we want. Especially for young people that want to be involved in the world, I think that Bioneers is definitely something to keep track of.

My organization Earth Guardians is also super cool for youth that want to get involved. I think it’s important to look at it as an opportunity and a platform to engage and use your passion to do something about the problem you care about. Go to the website and reach out to us to get involved.

Our Children’s Trust is involved in getting young people engaged in legal actions to address climate change particularly and different environment solutions.

Looking at energy too, I think it’s cool to check out this project called The Solutions Project to check out the implications of transitioning to 100% renewable energy.

And there’s plenty more out there. Go Google, search it out, there’s a lot you can find out.