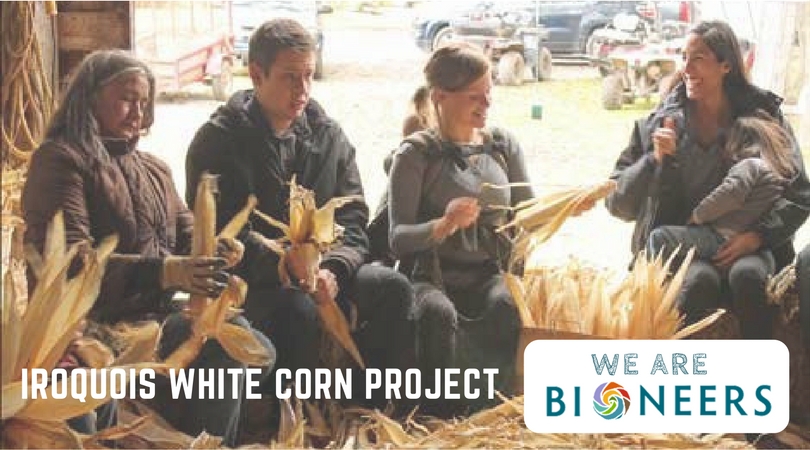 In 2006, John Mohawk — Seneca author, historian, and professor — spoke on a Bioneers panel about traditional Indian knowledge and nutrition. Before Columbus, said Mohawk, Indian nations made choices about their food crops not based on profit potential, but on sustainability and nutrition. Often inhabiting the same locations for hundreds of years, these Indigenous Peoples became experts in the medicinal qualities and nutritional potential of native plants. Among the most important of these was corn.

The corn that Indian nations ate pre-1492 wasn’t the same as the corn we buy at grocery stores today. Because it was intended to be as nutritionally fulfilling as possible — rather than as easy to propagate as possible — the corn grown by Mohawk’s ancestors was dense in nutrients, protein, and fiber. Moreover, the corn was slow to digest, making it particularly filling, and it was a low-glycemic index food, making it a smart staple food for preventing diabetes. In practically every way, the corn grown and consumed by Indigenous Peoples was superior to most modern, widely consumed varieties found in stores and restaurants today.

Among the many terrible effects of the European colonization of North America was the gradual degradation of Native agricultural practices. Vast stretches of Native farming lands were destroyed by white colonists, who were threatened by the potential market competition of Indigenous corn. Seeds and stores of corn were destroyed, too, making any future farming — and, in fact, living — extremely challenging for the people who once owned and inhabited North America.

The European colonization slowly but dramatically changed the way Indigenous Peoples interacted with food. Unable to grow their own crops, their relationship with and understanding of the plants they once cultivated began to dwindle. European farming practices optimized agriculture for financial gain, prioritizing yields over nutrition. The type of high-quality crops once prevalent in North America became hard to find.

The development of processed convenience foods in the 20th century took an additional toll on Native communities. Diabetes rates sky-rocketed. Government agents convinced Indigenous people that traditional farming practices and native crops that sustained them for centuries were inferior, and that they could trust industrially produced food.

Though Native diets and environments had changed, Mohawk was determined not to give up on tradition. “People left stories, and they left records about how they did things, what they did, what they ate, how they prepared their food and where they got their food from,” he said. “How they used medicine and everything, it’s available to us. It’s not lost, it’s just not used.”

The Creation of the Iroquois White Corn Project

Mangan headed up the task of creating a large market for the White Corn. By connecting Mohawk with well-known names in the restaurant industry, Mangan helped Iroquois White Corn reach new, discerning customers. Eventually, Mohawk’s corn was being served at Chicago’s Charlie Trotter’s, a two-star Michelin restaurant; Bobby Flay’s Mesa Grill in New York; Judy Wick’s White Dog Café in Philadelphia; and even once at the Environmental Media Awards celebration. The project itself received significant press, and after Gourmet Magazine described “the rich, toasty flavor” of Iroquois White Corn flour, more than 100 readers called to order 10-pound bags for the holidays.

Both Mohawk and Dion-Buffalo passed away more than ten years ago, but their work with the Iroquois White Corn Project lives on. The Project no longer focuses on selling crops to high-end customers. Instead, White Corn products are produced for sale locally and online. Bioneers raised the funds needed to work with Mohawk to streamline the Iroquois White Corn Project in such a way that it could be easily turned over to Native employees.

The Iroquois White Corn, sometimes referred to as “Tuscarora White,” grown by Mohawk and his ancestors has been added to Slow Food USA’s Ark of Taste, “a living catalog of delicious and distinctive foods facing extinction,” which aims to keep endangered, historical foods in production.

Watch a video of John Mohawk speaking at Bioneers 2006 below: