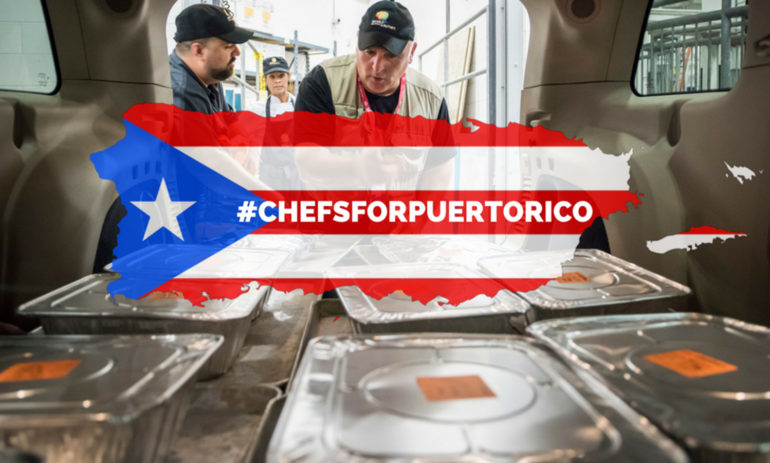 Celebrity chef Jose Andrés, best known for his restaurants Jaleo, minibar, and Zaytinya, is working alongside local Puerto Rican chefs to feed more than 5,000 Puerto Ricans per day in the wake of Hurricane Maria.

Andrés and his team at the World Central Kitchen (WCK) are coordinating a large network of volunteer chefs and food service workers to collect donations from around the country, transport them daily to Puerto Rico, and prepare thousands of meals in borrowed kitchens and food trucks on the island.

In addition to feeding some of most vulnerable residents of Puerto Rico’s capital, San Juan, the WCK network is making a concentrated effort to feed the staff of hospitals and elderly homes, who are working long hours in increasingly desperate conditions, according to WCK Communication Director Kevin Holst.

Dubbed “Operation #ChefsForPuertoRico,” the campaign seeks to draw attention and resources to the plight of the island’s 3.4 million residents, most of whom are citizens of the United States and remain without water, electricity, or food, according to the Pentagon. Hurricane Maria was the strongest storm to hit Puerto Rico in more than 80 years.

In addition to wiping out power to the entire island and disabling 90 percent of cellphone towers, the storm also decimated Puerto Rico’s food systems. Before the hurricane, Puerto Rico already imported about 85 percent of its food, though the island’s agricultural industry had been growing steadily, according to Carlos Flores Ortega, Puerto Rico’s secretary of the Department of Agriculture. In a matter of hours, Ortega reports, the hurricane destroyed more than 80 percent of the island’s existing crop value. Residents will now be forced to rely almost exclusively on imports until they are able to rebuild their food systems, a process which will take years.

WCK’s response follows the network’s recent work in the aftermath of Hurricane Harvey, which impacted the region surrounding the city of Houston, Texas in August of 2017. After Harvey, the WCK network coordinated donations of over 1 million pounds of food and served 20,000 meals for Houston residents.

Click here to donate to ongoing relief efforts by Jose Andrés and the World Central Kitchen.