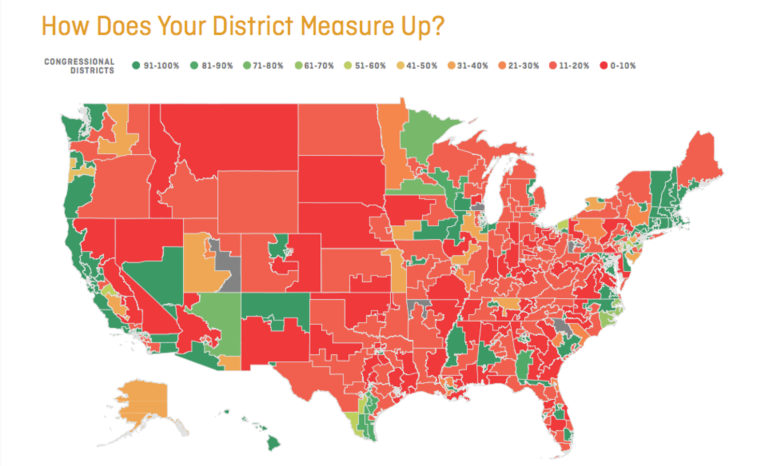 FPA reports that the scores are down significantly this year because neither the House nor the Senate spent much time on food issues, leaving FPA with little to grade. Senators were graded on 1 vote and their co-sponsorship of 10 bills, while Representatives were graded on 5 votes and 11 bills.

Any U.S. citizen can view the grades assigned to their Senators and Congresspeople by FPA via an online scorecard tool.

Ken Cook, a co-founder of FPA and the President of the Environmental Working Group, explains that the scorecard highlights a “frustrating lack of bipartisanship on food policy votes.” According to Cook, “food policy is not a partisan issue. Congress should prioritize a more balanced, healthy and sustainable food system. With this year’s report showing great room for improvement…voters need a clearer sense of where their legislators stand.”

FPA designs the scorecard to capture the full spectrum of policies impacting the food system in an attempt to demonstrate the connections between them. “We believe this annual overall snapshot will help break down silos in the food movement so that the members themselves, and the public, recognize the multiplicity of issues impacting food, they write.

This year, while 220 members of Congress received perfect scores of 100 percent,130 members were given scores of 0 percent, the lowest possible.

“We deserve better,” said Tom Colicchio, another co-founder of FPA. “Congress has allowed the political dysfunction of a new Administration to not only prevent positive food bills from moving forward but to roll back basic critical protections that keep our food system safe. FPA will continue to hold members of Congress accountable for the votes they cast – or I should say lack of votes this year – that impact food and our food system,” said Colicchio.

The scorecard did grade a handful of bills and votes positively. “We applaud those in Congress who broke through the noise to raise their voice for the good food movement,” said FPA Executive Director Monica Mills. “Their efforts did not go unnoticed.”

Mills also suggested that the scorecard should have a direct bearing on the 2018 midterm elections. It will assist FPA and other organizations working in the food movement to determine their strategy moving into 2018 and help voters decide which lawmakers’ food policy records should earn their votes. According to a poll published by FPA, food issues are highly persuasive among likely swing voters.

“While this year’s Scorecard shows a weak Congressional agenda on food policy, this is only a midterm score,” said Mills. “Congress has a huge opportunity to show leadership on these issues as we move into discussions ahead of the 2018 Farm Bill. It is our job to hold them accountable during the next election cycle.”