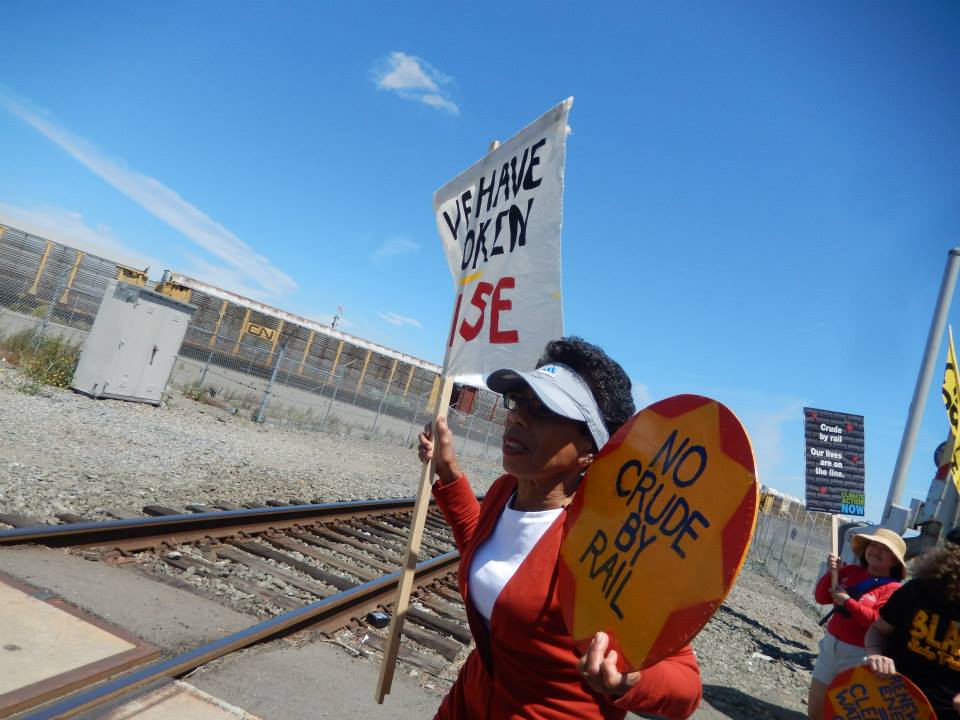 On July 17, 22 out of a 106 train cars bound for a refinery in Anacortes, Washington derailed and spilled 35,000 gallons of oil in northeastern Montana, downing a power line, closing a major highway, and forcing evacations in a nearby town. While no one was injured, the accident came just hours after another derailment had shut down rail traffic through the area. The accident also came on the heels of six other major derailments just this year, including several explosive spills, exposing the still-unchecked dangers that oil trains pose. Indeed, the incident was followed by news on the 20th, with federal officals confirming that the train wasn’t speeding, but in fact traveling within the authorized 45 mph speed limit.

Do you or anyone else you know live in an oil train blast zone? Chances are you probably do. An estimated twenty-five million Americans live within a “blast zone,” a one mile evacuation area recommended by the US Department of Transportation.

While almost every major city across North America has rail lines running through them, our railways are designed for trains carrying people, not hazardous materials like the highly flammable, explosive — and increasingly commonplace — Bakken crude, across our cities.

A Call To Action 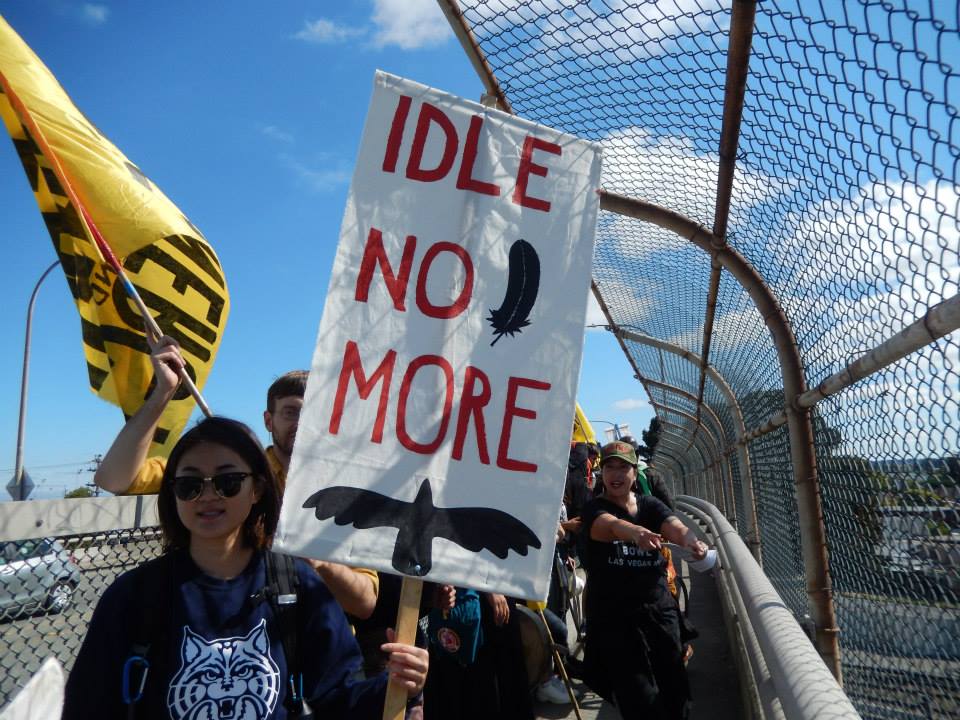 Early morning July 11, I joined Idle No More SF Bay and the Bay Area Refinery Corridor Coalition for a walk through a blast zone through the adjacent cities of Richmond and San Pablo, California. We walked six miles through neighborhoods along the railroad tracks which are within the 1 mile radius of a potential oil train explosion. We were joined by members of a variety of environmental groups, including Benicians for a Safe and Healthy Community, Asian Pacific Environmental Network, Communities for a Better Environment, and many others at a second march near Richmond’s Kinder Morgan rail terminal before arriving at a Stop Oil Trains Rally at Washington Park in Point Richmond.

Both events comprised part of the larger Stop Oil Trains week of action to call attention to the growing threat of oil trains across North America. Marking the beginning of the week, July 6 was the second anniversary of the tragic oil train catastrophe that befell Lac-Mégantic.

Locally, transportation of crude-by-rail has led to fears of a potential disaster reminiscent of Lac-Mégantic, but has also unleashed powerful community activism in the form of the Refinery Corridor Healing Walks. These walks, led by Idle No More SF Bay, aim to raise awareness of the health risks and dangers posed by five large oil refineries in the Northeast San Francisco Bay and of the crude coming in from the Alberta Tar Sands and Bakken Oil Fields.

“There is NO safe way to transport extreme tar sands and Bakken crude,” states the Stop Oil Trains call to action, backed by groups including ForestEthics, Oil Change International, Center for Biological Diversity, and 350.org. “Two years after Lac-Mégantic, oil trains keep exploding and carbon pollution keeps rising. Oil trains are a disaster for our health, our safety, and our climate.”

Crude By Rail: Our Lives Are On The Line 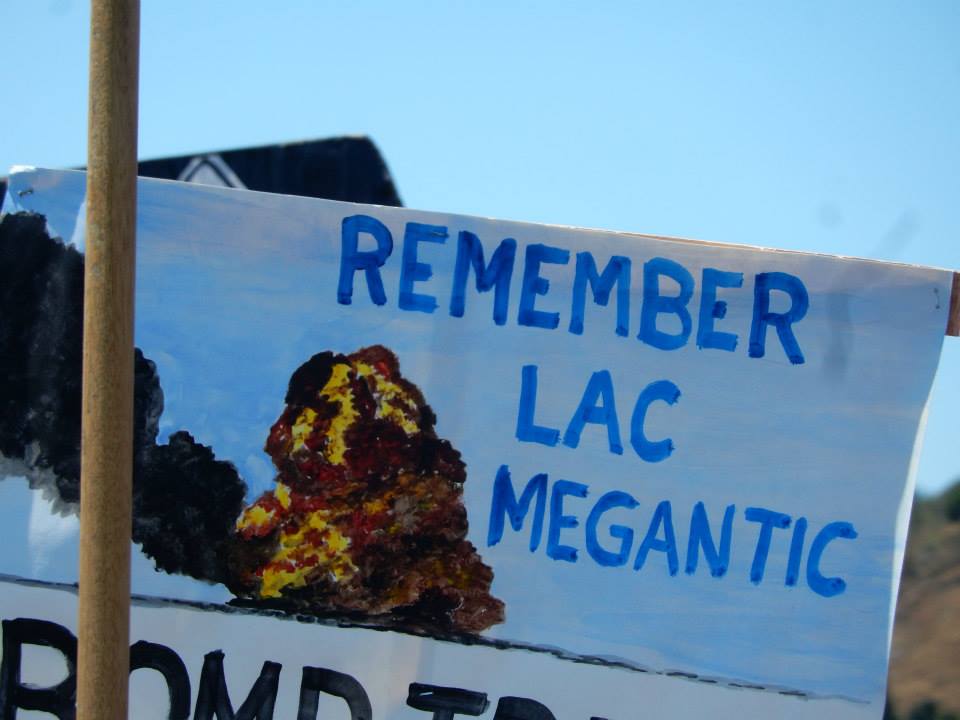 In the Bay Area, the week of action to stop so-called “bomb trains” commenced on the triple-span Benicia-Martinez Bridge, with protesters being arrested in their attempt to drop a banner reading “Stop Oil Trains Now: Are You in the Blast-Zone.org.” The Union Pacific Railroad span, which crosses the Carquinez Strait, near the Benicia Valero and Martinez Shell Oil Refineries, has been identified as a route used on the Oil Train Blast Zone map as the route used by oil trains moving through the Bay Area.

I live in the sleepy town of Benicia and the sights and sounds of passenger and freight trains rolling along the Carquinez Strait shoreline are a definitive part of my everyday experience. However, crude-by-rail spells catastrophe for both nearby residents and the local ecology of the San Francisco Bay estuary, upstream from the Pacific Ocean.

For the past few years, Benicia residents have risen up to fight back against Valero Refinery’s crude-by-rail proposal — a nationally controversial project that could turn the sensitive wetland habitat of Suisun Bay adjacent to the refinery, and the downtown cores of communities up-rail, such as that of California’s capital city, Sacramento, and the college town of Davis into fatal blast zones. 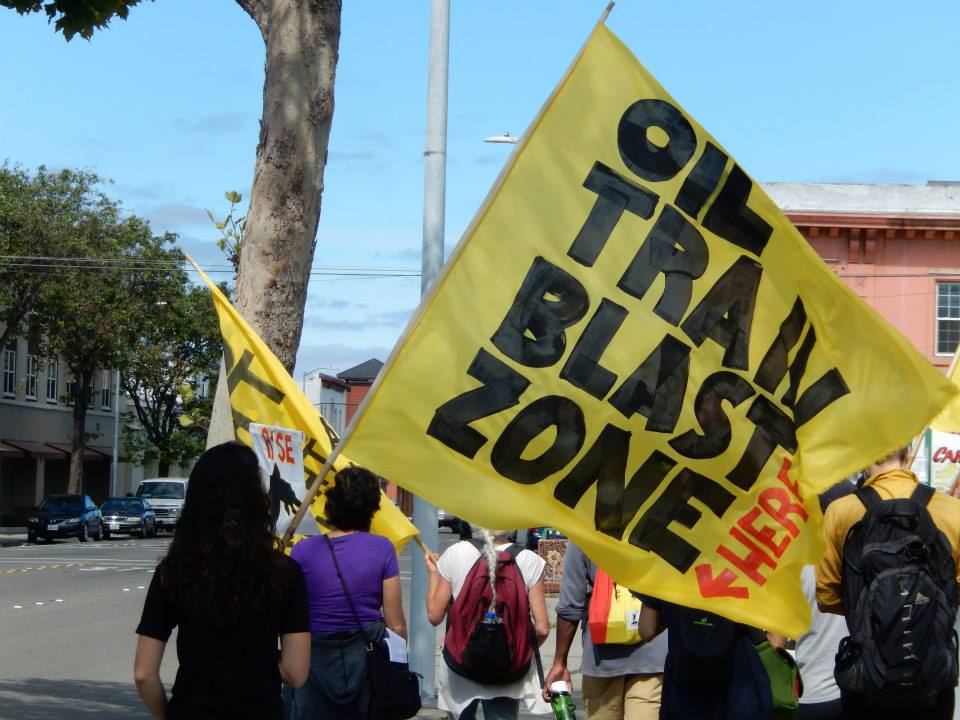 Nationwide, people living near a blast zone are overwhelmingly people of color. According to the new report, “Crude Injustice By Rails,” by Communities for a Better Environment and ForestEthics, eighty percent of Californians reside in “environmental justice” communities.

In Richmond, crude-by-rail is one of the most vivid examples of the fossil fuel industry’s blatant disregard for the climate, health, and safety of low-income communities of color. The city is on the frontlines of two major oil train fights: first, the fight to shut down the illegal Kinder Morgan oil train terminal, which was permitted behind the backs of the community, and second, the fight against the proposed Phillips 66 oil train terminal in San Luis Obispo County, which would bring an additional 2.5 million gallons of toxic, explosive tar sands oil through the city every day.

Richmond residents are also concerned about coal train dust blowing into their communities. During the blast zone walk, we caught the sight of open top rail cars in a largely Black and Latino neighborhood. 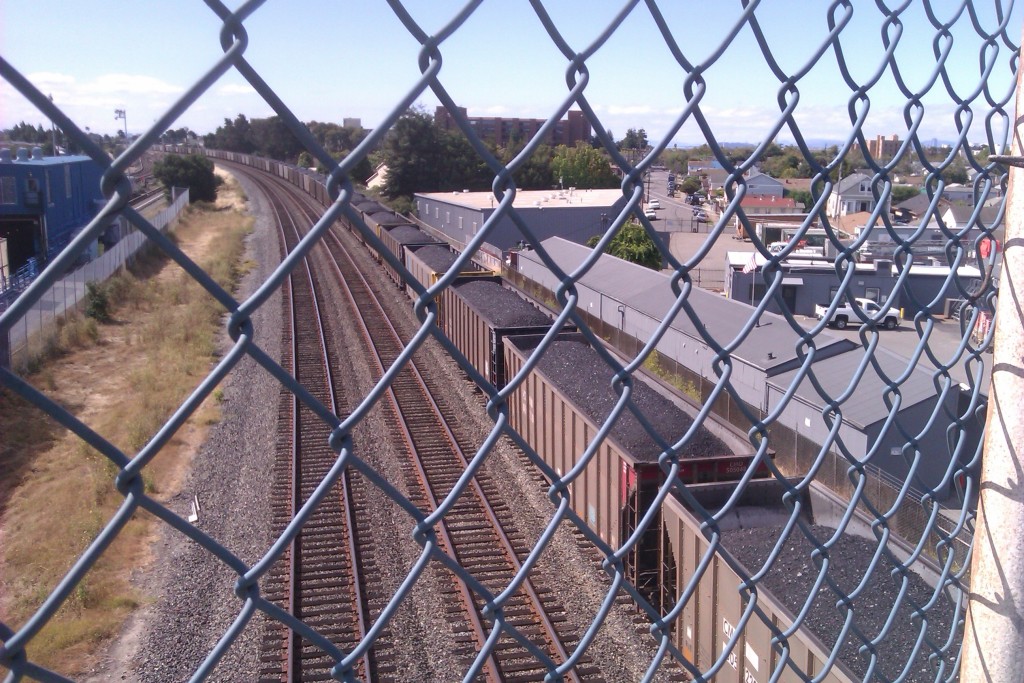 Coal dust from open top cars are a health and environmental hazard, containing toxic materials like lead, mercury, and arsenic. BNSF Railway found that “every uncovered coal car can lose between 500 pounds and one ton of coal in transit.” Where is the coal going? According to a report in KQED Science — mostly to Japan and Mexico.

Linking Our Future To The Frontlines

The week of action showed the potential of alliances that could be forged in the months and years to come with frontline communities like Richmond. A variety of groups came together on the issue of oil trains, including students and alumni who had pushed for fossil fuel divestment on their campuses.

As enunciated by the California Student Sustainability Coalition, “To these communities, divesting from fossil fuel isn’t just about re-investing prudently in the future, but about struggling to survive today.” 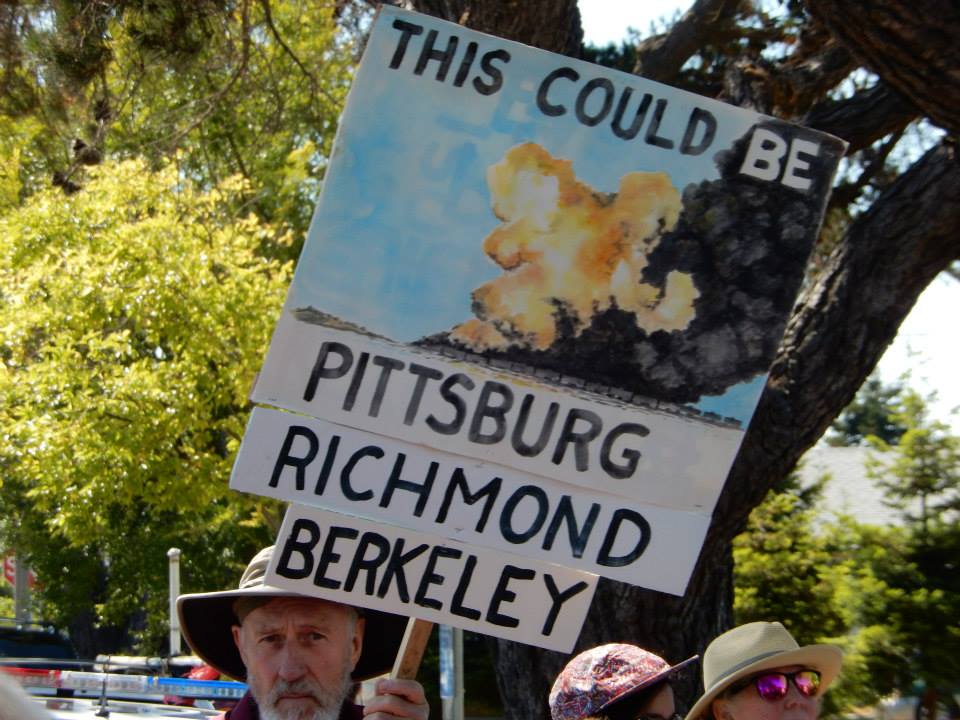 At the closing rally, a retired train worker expressed that stopping oil trains in our communities should not be reduced to a “nimby issue.” On the contrary, frontline resistance is part of a larger process in our transition away from fossil fuels — a step towards a more clean, just, and healthy future for all of us.

Learn more about this topic via our Bioneers radio show: An Oil Spill Runs Through It: Corporate Power and the Sliming of American Democracy