Journey to the Four Corners with Bioneers Indigeneity Program, DAY 1 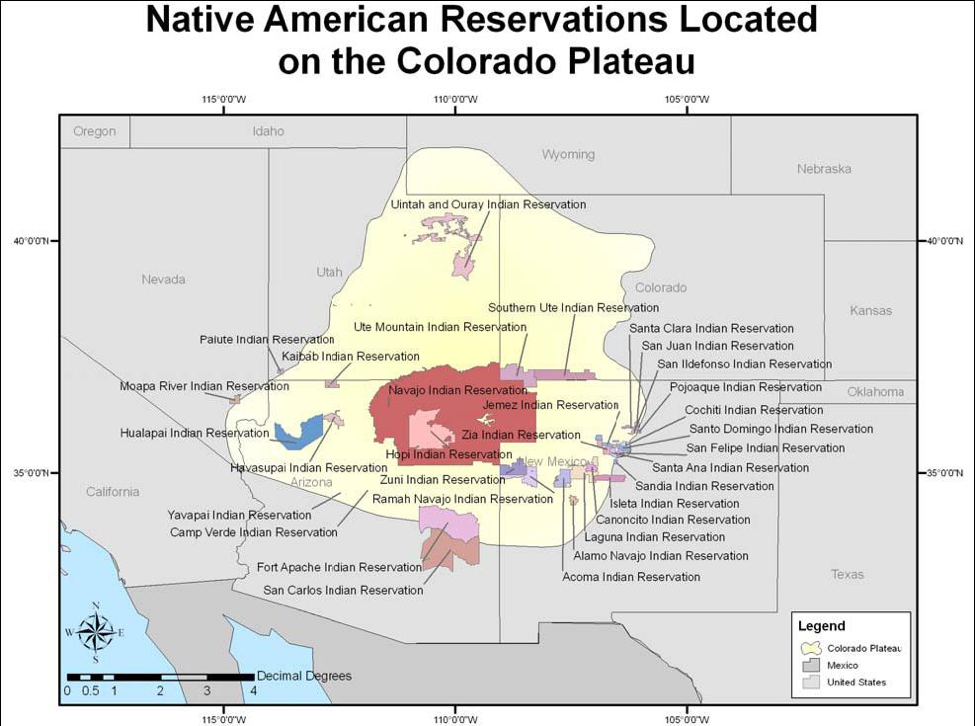 Journey to the Four Corners with Bioneers Indigeneity Program, DAY 1

The Colorado Plateau is home to several Native American tribes, including the Navajo, Hopi, Havasupai, Apache, and several Pueblo Peoples.

It all began with an invitation to Tony Skrelunas, Program Director of the Grand Canyon Trust’s Native America Program, to speak at the Bioneers Conference in 2011. Since then our relationship has grown as we have worked together to learn from and support tribal efforts across the Colorado Plateau to protect ancestral territories, restore watersheds, and revitalize community wellness through traditional ecological knowledge.

2016-17 has been a watershed year for the partnership between the Bioneers Indigeneity Program and CPIC. Bioneers co-founders, Kenny Ausubel and Nina Simons, Indigeneity Program Director, Cara Romero (Chemehuevi) and I were honored to attend the Intertribal Conversations Group Gathering hosted by Pojoaque Pueblo in November, 2016. There we joined 175 tribal members from the four corners region, who shared with us how they drew on traditional ecological knowledge to revitalize communities, fight climate change and turn sacred sites, like Bears Ears, into a protected National Monument. In March, 2016, we collaborated in CPIC’s intercultural exchange with LA area seed savers, tribal members and other key allies to share ideas about how traditional farming techniques can be used to combat climate change.

In May we came back together with CPIC members for an incredible workshop, in partnership with the Community Environmental Legal Defense Fund, to discuss bringing a Rights of Nature framework to CPIC’s grassroots work (to learn more, see their 2016 Bioneers mainstage presentation).

We were so inspired by our Colorado Plateau hosts that we invited a group of incredible allies to learn more alongside us about the groundbreaking work that CPIC members are doing on the land, and how we can bring these lessons to fruition together, in our own communities across the United States. And the Bioneers Indigeneity Journey to the Four Corners was born.

I’m writing a blog to remember who we meet, what we experience, and the lessons we will take home from the Four Corners as people from all walks of life who care deeply about taking care of nature, our planet and each other.

DAY 1: MEETING ANCIENT ORIGINS AND EACH OTHER

We all came together from across the US today to begin to immerse ourselves in the journey to come with our hosts. Some of us arrived the night before, some in the morning, and some later in the afternoon. Those of us who arrived early began to start orienting towards thinking about the deep time that makes possible traditional ecological knowledge, passed on through generations through a visit to Walnut Canyon, the ancestral home of many of the Plateau’s current tribal peoples. Walnut Canyon is a National Monument 10 miles outside of Flagstaff, our journey’s start point, in Northern Arizona. The canyon itself is a breathtaking and incredibly diverse host to plants, animals, and pueblo peoples who once lived along both sides of the canyon rim in masonry cliff dwellings, that provided past inhabitants with all food, water, medicinal and spiritual sustenance they needed. 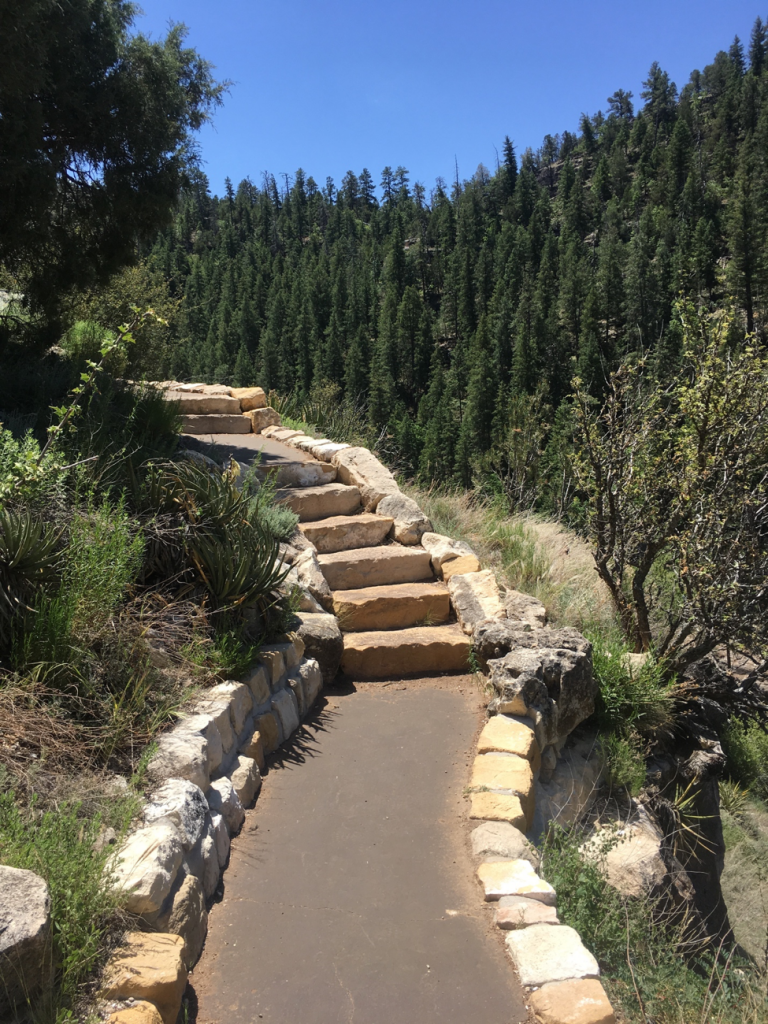 View of the pine trees coming around the north side of the trail. 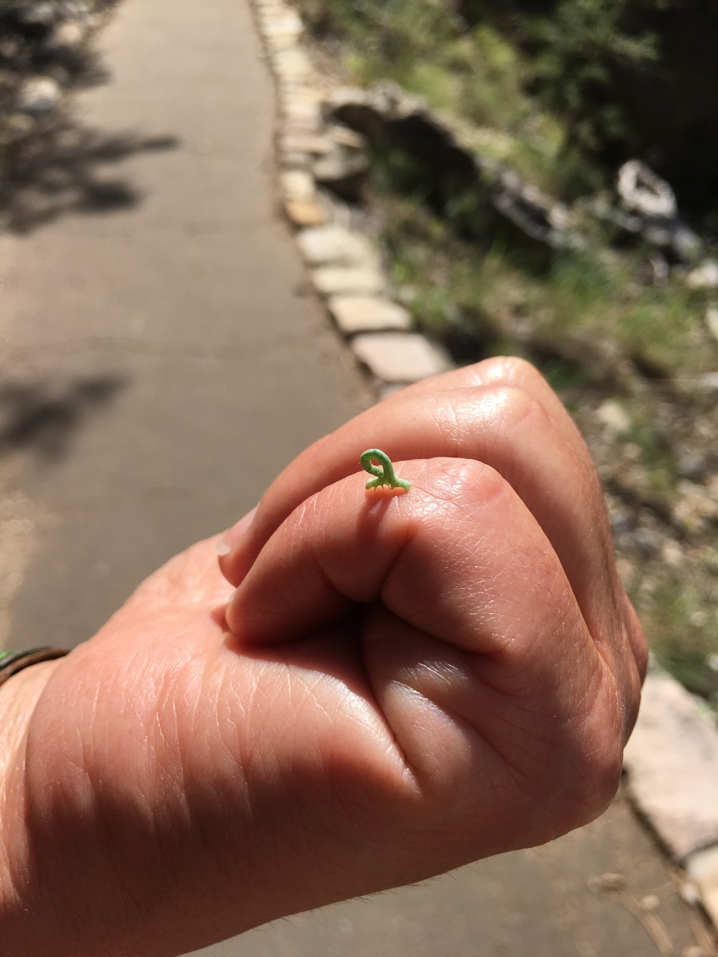 Inchworm along the trail 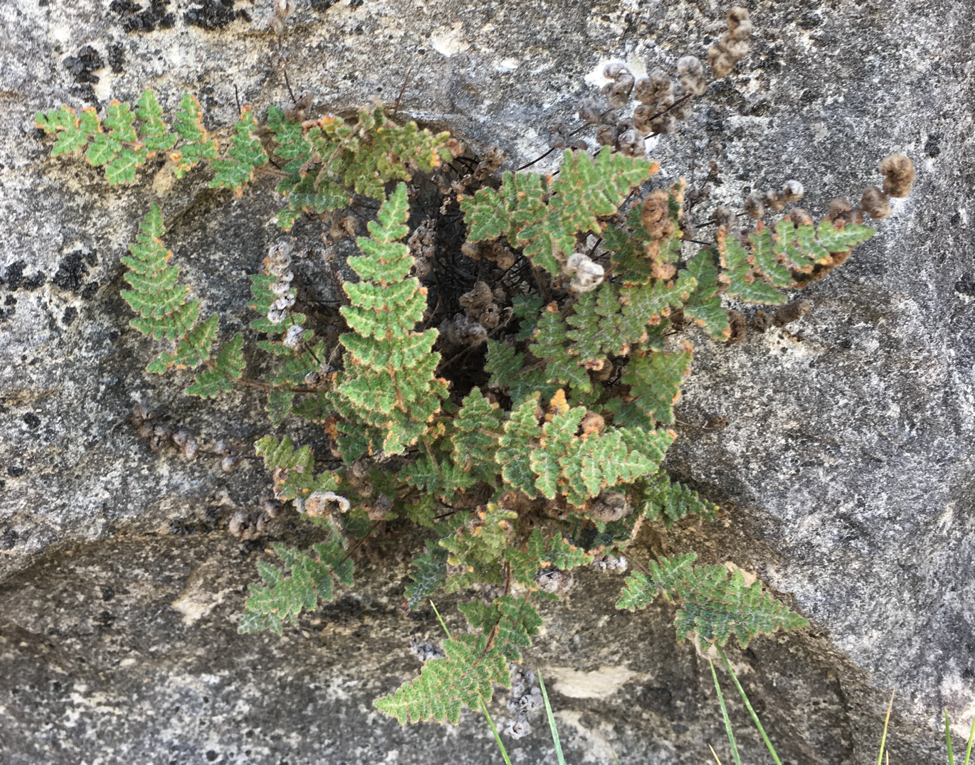 I’m always fascinated by plants that grow and thrive in seemingly inhospitable places,
like this fern growing out of the side of the rock.

Different peoples lived there at different times for well over a millennia, and we learned that over 200 cliff dwellings hosted a dense population, that swelled in size following the eruption of the Sunset Crater Volcano about a thousand years ago (click here for more National Park interpretation of the site). 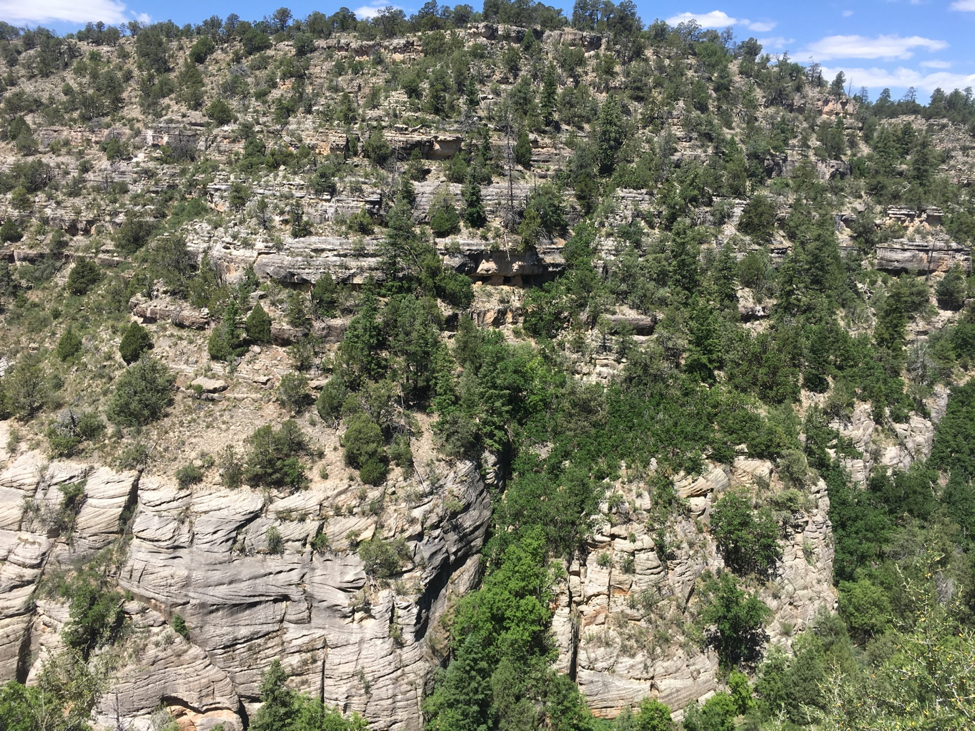 Can you see the cliff dwellings?

It is one thing to learn about ancient Pueblo Peoples’ history, and another to be able to walk in their footsteps, and to imagine what it might have been like to be a child growing up here; to run nimbly up and down 400 feet of cliffs to bring water up to the cliff homes, or as an adult to traverse up the cliffs to tend corn, bean, and squash growing on the plateau up above. The dry farming techniques, which have been perfected over thousands of years, were practiced here, as they still are today, with the same ancestral seed stocks, perfectly adapted to their place, on the plateau (we’ll be learning more about that later.)
I also thought about how the canyon served as an ideal place to protect families from conflict and to watch for enemies. I reflected upon how safe and sustaining a home here would have been. 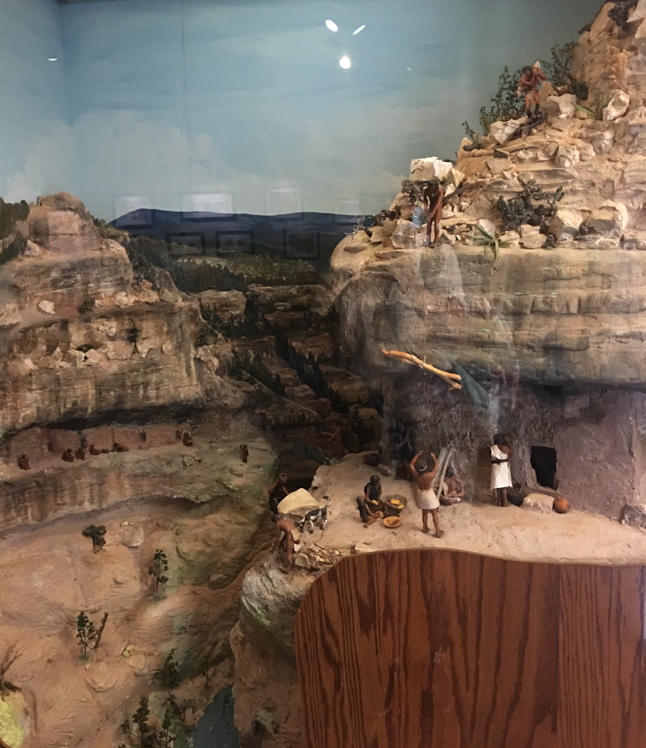 Dioramas can be controversial in the ethics of interpretation for their role in perpetuating myths and stereotypes, but I liked this one, because it really gave me a sense of life in the canyon at a certain point in time. 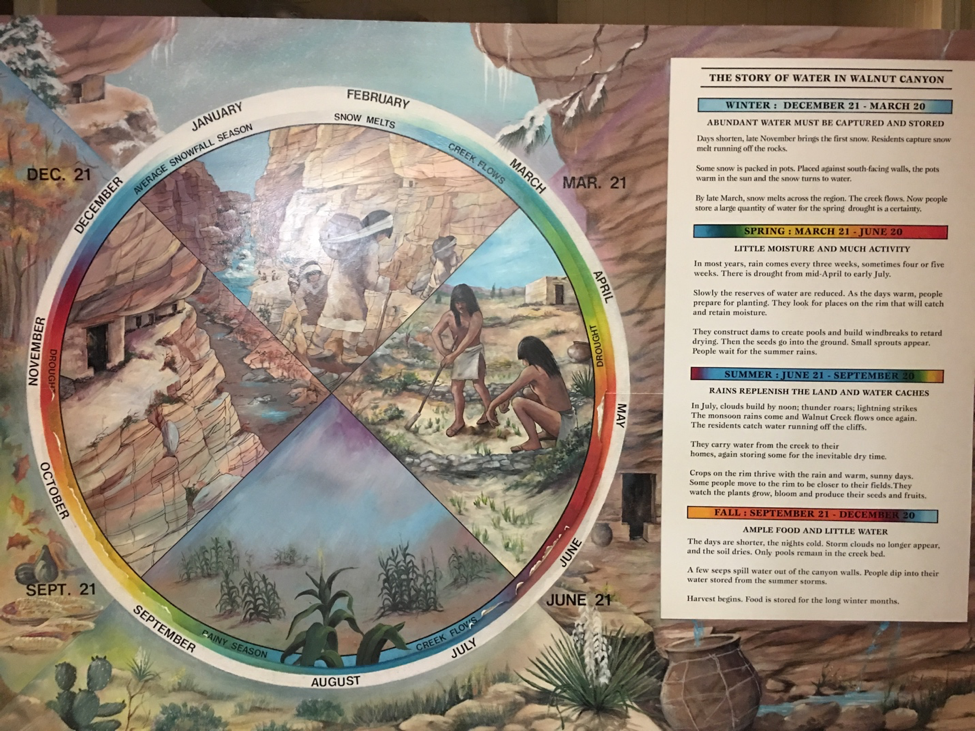 This excellent display of the seasonal cycle gave me a fuller understanding of what life was like in the canyon. 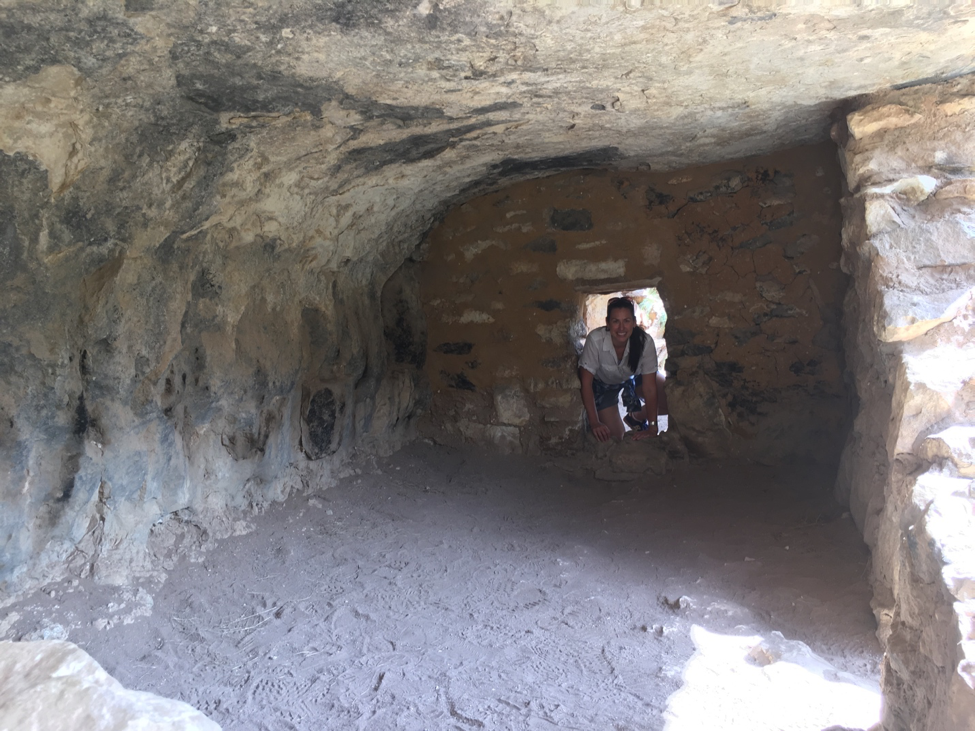 Imagining first-hand what it must have been like to live in a cliff home.

The only thing I really missed during our mini-kickoff excursion was our local partners from the CPIC, because we had so many questions, only some of which could be answered through our guesswork and park interpretation, since our journey had not officially started yet. While they couldn’t answer our questions from an Indigenous perspective, the Walnut Canyon Park staff and volunteers were incredibly informative, knowledgeable and friendly. 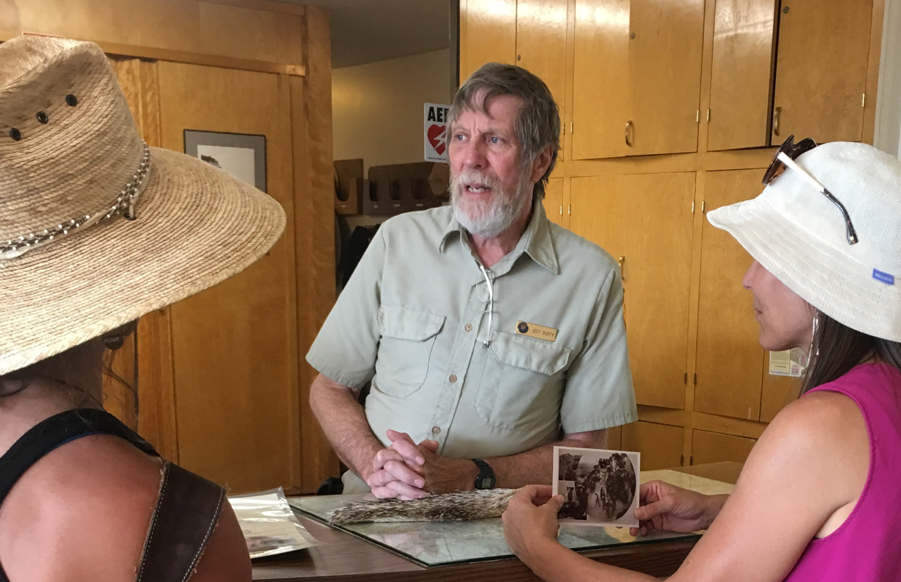 I was baffled by this javelina pelt, but learned a lot about the ecosystem from the great interpretation.

We returned to our hotel, and met up with our friends, old and new, to officially kick off our journey with a welcome meal, where we made introductions. 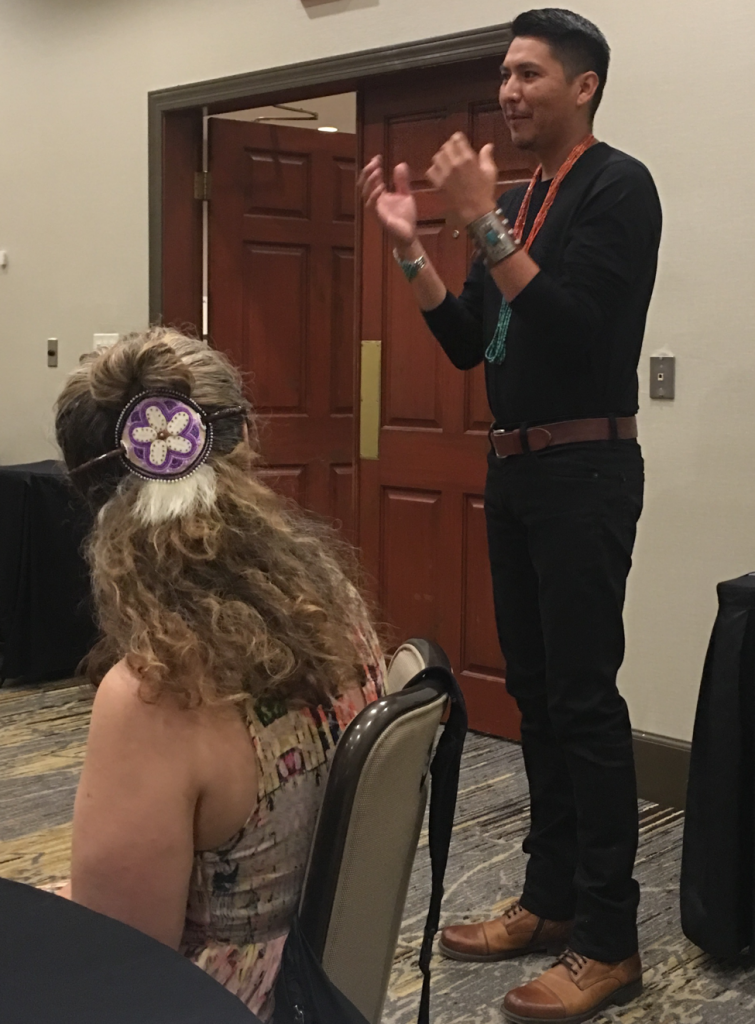 Deon Ben, our partner with the CPIC introducing himself to the group at our opening dinner.

Each of us were moved by the profound connections we had with each other.We went around the dinner table, sharing experiences and feelings, where each of us came from, what’s important to us, and what brought us to be together. Even though the dinner ran late on a busy travel day, we were all so excited to wake up the next morning for an epic trip to the East Entrance of the Grand Canyon, the Navajo side, through the eyes of our local Diné hosts. I was so excited for the first day of our journey together that I had trouble sleeping.

–The Indigeneity Team, Cara and Alexis 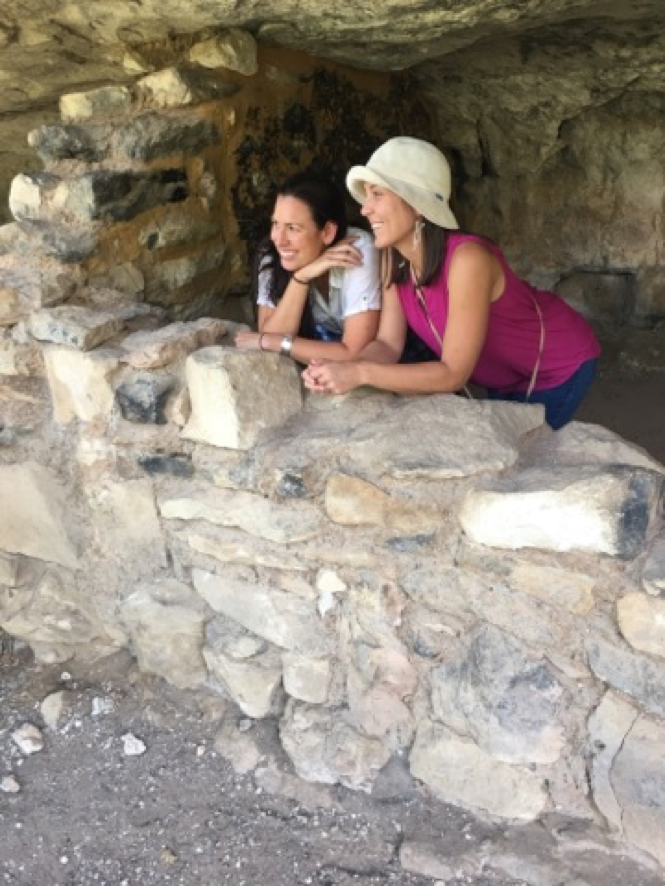