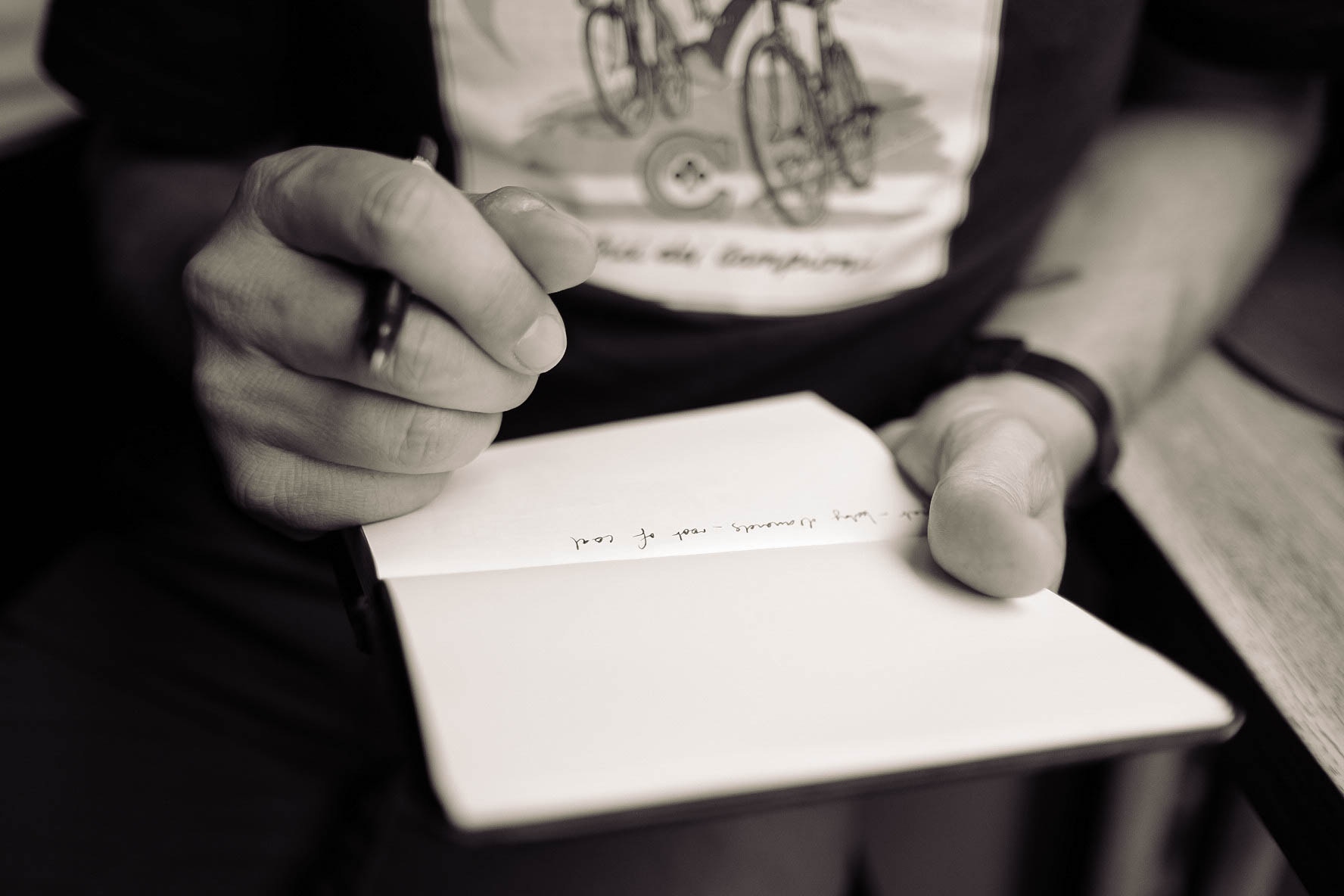 Amy Goodman tells the story of reporting from a refugee camp, and discusses the ways in which her independent media organization, Democracy Now!, endeavors to ask the tough questions and change history. In 1996, Democracy Now!—a well-known independent radio and television program—began telling stories the mainstream media overlooked. With award-winning journalist Amy Goodman at the helm, the nonprofit organization has grown to become the United States’ largest collaboration of public media, currently broadcast on more than 1,400 stations. Democracy Now!’s programming has covered wars, economic catastrophes, environmental degradation, and social movements, and its hosts, Goodman and Juan Gonzalez, have become trusted voices within a mass-media cacophony. Bioneers has been honored to host Goodman on our stage over the years, and we look forward to her appearance at the 2017 conference.

The independent media organization’s self-titled book, Democracy Now! (Simon & Schuster, 2017), recounts 20 years of groundbreaking storytelling through Goodman’s lens. The book’s first chapter, “The War and Peace Report,” is a deep-dive into the violence—and consequences thereof—witnessed and reported on by Democracy Now! journalists. The following is an excerpt from that chapter.

Endless wars have now spawned the largest migration of human beings since World War II. Europe has been the first stop for this wave of humanity.

In December 2015, my Democracy Now! colleagues and I visited a massive, makeshift refugee camp called “The Jungle” on the outskirts of the northern French town of Calais. The camp grows daily, swelling with asylum-seekers fleeing war in Afghanistan, Syria, Iraq, Sudan, and beyond. Their countries of origin are a map of the targets of US bombing campaigns. More than six thousand people in this, France’s largest refugee camp, hope for a chance to make the last, dangerous leg of their journey through the nearby Channel Tunnel to England. Wind whips off the North Sea, blasting the shelters made of tarps, tents, plastic sheeting, and scrap lumber in this sprawling, ramshackle end of the line. The roads in the camp are muddy; the portable toilets are filthy. The charity health clinic had been closed since mid-November. The main entrance to the camp is below a freeway, with several police vans parked with lights flashing and armed officers stationed above.

Most who arrive here have endured arduous journeys of thousands of miles, hoping to cross to the United Kingdom. The Channel Tunnel offers asylum-seekers a way to make it to the UK without risking a dangerous crossing of the English Channel, by stowing away on either a high-speed passenger train or a freight train. Accessing either type of train involves significant risk, and accidental deaths occur almost weekly when people leap onto moving trains or stumble under truck tires.

A few days before Democracy Now! visited the camp, a Sudanese man named Joseph was killed when he was run over by a car on the highway. Camp residents were protesting that the police had not stopped the driver, holding signs reading “We are Humans, Not Dogs” and “Do survivors of war not have the right to live in peace?” We asked a young man named Majd from Damascus, Syria, why he fled his country: “I escaped from the war. I don’t want to die. This war is not my war.” We asked him who was attacking his country. He said: “Who? Everyone. Russia and America and Iran—everyone.”

Days before we met Majd, the British Parliament voted to attack Syria and began bombing immediately. In the few months prior, the British government built multiple layers of high, razor-wire-topped fences in Calais, sealing off the tunnel entrance and the rail line for miles before the tunnel, as well as the staging area where freight trucks line up to drive onto the rail cars that will carry them through the tunnel. Each truck is also subjected to an infrared scan to look for stowaways. Before the enhanced security, scores of asylum-seekers might get through the tunnel nightly. Now, it is almost impossible. The more the West bombs their countries, the more it shuts out those who flee its wars.

In the Afghan section of the refugee camp, Sidiq Husain Khil was eager to speak about the fourteen-year-old US war in Afghanistan—the longest war in US history. Like many, he did not want his face to be filmed. We asked him about the effects of US bombing and drone strikes on Afghanistan. He replied: “If they are killing one person or ten persons, one hundred of them are joining the group of Taliban…. The war is not the solution for finishing terrorism. They have to talk face-to-face.”

As we roamed the camp, pulling our coats tightly around us in the cold, we looked for a woman who would be willing to speak. We met Dur, an Afghan professor of English, who also did not want her face shown. She traveled more than three thousand miles with her four children, by car, bus, horse, foot, and boat. In almost perfect English, her twelve-year-old daughter described their unimaginable route: “First we go to Nimruz province of Afghanistan. Then we went to Pakistan. Then we walked to Saravan, Balochistan. Then Iranshahr, Kerman, Shiraz, Tehran, Kurdistan, and Turkey. Then we start walking in mountains. Then we went to Istanbul, Izmir. Then we arrived to the sea.” Dur hired a smuggler to take them in a leaky boat from Turkey to Greece. She told me, “When I saw that boat… I called all my children and I start to cry… I spent all my money to buy them death.” Miraculously, they survived. Whether they make it to their destination, Britain, is another question.

As we left the camp, a man named Najibullah raced up to us. An Afghan who worked with the US Marines as a translator, he applied for a special visa for Afghans who put themselves at risk by working for the United States. He said he was turned down because he hadn’t worked for the marines for a full year. “Working with the US government… just one day or a year… it doesn’t matter to the Taliban,” he told me. “As long as you work with them just one hour, you’re condemned to death.”

“Today, Joseph. Tomorrow, who?” read one of the many signs at the protest earlier that day. These refugees are the roadkill of war.

A few days after we left the camp, a painting appeared on the concrete wall of the underpass, where the protest had occurred. It was painted by the globally renowned street artist Banksy, whose identity has never been revealed. Banksy painted a life-size depiction of Steve Jobs, the visionary founder of Apple, with a bag slung over his shoulders. Banksy released a statement to accompany the painting of Jobs: 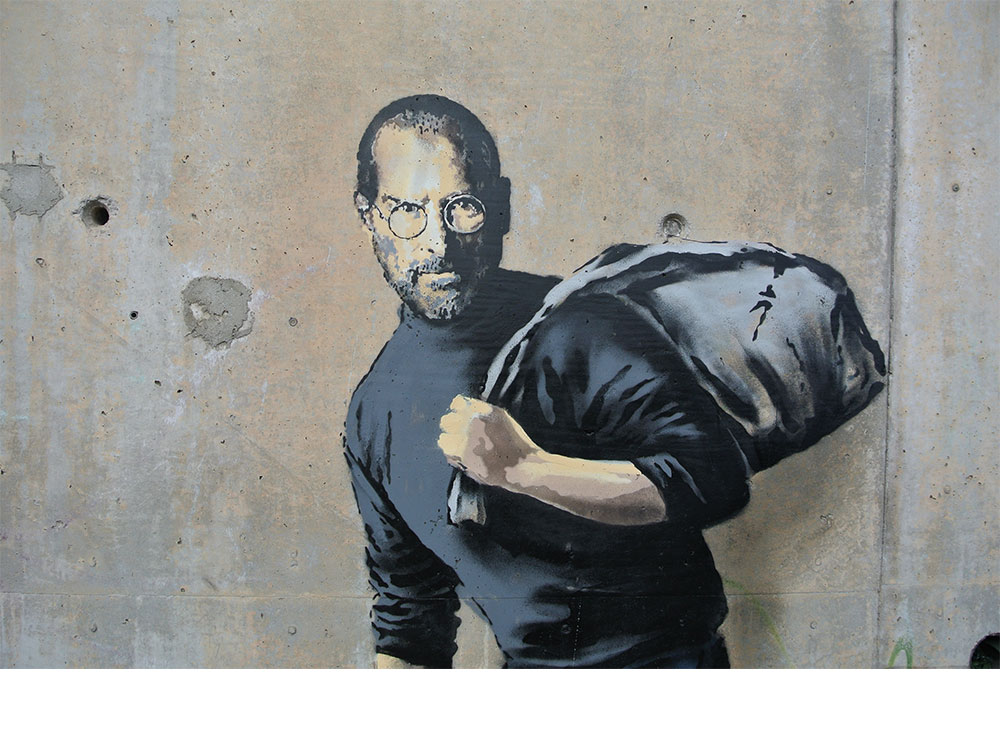 “We’re often led to believe migration is a drain on the country’s resources but Steve Jobs was the son of a Syrian migrant. Apple is the world’s most profitable company, it pays over $7 billion a year in taxes—and it only exists because they allowed in a young man from Homs.”

Working for peace is among the most important and noble of human endeavors. Individuals might feel powerless when confronted with a nation intent on going to war, but history shows that movements matter; that small acts of defiance and dissent can ripple out and create change. Noam Chomsky is a Massachusetts Institute of Technology professor emeritus of linguistics, a field of science that he revolutionized. He is perhaps best known, though, as one of the world’s most prolific analysts of US foreign policy. He has authored over a hundred books and still, in his late eighties, is a tireless writer and speaker on issues of war and peace. In the early 1990s, Chomsky wrote an essay called “What You Can Do,” which reads in part,

One of the things [people in power] want is a passive, quiescent population. So one of the things that you can do to make life uncomfortable for them is not be passive and quiescent. There are lots of ways of doing that. Even just asking questions can have an important effect. Demonstrations, writing letters and voting can all be meaningful—it depends on the situation. But the main point is—it’s got to be sustained and organized. If you go to one demonstration and then go home, that’s something, but the people in power can live with that. What they can’t live with is sustained pressure that keeps building, organizations that keep doing things, people who keep learning lessons from the last time and doing it better the next time.

Covering social movements like those Chomsky was writing about, reporting on efforts to effect lasting change—the movements that make history—that is our daily labor at Democracy Now! The global protest on February 15, 2003, didn’t stop the invasion of Iraq. We can’t know for sure what impact it had, or continues to have, as the demands of those thirty million marchers continue to reverberate. Thousands of individuals and groups around the world continue to work for peace, each contributing a small share to what Martin Luther King Jr. called, in his “Beyond Vietnam” speech, “the long and bitter, but beautiful, struggle for a new world.”

This excerpt has been reprinted with permission from Democracy Now!: Twenty Years Covering the Movements Changing America by Amy Goodman, published by Simon & Schuster, 2017.

Watch a video of Amy Goodman’s 2006 Bioneers conference talk below, and check out her 2017 speaker page for more on her involvement in our upcoming conference.