Excerpted from an Interview with Calla Rose Ostrander

Calla Rose Ostrander is an environmental consultant to the Marin Carbon Project, and formerly Climate Change Coordinator for the city of Aspen and Climate Change Project Manager for San Francisco.

When I was the Climate Change Project Manager for the City of San Francisco, John Wick gave a presentation in the Office of the Department of Environment on how the Marin Carbon Project (which John co-founded) was working to promote farming practices that draw carbon from the atmosphere and capture it in the soil. He shared his rigorous peer-reviewed published papers and a carbon-offset protocol that he had created around the concept of soil carbon sequestration. It included a whole methodology for farming that fit into the existing USDA infrastructure. I had never seen anybody do their homework quite like that. He had designed the pieces to transition the entire agricultural system. The research and trials had been done and he had found the framework in which to embed it into the agricultural system: the USDA’s Natural Resources Conservation Service and California’s Resource Conservation Districts. 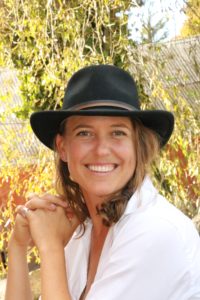 That meeting led to an invitation to work with the Carbon Cycle Institute. They had a system, they did the science, they involved the right government institutions and the right stakeholders, and were supporting the farmers. There was an ecosystem of organizations and individuals to help scale it up. I was able to come in and help take all of that out to the broader landscape.

My background is international political economy, which is how you understand the levers of modern Western society, how politics intersect with economics, and how culture, religion or science – or whatever your basis is – shapes politics. As a political economist, my job is to assess things like the need for a market policy to drive organic materials out of landfills and out of dairy ponds and into compost.

The challenge is that the current economic framework doesn’t recognize the exchange of energy as inherently valuable. When exchanged in a positive way, there is an abundance of carbon within the terrestrial system. It challenges the idea that the scarcity of carbon is what creates its value. Carbon is one of the most abundant elements on the planet and is what life is built on–that is the basis of its value.

We’re not going to change the economic paradigm tomorrow, but we are trying to look at all the ways in which our socio-political and market-based culture creates value, and then help shape it so we can begin to move that energy exchange in a positive abundant direction instead of in a single direction–into the atmosphere. Carbon is an untapped resource that can be actively harnessed if humans take a responsible role in the carbon cycle.

To affect policy change, consistency is needed across the scientific models between the State of California and the USDA, which requires additional research. Once we get consistency, the state and the feds are going to accept the models and then programs can be brought online.

In order to get funding passed, we need legislators from Southern California because the leaders of our California government are primarily based in Los Angeles. I moved there to understand who the constituency is, what they care about, how we engage them, how the idea of Carbon Farming and carbon sequestration brings value to them, and then how to mobilize them to tell their representatives that it is important.

How we, as a movement, communicate to the outside world needs to be cohesive. Kiss the Ground wanted to make a movie about soil and climate change. We needed to make sure that that first story animation said the things that everybody in the movement agreed on, that we got the science right, that we didn’t overstep it, that we said things that everybody from my scientist to my advocates and my politicians could agree with. Once we’re all saying the same thing, we then have shared values and the language needs to communicate that. Working with Kiss the Ground to write the movie created vocabulary cohesion, and therefore helped to align political and social will, which is crucial to take the body of work to scale.

The Marin Carbon Project and The Carbon Cycle Institute looked at all the practices currently in Conservation Agriculture that focus on carbon and enhancing terrestrial or soil carbon. Instead of a Conservation Plan they created a Carbon Farm Plan that puts carbon at the center, because when you manage for carbon, you manage for water, you manage for nutrients, you manage for productivity and energy. That’s why it is a replicable model.

There are approximately 33 Resource Conservation Districts (RCD) in the State of California that have Carbon Farm Planning programs, meaning a rancher or farmer could go to their RCD and get assistance designing a carbon farming plan. Having a Carbon Farm Plan makes farmers and ranchers eligible for existing subsidies through the USDA Resource Conservation Service as well as California’s Healthy Soils Initiative.

Most agricultural soil systems are highly degraded and impacted and are facing challenges from extreme weather. Ranchers or rangeland managers don’t have a lot of capital. These are systems that operate on very small margins and they’re challenged by increasing land prices. They stay on the land by working it.

Even though a one-time application of compost is like magical medicine for the soil, compost is expensive and we’re going to need a lot more of it. The price needs to come down on one side for the rancher, but probably needs to go up for the producer to be profitable. Subsidies and more ways of farmers producing their compost on farm are needed.

To be successful means getting enough carbon back in that soil system so that it can be highly productive, and that’s not just compost. There are 34 practices “officially” approved by USDA and there are hundreds of other conservation practices for natural resource conservation and improving soil health. Those that specifically increase soil carbon sequestration are the ones that we put together into the Carbon Farming Plan. Colorado State University (a key partner in the development of the EPA’s Greenhouse Gas Inventory protocols) and the USDA are using the tool that we created for California, the COMET-Planner, which evaluates potential carbon sequestration and greenhouse gas reductions by adopting NRCS conservation practices. It’s also being applied internationally.

A lot of farmers and ranchers are already doing many of these practices. They need monetary and technical support to manage for carbon on their properties.

In addition to government subsidies, private sector investment is needed. Local infrastructure is really important for supply chain development and keeping the value closer to the farmer. Right now, most of the wool that’s produced in California–even though it’s some of the highest-grade quality­­–gets thrown away because there’s no way to bring it to market. You have to send it to Texas or China to get washed and then there is the problem of where to send it once it’s washed to get spun or milled, and how to make the fabric. What we’re doing now is looking at how we can support a manufacturing infrastructure around local fiber systems that are climate beneficial, because that’s going to bring a value back to the farmer or rancher and value to the soil by building organic matter.

Fibershed founder, Rebecca Burgess, has built a community in California of over 140 small to mid-scale producers and is working with North Face by producing value-added products with wool that was produced in a climate-beneficial manner using Carbon Farming practices. We’re looking at what is it that those local producers need in order to successfully make these practices happen on their operations.

There are wonderful organizations that we’ve partnered with – CAFF, CalCAN, Californians Against Waste­ – who are doing advocacy. What was missing was the smaller, mid-scale producer voice at the table. We are helping those types of producers organize and have their own lobbyists because in order to get government money, you have to show up at every meeting and every hearing, and go to the offices and talk to all the people. That’s how policy gets made, that’s how money gets distributed. You’ve have to know who your legislators are and talk to them. John Wick is currently funding a project to connect the small-scale Northern California climate beneficial producers to a lobbying group that can represent them so that they can have a voice at the table.

There’s a framework, there are funding streams, and now it’s a question of listening to people who are already doing this work as well as those who are interested. What do they need to continue or what they need to do more of it? A model is in place that can live on its own within existing infrastructure. New resources like education and more funding can be funneled towards that infrastructure. There are structural things that still need to be changed, but the model is active, right now, on the agriculture landscape in California.