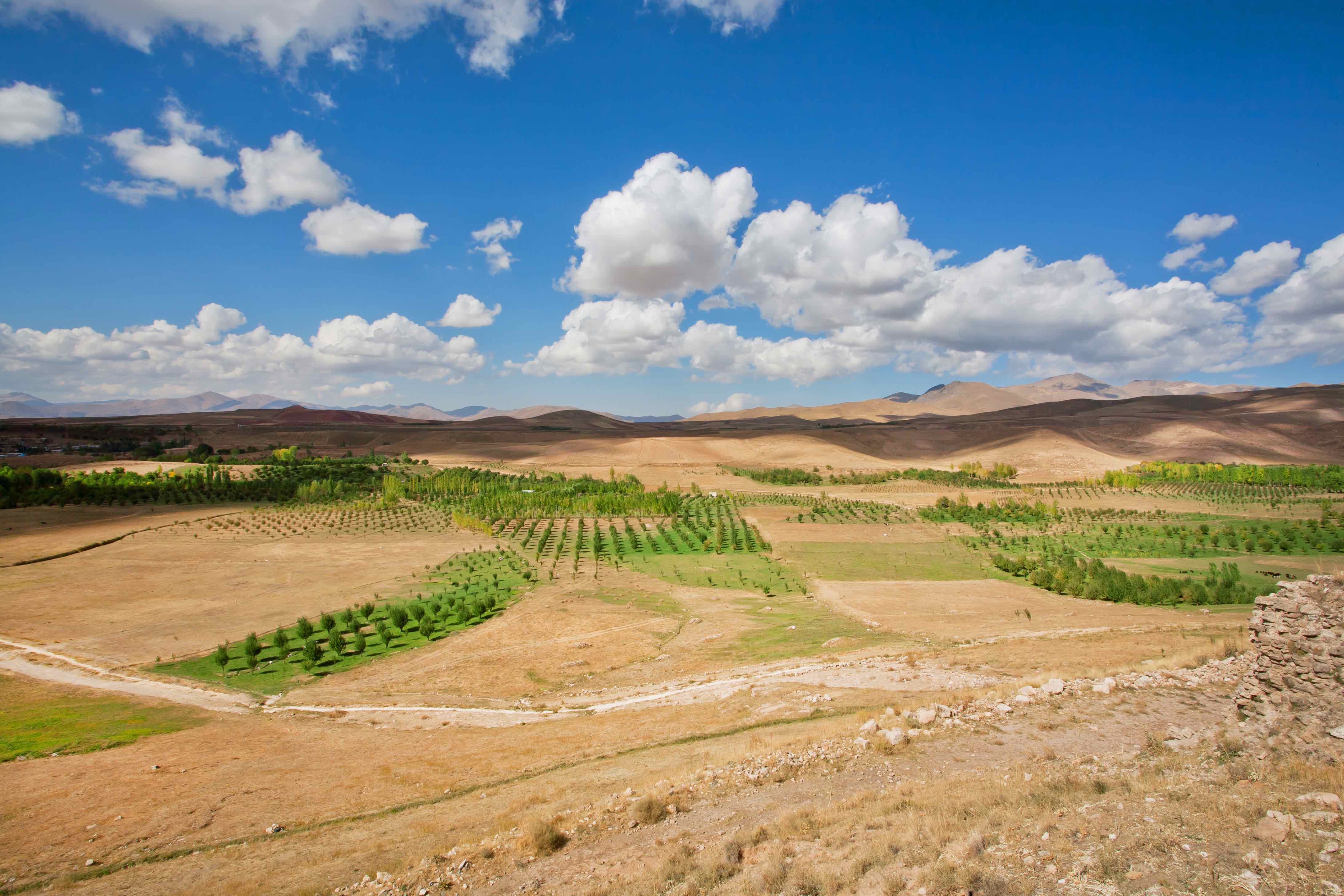 Mark Schapiro is an award-winning environmental investigative journalist whose work has appeared in Harper’s, The Nation, Mother Jones, and The Atlantic Monthly. He is the author of Seeds of Resistance: The Fight for Our Food Supply.

In this transcribed excerpt from his presentation at the 2018 Bioneers Conference, Mark tells a truly fascinating story that weaves together American foreign policy, agricultural heritage harkening back to the birth of western civilization and how an Italian seed breeder working for the United Nations in the Middle East managed to shepherd a refugee seed collection through two wars in hopes of preserving an ancient genetic treasure that could help farmers adapt to climate change.

When thinking about seeds, it’s important to understand the convergence of a couple of different events. First, we have a very powerful convergence of control over the seed industry. Three companies, all of which are chemical companies, now control over half of all commercially traded seeds. Secondly, you have very dramatic changes happening in the conditions for growing food, which are challenging the current model of agriculture.

In my previous book Carbon Shock, I wrote about climate change and all the ways in which it is putting pressure on our economy, our political systems, and the way we understand resources. I learned, from farmers in the Central Valley of California and all over the world, how conditions were changing from the way that farmers had grown up thinking they would be. Both organic farmers and conventional farmers are experiencing very profound change.

One of the questions that I wanted to ask as a journalist was, “What do those profound changes mean for the types of seeds that people use? And what do those changes mean at a time when the consolidation is increasing and a movement in response to that consolidation is also expanding rapidly.” I tried, in my book, to tell stories about the people that are involved in this struggle that is underway, and how this plays out for people all over the world.

War Zone in the Birthplace of Agriculture

Following the 2003 invasion of Iraq, the city of Abu Ghraib became infamous as the location of the prison where horrible things were done by American soldiers to Iraqi prisoners. Prior to 2003, Abu Ghraib was renowned for being the host to an extremely important seed bank that collected seeds from all over that region. Iraq is the center of the fertile crescent and Abu Ghraib is located in the great Delta, the meeting of the Tigris and Euphrates Rivers, which was the birthplace of domesticated agriculture. Seeds that have been planted for many, many centuries began their journey into our ecosystem in the Delta of the Tigris and Euphrates Rivers, which means these seeds in Abu Ghraib were some of the most ancient domesticated seeds on the planet.

The conditions in that part of Iraq and the Middle East are hot and dry, which means that the seeds that have grown up there have become tolerant to extreme levels of heat and extreme levels of drought. Even during the crazy realm of Saddam Hussein, scientists would come from all over the world to study these seeds, and in some cases, bring them back to their home regions. It was a fantastic center for exchanging seeds.

In April 2003, American troops rolled into Iraq and made their way pretty quickly to Baghdad. As the fighting got more and more intense around Baghdad, the seed bank was hit by a random rocket – it’s unclear whether it was an American rocket or rocket from the Iraqi defenders – and the seed bank was rattled and almost destroyed.

A group of Iraqi scientists went into that seed bank and salvaged whatever seeds they could, threw them into a van and raced them across the border to safety in Syria. They drove the van to a small town called Tal Hadya, which is about 15 miles from Aleppo. In Tal Hadya there is a seed research center called the International Center for Agricultural Research in the Dry Areas (ICARDA). ICARDA, one of the UN’s network of seed research institutions, welcomed the refugee seeds. Some of the staff from ICARDA were familiar with these plants because they spent time training people in Iraq. There had been active exchanges between Tal Hadya and Abu Ghraib. Seeds from Abu Ghraib had been planted and were also preserved in the vault at ICARDA.

Growing a Mix of Seed Varieties

There they grew out many different seed varieties – millet, barley, wheat, numerous varieties of beans, peas, etc. Anyone familiar with the foods of the Middle East knows how much diversity there is and how much tasty food there is, much of which emanates originally from multiple thousands of years ago in the region.

Nobody was paying attention to the ICARDA facility 10-20 years ago. It was just another agricultural institution for dry regions. But now the climate of many places is becoming more like those hot dry areas; large parts of the United States, as well as other parts of the world, resemble the Middle East. The seed bank outside of Aleppo had become an extremely important institution.

For about 10 years the Iraqi seeds were grown out – the whole mix of different related varieties together – at the Syrian seed bank. Syrian farmers traditionally grow wheat with multiple varieties in the same field.

Then war came to Syria. There are many different tensions that contributed to the war, but one was related to agriculture. By 2010, the Syrian government was pursuing an effort to consolidate farms into larger and larger operations that used more uniform seeds. Then a drought hit. The newer uniform seeds were much less responsive to drought than the traditional seeds may have been. The drought decimated the farmer’s crops. There were multiple causes that led to the tensions in Syria, but that is one factor that I’ve seen convincingly argued.

Aleppo was a redoubt of the rebels for many years, and was one of the strongest centers of resistance in a horrible civil war that has been tearing Syria apart. So the rebels took control of the seed bank.

I talked to scientists who were there at that time. The rebel commander who took control of the area around Tal Hadya, just 15 miles from Aleppo, was a farmer. He understood exactly the importance of this seed bank, and he struck a deal with the scientists. He said, “We’ll keep your electricity going and we’ll get you diesel to run the tractors so you can keep growing your plants, I just want you to provide food to help feed the troops.” The UN had lost control of the area, so it was the rebels and the scientists who cut a deal.

That deal lasted until the fall of 2016, when the government forces of Bashar Assad launched attacks on Aleppo. They were horrible and brutal. There were barrel bombs. Many, many innocent people were killed during that time period.

As the war came closer and closer to Tal Hadya, the electricity started failing. So, a group of scientists bundled a whole bunch of seeds from the Tal Hadya seed bank into a van and raced them across the border into Lebanon, where they are being grown out today in the Bekaa Valley, which is controlled by Hezbollah who are completely cool with this enterprise. The scientists affiliated with the UN are now going in and out of this area and trying to keep those seeds from Syria and Iraq alive. The efforts by those scientists to save the seeds illustrates how important the world perceives these seeds to be.

Saving the Seeds, Continuing the Experiment

Italian scientist, Salvatore Ceccarelli, an ingenious seed breeding pioneer who worked for 25 years at the seed bank outside of Aleppo, took two 20 kilo sacks of wheat seeds that he was responsible for, put them on an airplane and took them to Italy. The seeds in the sacks were a mix of several different varieties. He turned them over to a rural seed NGO in Italy, which then dispersed them to several farmers in Tuscany and Sicily.

What does it mean to grow out a population of seeds? The broad genetics of the different varieties gives the whole mix a greater resilience to varying and extreme weather conditions. Italy has been undergoing a severe drought and severe rise in temperatures, causing extreme stress on commercial wheat and creating a serious crisis in the pasta industry. This mixed population of seeds grown together is evolving over several years and is producing very hardy wheat crops.

It is a fascinating experiment. The Tuscany wheat produces a higher yield than the Sicily wheat because there’s more rain in Tuscany. Both are being called the Aleppo mix in recognition of where these seeds came from.

But the only seeds you can legally sell in the market in Europe and in the United States are seeds that are single varieties, one type of seed that’s repetitive and that guarantees that it will essentially reproduce the same plant characteristics over multiple generations. In contrast, the seed mix evolves and adapts to changing conditions.

While Ceccarelli was doing this experiment, a coalition of agricultural groups lobbied the European Union in Brussels. Based on scientific arguments, they convinced the European Union to wave a set of laws that require that seeds be of a single variety allowing this population of wheat seeds, as well as some barley and millet, to be grown.

The highly successful experiment ran for about five years in Italy until it ended in December of 2018. The thesis of the experiment is that breeding multiple varieties of seeds with a broad range of genetics in the same field leads to crops that are able to respond to a broad set of environmental conditions. Ceccarelli’s argument is that this approach is the best way for farmers to respond to climatic changes.

Editors Note: Our deepest thanks to Mark Shapiro for telling this story at Bioneers – and, as usual, it doesn’t stop here. Learn more about a project in the US inspired by Dr. Ceccarelli’s work. The Occidental Arts and Ecology Center and Shone Farm of Santa Rosa Junior College are conducting an Evolutionary Plant Breeding Project, implementing some of the same techniques in their fields in northern California.