Standing in Solidarity with the Movement For Black Lives 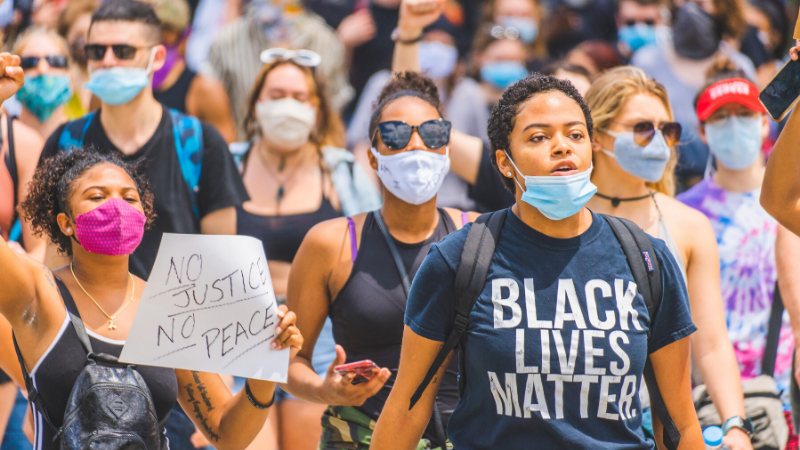 This article contains the content from the 6/04/2020 Bioneers Pulse newsletter. Sign up here to get the newsletter straight to your inbox!

Bioneers stands in solidarity with Black communities and allies who are collectively rising up in resistance to systemic racism and state-sanctioned violence against Black lives. The unforgiveable murder of George Floyd and so many others is not evidence of a broken system as much as the direct legacy of a nation built on colonization, genocide and slavery, evidence of a system working as initially designed. It is well past time for change and it is incumbent upon us all to work to dismantle white supremacy towards a just and equitable society.

“The city I live in has been alive with resistance. People have been in the streets. Hundreds have been arrested. And thousands now have faced tear gas, rubber bullets, and police violence while protesting.”

These are the words of activist Arielle Klagsbrun, not in response to the protests taking place in recent weeks, but in response to the Ferguson protests that took place nearly six years ago. Despite the relentless efforts of activists and organizers within the movement to dismantle systemic racism, it is all too clear that progress toward racial justice has been painfully slow at the cost of innocent human lives.

Thousands of individuals and organizations have been pouring their hearts and souls into this work for so long. As professor, scholar (and Bioneers board member) john a. powell suggests in a recent essay for the Othering and Belonging Institute, “…fissures are beginning to appear in the system. And when cracks start to show, we have to keep on hammering.”

This week, we lift up and highlight voices within our community for clarity and guidance as we seek to tear down the systems that have allowed — and encouraged — systemic racism and violence to persist.

Black Lives Matter Co-Founder: Protests Are the Result of “Police Terror with No Accountability”

“We have created a system that overrelies on law enforcement and prioritizes their money, their budget, their needs over everything else,” says Patrisse Cullors, co-founder of Black Lives Matter and Reform L.A. Jails.

“I think these protests are massive in a way that we haven’t seen them in years, for a number of reasons. Number one, we’ve had to live under four years of a Trump regime that has completely devastated communities financially, spiritually, emotionally. And number two, we have dealt with years of police brutality, police violence and police terror, with no accountability whatsoever. And this generation is tired. Enough is enough.”

We’re in a Moment of Collective Trauma. But There are Glimmers of Hope.

In this recent essay, professor john a. powell acknowledges “the profound grief and trauma being experienced particularly in Black communities which, after centuries of struggle for freedom and equality, have seen the struggle move with fits and starts.”

But he says we must acknowledge our pain and embrace our hope at the same time, and let our care for the world guide us to create a better one together.

Backlash Moment: Converging at the Crossroads of Identity and Justice | Kimberlé Crenshaw

When Donald Trump rode a wave of white anxiety into the White House, it was part of a backlash to the Obama presidency, one that revealed an increasingly explicit white nationalism and revived an overtly exclusionary agenda: roll back rights and protections for people of color, immigrants, Muslims, women, and gay and transgender people. Then came the backlash to the backlash: a rapidly spreading awakening that all these peoples, movements and struggles are actually connected in one story. Visionary law professor and change-maker Kimberlé Crenshaw shows that it’s only at the crossroads of our many identities that will we will find a story big enough to embrace the diversity and complexity of our globalized 21st century world.

Listen to the episode here.

In this video from the Bioneers archive, a leader of the “Take Back Saint Louis” campaign, which seeks to remove tax incentives to corporations profiting from climate change, reads “An American Horror Story — Open Letter from Ferguson Protestors and Allies.” Unfortunately, this message still resonates today.

As Black, Indigenous and People of Color (BIPOC) share their lived experiences of oppression and discrimination — as well as their wisdom for moving forward to dismantle the systems that perpetuate it — the value of listening to these voices right now cannot be overstated. Here are a few of so many inspiring  BIPOC organizers and leaders that you should be paying attention to.

How to Support the Protesters Demanding Justice for George Floyd

This Teen Vogue article shares important resources — such as bail funds and organizations to know about — for helping protesters in need, along with further tools for getting involved and making your voice heard.

This article contains the content from the 6/04/2020 Bioneers Pulse newsletter. Sign up here to get the newsletter straight to your inbox!