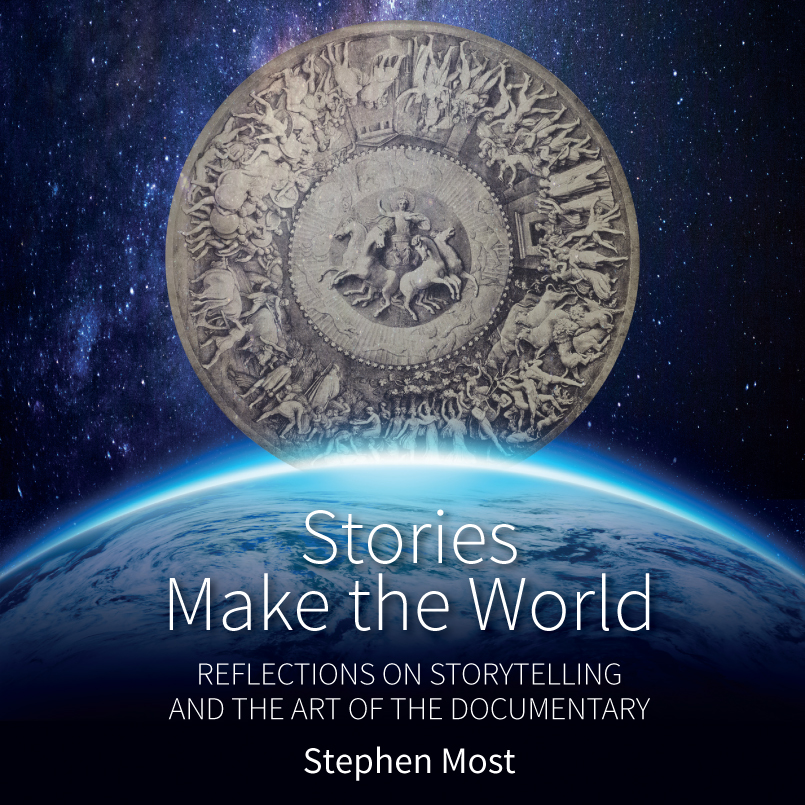 According to Cal Fire Chief Ken Pimlott, “We are experiencing now the fires of the future.” The documentary Wilder than Wild: Fire, Forests, and the Future reveals how fuel build-up and climate change have exposed Western wildlands to large, high intensity wildfires, while greenhouse gases released from these fires accelerate climate change. This vicious cycle jeopardizes our forests and affects us all with extreme weather and more wildfires, some of which are now entering highly populated wildland-urban areas.

This award-winning documentary will screen at the Rafael Theatre in San Rafael on September 12th at 7 pm, hosted by the 2019 Bioneers Conference.

Filmmaker Stephen Most examines the making of Wilder than Wild in the following excerpt from Stories make the World, Reflections on Storytelling and the Art of the Documentary, published here courtesy of the author and Berghahn Books. If you enjoyed the excerpt, consider purchasing the book via your local bookstore, IndieBound, or Amazon.

Both documentary storytelling and a politics aimed at restoring the common ground have insights to gain from ecological understanding. An ecosystem is comprised of the interrelationships of living organisms and their environments. Mutualisms are connective tissue between different forms of life, as when truffles evolve with aromas that appeal to the small mammals that eat and spread them around, or when a fungal network colonizes tree roots, receiving carbohydrates as it transports water and nutrients from plant to plant. When one thinks like a mountain, as Aldo Leopold learned to do, it becomes clear that predators and their prey are interdependent. Without wolves to limit their numbers, deer populations destroy so much vegetation that they starve and cannot reproduce. Realizing that human beings live and work within the web of ecological relationships, Leopold, while managing forests for the sake of the forest and wild habitats for the sake of wildlife, formed alliances between groups that had been adversaries—ranchers and rangers in New Mexico, farmers and hunters in Wisconsin; for he knew they had mutual interests, namely the vitality of the lands they relied on.

A political ecosystem of this kind formed in the central Sierra five years before the Rim Fire. And although it is difficult to represent an organization in a documentary, Yosemite Stanislaus Solutions had to be part of the picture.

YSS is a stakeholders’ collaborative. It “brought together the local folks that live here who have an interest in how this part of the forest is managed,” explained Susan Skalski. “We had environmental groups, we had farm bureau, we have local loggers, we have local industry, we have elected officials, we have county participation.” The co-chairs of YSS are a logger, Mike Albrecht, whose company is Sierra Resource Management, and John Buckley, who heads the Central Sierra Environmental Resource Center. Member organizations include the Central Sierra Audubon Society, the California Forestry Association, the Tuolumne County Farm Bureau, the Tuolumne Mi-Wuk Tribal Council, Tuolumne River Trust, Hetch Hetchy Water and Power, and Dambacher Construction. The US Forest Service and Yosemite National Park are liaison members.

Forest Supervisor Skalski convened YSS in 2008 because she anticipated a megafire. “We needed to bring folks together and help us figure out how are we going to thin these forests, help make them more fire resilient, as well as enhance other values within the forest, and yet there isn’t enough federal funding to do that.”

Skalski had reason to expect a catastrophic fire. A generation had passed since the last one. In 1987, the Stanislaus Complex Fire burned 147,000 acres. Some of its burn area overlaps the footprint of the Rim Fire. Unlike the virtuous cycle of ecologically beneficial wildfires, the vicious cycle of megafires is due to human errors of omission and commission. Fire suppression is one error of commission. Another is planting within the burn area rows of seedlings that grow into dense stands of trees to facilitate logging. The errors of omission include the failure to use prescribed fire and thinning on extensive portions of the replanted forest.

An irony that I hoped my film could capture is that almost everything that those who cared about the forest did after the 1987 Complex Fire was wrong. The dramatic question the full-length megafire documentary might raise is whether history will repeat itself. Will obstructionist lawsuits, lack of funding for prescribed burns, and industry-favored silvicultural replanting build up kindling for future megafires and increase deforestation over the long run?

The Rim Fire gave YSS a renewed sense of purpose. The collaborative worked with the Forest Service on its post-fire restoration and replanting plans. In contrast to the adversarial tactics of the John Muir Project, their work was consensual, using scientific evidence and reasoned arguments to resolve conflicts and reach agreement without reliance on litigation. They took economic concerns as well as ecological values into account, recognizing that the Sierra economy depends upon the health and resilience of the land. If preservationist politics is binary, ecological politics is multivalent, considering information, interests and impacts from all points of the compass.

The YSS stakeholders had an example of a resilient forest to work toward due to a study by research ecologist Eric Knapp that was actualized in the Stanislaus-Tuolumne Experimental Forest. They invited media to tour the experimental forest to publicize its back-to-the-future approach to forest management.

The last major fire occurred there in 1889. Until the Gold Rush, this forest just north of the Stanislaus Complex Fire and Rim Fire burn areas had wildfires every six years on average. Back then it was low in density, with a mix of individual trees, clumps of trees, and open spaces. The experimental forest left an unmanaged high-density area intact for comparison with the managed plots that were shaped by combinations of thinning and prescribed fires to resemble the pre-Gold Rush forest. The core idea, explained by Knapp and Malcolm North, is that low-density mixed conifer forests of this kind are resilient to major wildfires, sequester the most carbon, have the lowest CO 2 emissions, and store precipitation efficiently, while providing abundant habitat for at-risk wildlife, particularly fishers, goshawks and spotted owls. This could be the objective for the restoration of central Sierra forests. Progress toward that goal could, I thought, give the last act of the megafire film a promising sequence.

Every drama, be it comedy or tragedy, depends on things going wrong. Over the objections of YSS, the Forest Service initiated a replanting program that would restore the kind of dense, easily harvestable forest that the Rim Fire destroyed, though with fewer trees per acre than were planted after the Complex Fire. My production filmed a lovely replanting scene by 250 volunteers including war veterans, girl scouts, and members of Americorps’ National Civilian Community Corps. Separated into two groups, adults and children guided by adults, they worked upon a bulldozed mountainside. The Complex Fire had consumed trees that forested that land until 1987. Many of the trees planted after that fire perished 26 years later in the Rim Fire. I wondered whether the thousands of pine seedlings placed ten feet apart in holes dug into the ground above Buck Meadows in 2016 would reach maturity. Were those volunteers planting trees for a future forest or fuel for the next megafire?

Another mistake the Forest Service seemed intent on perpetuating was its fire suppression policy. An article in Science, whose lead author is Malcolm North, states a truth that is almost universally acknowledged: “Changing climate and decades of fuel accumulation make efforts to suppress every fire dangerous, expensive, and ill advised.” Yet the agency, unwilling to let its scientists weigh in publicly on policy decisions, tried to stop Science from publishing the piece. When that failed, the Forest Service asked for North’s name, or at least his affiliation, to be removed. When Science published the article unchanged, the Forest Service barred North from speaking to the media.

Blowing in the wind right after the Rim Fire was the possibility that in response, the Forest Service would change direction as significantly as after the Big Blowup of 1910. Instead, feeling the prevailing winds several years later, I expected history to repeat itself, as Karl Marx said, “the first time as tragedy, the second as farce.” If the Rim Fire was the tragedy that followed the 1987 Complex Fire, the genre of the next megafire could be tragic farce—tragic in its effects, farcical due to its cause—characters persisting in fixed behaviors regardless of bad results. It would dramatize another maxim by Marx, “The traditions of all the dead generations burden, like a nightmare, the minds of the living.”