When Black Farmers Took on the USDA, Bioneers Raised the Profile of the Largest Civil Settlement in History 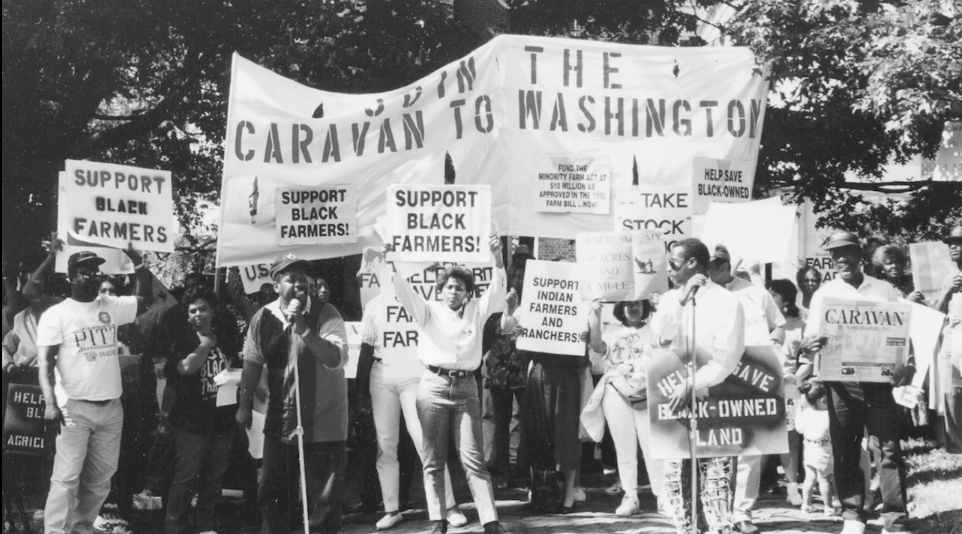 “Thousands of acres of black farmland have been recaptured from bankruptcy. Government foreclosures against black farmers were stopped virtually everywhere. Thousands of destitute black farm families have a new lease on life and a newfound self respect. Bioneers, I think it is fair to say that poor African American farmers have struck a real blow for liberty. And our nation is better off because of it.”

J.L. Chestnut’s two keynote addresses, in 2000 and 2001, at Bioneers reported on the astounding success of a major—yet largely unknown by the masses—class action lawsuit. The success was the result of a story that began more than 100 years prior.

For freed slaves in the U.S., the promise of land to own and farm was the promise of true freedom—the ability to be self-sufficient, vote and pay taxes. General William T. Sherman’s “Forty Acres and a Mule” was, on its face, just such a promise. In early 1865, 40,000 former slaves moved onto their own land on the east coast. The promise was short-lived, however. With President Lincoln’s death, Andrew Johnson became President, and the program was reversed.

Still, many former slaves were able to secure their own land, where farming became their ticket to a new, better life. Often having worked on farms as slaves, these new land owners were skilled and determined.

Fear and outright discrimination can be blamed for the bulk of that dwindling number. The USDA and local programs established to assist farmers were far from accepting of black-farmer progress. Black farmers’ requests for assistance were largely ignored, and white farmers reaped the benefits of available resources.

Inability to receive loans from the government was a tough enough burden to bear. But stories of threats and fear tactics (a noose hanging in an agency office, for example) are also told, giving credence to black farmers’ movement away from tending land or seeking assistance of any kind.

In the 1990s, Bioneers Director of Restorative Food, Arty Mangan, began working with black farmers in the south through the Federation of Southern Cooperatives, providing organic-farming and medicinal-herb training as well as assisting with farmers’-market setup.

Mangan became familiar with what was being called the “Black Farmers Lawsuit,” formally known as Pigford v. Glickman. He learned that, during the 1980s, the entire Civil Rights division of the USDA had been secretly shuttered as a cost-saving measure. “So black farmers are sending in these discrimination claims, and they’re being stored unopened in the warehouse in D.C.” says Mangan.

Enter J.L. Chestnut. The first black attorney in Selma, Alabama, and a colleague of the late Dr. Martin Luther King Junior, Chestnut was a powerful orator. Tough as nails and, at the time, in his 70s, Chestnut—the lead attorney on the Black Farmers Lawsuit—spoke at a Federation of Southern Cooperatives event that Mangan attended.

Inspired by Chestnut’s mission and outraged by the events that led up to the lawsuit, Mangan invited Chestnut to speak at an upcoming Bioneers event. “We talk about environmental justice, but we want to talk about social justice too,” says Mangan. “That’s the core and heart of Bioneers’ work. So it was very profound for us to hear this major Civil Rights leader acknowledge that.”

Big Steps in the Right Direction

Not only was Chestnut’s presence at Bioneers a powerful opportunity to reach a largely in-the-dark West-coast audience during a time when the lawsuit was still underway, it presented networking opportunities as well. Chestnut was introduced to Danny Glover, an actor and activist, who agreed to attend the next Federation of Southern Cooperatives fundraiser.

At that event, Glover read a Langston Hughes poem for the audience. His presence allowed the organization to raise $100,000 that night.

The Black Farmers Lawsuit lawsuit was settled in 1999. The USDA was ordered to pay hundreds of millions of dollars to black farmers who were denied government assistance based on the color of their skin. The payouts are still ongoing to this day, and the case lead to similar successful class action lawsuits against the USDA on behalf of women, Hispanic and Native American farmers.

Chestnut passed away in 2008, but his legacy lives on in a big way. Recent reports show numbers of black farmers on the rise. The 2012 census reported a 12 percent increase since 2007.

Bioneers is honored to have played a small part in the story of this major lawsuit and the rebound of an entire, essential population of farmers.