When we fight, we win 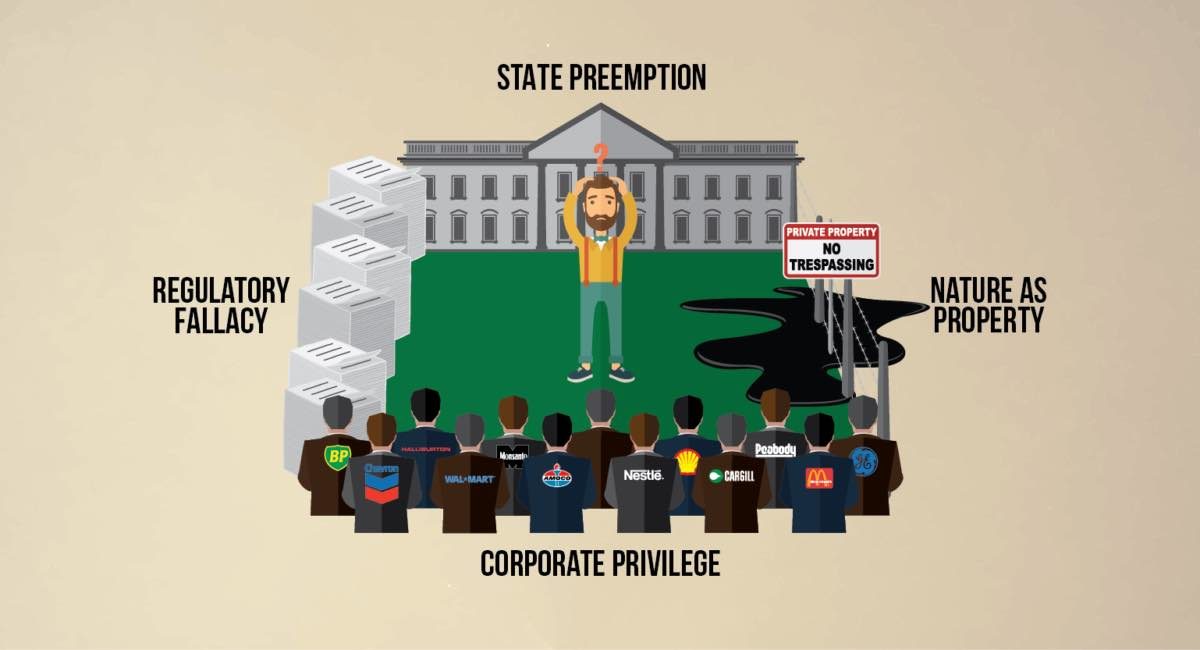 In the 1990’s, CELDF was a conventional environmental law firm. We believed that if only there were more environmental lawyers willing to work for free for communities fighting to stop harmful projects, then justice would get done. We did that work for a number of years.

In the process, we found that the environmental law system is rigged against communities and against the environment. It is a “permitting” system, after all, designed to permit environmental harms rather than prohibit them. It is a regulatory law system, but the only thing it really regulates is how the people try to defend ourselves from the corporate state.1

The Roots of a Rigged System

So we went deeper. We worked with others who were trying to expose the roots of this rigged legal system and understand why it works for corporations rather than for the people. We identified several deeply entrenched legal doctrines that stop people from protecting their health and safety from corporate harms because they prevent community self-government. Those key doctrines are:

There are other deep seated legal constructs that keep the system in place. Some are buried in impenetrable legal codes, while others are hiding in plain sight. We decided to start with these.

Importantly, all of these legal rules are created and expanded upon by judges.8 Part of our work with communities to defend their rights has been to share this with judges so they understand the system they built. In understanding it, they can voluntarily dismantle it.

As we educated people about how the system works, people asked us to help them change it. Communities who had reached the end of their ability to get any remedy from the regulatory environmental law system asked for our help in creating new law. They wanted to prefigure a more democratic legal system whereby human rights and ecological rights are superior to corporate interests.

CELDF has helped many communities do this.

From the Corporate State Ignoring Communities…to Fighting Them

In most of these communities, there was a proposed harmful project spurring them to action. However, when the corporation that sought to harm the community saw the organized opposition – including a local law – the corporation walked away.

[The Community Rights movement] is the beginning of a social movement that is greater than just the oil and gas industry, it is a potential game changer for all of corporate America.
— The Independent Petroleum Association of New Mexico

But over the course of a decade, some corporate actors came to see the threat that this growing movement posed to the corporate state. The Independent Petroleum Association of New Mexico saw the threat. That organization published an article in its newsletter attacking the Community Rights movement, and CELDF in particular. The authors ended with this prophetic sentence:

“While industry, the media and the public might ignore all the commotion created about the hydraulic fracturing discussion, this issue is the beginning of a social movement that is greater than just the oil and gas industry, it is a potential game changer for all of corporate America.”9

By this point, we were no longer being ignored, nor merely laughed at. The fight was on. Corporate lawyers, particularly those working for clients in the oil and gas industry and in industrial agriculture, organized to challenge in court every new law that communities put forward to dismantle the corporate state.

The Oil and Gas Industry Strikes Back

In Pennsylvania, the Pennsylvania Independent Oil and Gas Association (PIOGA) decided to go directly after CELDF, in an erroneous belief that they could stop this social movement by destroying our organization.10 This isn’t hyperbole. A lawyer for PIOGA said to the media that he wants to bankrupt us.11

There are a lot of problems with Judge Baxter’s ruling, but for our purposes here, we need to understand her ruling as part of an attempt by extraction corporations to stop the democracy movement of which CELDF is a part.

The Gist of Judge Baxter’s Ruling

Judge Baxter ruled that these attorneys were on notice that certain arguments are “legal implausabilit[ies].” Namely, they cannot argue that:

Judge Baxter basically told the two attorneys that these arguments are frivolous, and they can’t challenge in court, on behalf of their client, the building blocks of the corporate state. They can’t advocate for a more democratic legal system. If they do, she’ll fine them.

[The sanctions are] a win for the Community Rights movement, revealing the seriousness of the threat we pose to the corporate state.

Judge Baxter’s opinion also makes clear where the buck stops with maintaining the corporate state. Remember, judges built this system. They created the legal structures that Judge Baxter sanctioned these attorneys for arguing against. Over the last 200 years, judges recognized corporate “rights,” narrowly prescribed the “state actor” doctrine, abolished the right of local community self-government, and created Dillon’s Rule. Judges made this system (for corporations). Judge Baxter shows us that not only will judges maintain this system, but they will now fine lawyers who represent clients who question its legitimacy.

The sanctions appear as a huge win for the corporate actors who identified this social movement as “a potential game changer for all of corporate America.” In fact, it’s just the opposite – it’s a win for the Community Rights movement, revealing the seriousness of the threat we pose to the corporate state. Industry is willing to go to great lengths to try and dispose of this democracy movement.

The next step is ours. Not CELDF’s; but ours as a social movement.

In the face of expanding inequality and corporatism, now is not the time to cower. Instead, it is the time to step into bold local action for people power, and against the corporate state.

In the face of a federal judicial system that itself created many of the doctrines upon which the corporate state depends, now is not the time to shy away from politicizing their actions. Instead, it is time to call out – loud and clear – that we will continue to fight to dismantle the legal structures that subordinate human rights and ecological rights to the interests of corporations.

As many of the new social movements today have found: when we fight, we win. We won’t back down now just because the corporate state has taken its gloves off.

1 See, e.g., Jane Anne Morris, Help, I’ve Been Colonized and I Can’t Get Up (1998) (“What Regulatory Law regulates is citizen input, not corporate behavior. So when we cooperate in regulatory law proceedings, we are following the script that corporation representatives wrote for us. We’re either colonized, or we’re collaborators.”), available at http://democracythemepark.org/help-ive-been-colonized-and-i-cant-get-up/.

2 “Ceiling preemption” is when state law (or federal law) sets a “ceiling” on environmental or human rights protections. For example, a state Oil and Gas Act that permits frack waste injection wells “conflicts” with a local law that prohibits frack waste injection wells. Under the judge-made rules of ceiling preemption, this “conflict” makes the local law invalid. Instead of ceiling preemption, we need a legal system that recognizes local governments can protect people’s health, safety, and welfare by prohibiting harmful corporate activities, and that these local laws can be more protective of human rights and environmental protections.

3 Named after the 19th century judge John Dillon, “Dillon’s Rule” is judge-made law that says local governments are mere “creatures of the state,” entirely subordinate to the state, and capable of doing only the things the state authorizes them to do. Dillon’s Rule won out over the right to local self-government. The people rebelled against Dillon’s Rule, enacting “home rule” provisions in their state constitutions at the end of the 19th century and beginning of the 20th century. However, the courts constricted the meaning of “home rule” to re-subordinate local governments.

5 The Dormant Commerce Clause is another judge-made law. The courts interpret the U.S. Constitution’s authorization of Congressional lawmaking over interstate commerce to also have an “inverse” or “dormant” meaning, such that when Congress has not acted to regulate an area of “commerce” (interpreted very broadly), then state and local governments are prohibited from enacting laws in that area that burden interstate commerce. It is constitutional protection for laissez-faire economic policies.

6 In 1819, the U.S. Supreme Court said in Trustees of Dartmouth College v. Woodward that corporate charters had constitutional protection under the U.S. Constitution’s Contracts Clause. This made corporations co-equals with states, rather than subordinates to governments.

8 Judges didn’t write the U.S. Constitution, but they chose to interpret the Contracts Clause, Commerce Clause, 14th Amendment, and other provisions, in order to grant immense power and rights to corporations, thereby subordinating the people’s rights to corporate interests.

11 See Laura Legere, ‘No is no is no’: A tiny township’s fight against oil and gas waste disposal, Pittsburgh Post-Gazette,(Nov. 13, 2017) (“’We’d rather bankrupt CELDF, to be honest,’” he said, referring to the Community Environmental Legal Defense Fund.), available at http://www.post-gazette.com/powersource/policy-powersource/2017/11/13/Grant-Township-Indiana-County-Pennsylvania-fight-oil-gas-waste-disposal-underground-shale-fracking/stories/201711120039.

12 The “state actor” doctrine in law says that corporations don’t have to respect people’s constitutional rights, except under certain circumstances (like when a corporation takes on a government function, like running a prison).