Why & How to Decolonize Your Yard 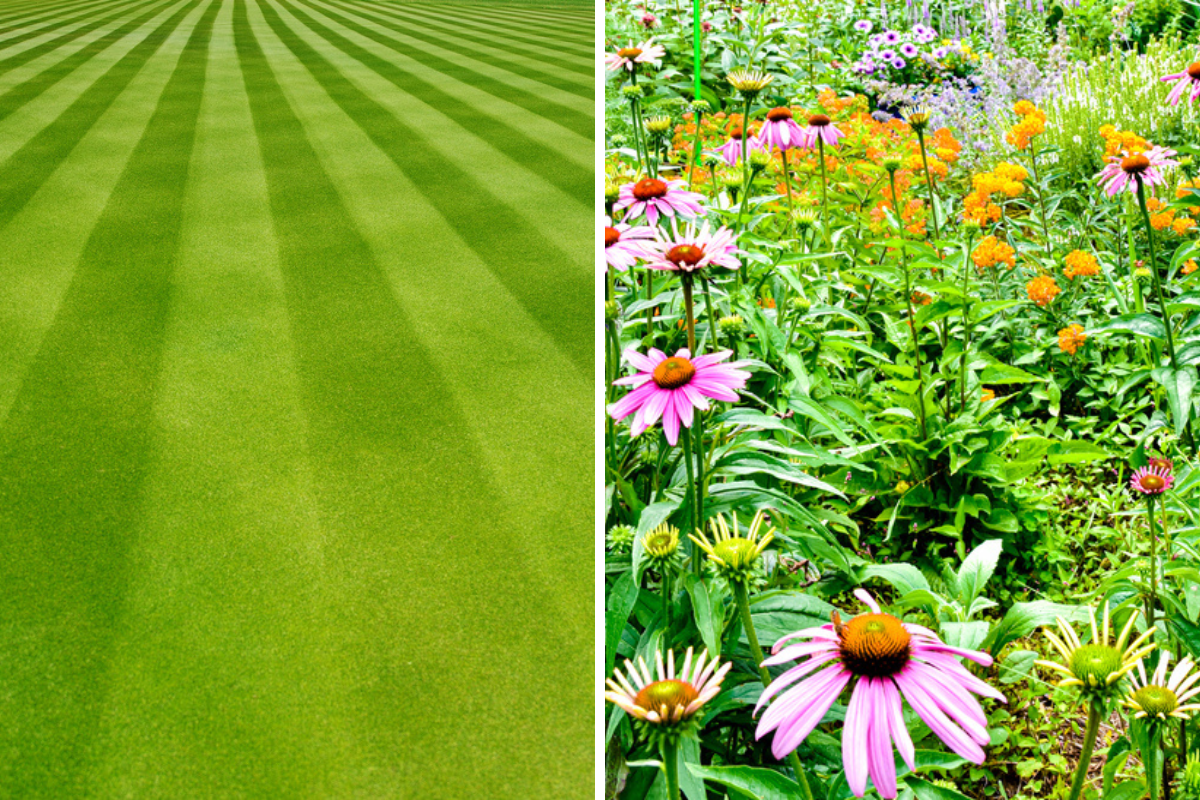 Caveat: Before reading this article, it is important to first acknowledge that many people living in the U.S. are not lucky enough to have a yard. For many Americans, home ownership or even renting a home with access to a yard is not possible due to race-based, intergenerational, structural inequalities.

Americans love to manicure their lawns. It is a sign of pride in homeownership deeply steeped in the “American Dream” to buy a house in the suburbs and raise a family. This “dream,” however, belies deeper, nefarious roots in settler colonization and white supremacy.

The earliest American lawns were modeled after the elaborate gardens of English and French aristocracy in an attempt to legitimize their status in the newly formed U.S. But it wasn’t until well into the 20th century that the lawn became a status symbol of escaping poverty. Americans (overwhelmingly white Americans) were able to move from crowded cities and rural landscapes to the newly formed suburbs designed to look like one continuous lawn space from house to house. Conformity to lawn care standards was, and still is, a sign that one is a “good neighbor.”

This suburban vision of America erases the ongoing structures of power, domination, and extraction that made homeownership and the accumulation of intergenerational wealth possible for (predominantly) white settler descendants. All of America began as Native land. As these lands were extracted from Indigenous stewardship, settlers drastically changed landscapes through the destruction and replacement of Native biodiversity to accommodate new economies. These new economies, including the lawn care industry, are only possible with the removal of Indigenous peoples, the enslavement of African descendants, and the ongoing exploitation of labor, typically from Latin America, and other nations that have asymmetrical economies due to the extractive practices of wealthy Northern nations. Moreover, the majority of American suburbs have a history of racist redlining to keep out people of color.

What does it mean to “Decolonize” Your Yard?

To “colonize” means to take control of land outside of state borders. Settler colonization involves displacing the original inhabitants through force and replacing them with a new population that upholds the invading state’s power. Applying this concept as a metaphor, to colonize a yard means to remove Indigenous plants and replace them with something foreign, disrupting and often destroying the original ecosystem in the process. On the other hand, “decolonizing” — or rather, “Indigenizing” — a yard means replacing invasives with Native plants local to the area. You can still decide on what plants you want and the design of your yard, which is the most fun part of gardening, in my opinion.

I also believe that a “decolonized” yard should fight back against extractive capitalism, which has led to our biggest social and environmental problems, by growing food that can be eaten year-round using organic, preferably permaculture practices. Not only is home-grown produce fresher, tastier, healthier, and more fun, but growing it yourself reduces the carbon footprint and waste associated with purchasing food at the supermarket.

I have been experimenting with decolonizing my yard for the past several years. I started by replacing water-guzzling shrubs with Native bushes along the side fence. The dirt patch in my backyard now includes a Native garden with several medicinal plants. When I was gifted heirloom corn, beans, and squash seeds last year, I tried to grow a “Three Sisters” garden, but the gophers ate the beans and squash. And, my daughter has cultivated a wildflower patch ever since she could walk.

I am not perfect. My front yard, which I only begrudgingly mow during the wet season, has a Native oak in it surrounded by wild and invasive grasses. Someday, I hope to establish a xeriscape perennial garden there. My Native plant garden in the back contains a couple of non-Native fruit trees and plants that existed before I moved in. I also planted non-local but water-tolerant plants, shrubs, and flowers that I like for their aesthetics along another border.

While my “decolonized yard” experiments are nowhere near complete (and will probably never end), I have observed several benefits over the years.

The Benefits of Decolonizing Your Yard

Conserves Water. Ignore this point if you live in a part of the country where it rains often and consistently. According to the EPA, landscape irrigation accounts for nearly one-third of all residential water use, totaling nearly 9 billion gallons per day. And, as much as 50% of this water is wasted due to environmental conditions and inefficient irrigation methods and systems. I live in a place with some of the most expensive water in the country, where summer water bills for people who water their grass easily tops $500 a month! Why would you waste water in a place where it is scarce?

Reduces Fossil Fuel Pollution. My neighbors love to leaf blow. One neighbor of mine leaf blows several times a week (and often, multiple times a day). My other neighbor has a “lawn person” come every other Saturday morning, at which time he blows three houses around me, subjecting the neighborhood to his extremely loud gas blower for hours. One study shows that the hydrocarbon emissions from a half-hour of yard work with the two-stroke leaf blower are about the same as a 3,900-mile drive from Texas to Alaska in a Ford F 150. Gas lawn mowers are just as bad.

Reduces Chemical Pollution. As you can imagine, my neighbors also chemically poison their trees. When they ask if they can “courtesy spray” mine once or twice a year, I always say “no thanks.” (And, my trees are doing just fine without poison treatments!) Pollutants in the form of pesticides and fertilizers harm the environment and web of life as these chemicals make their way into the groundwater. My neighborhood has a serious problem with peoples’ pets dying of poisoning (vet confirmed) from eating small mammals that have ingested concentrated amounts of “yard maintenance” poison from their food sources. If peoples’ dogs and cats are dying of this, so likely are the wild animals that we share our community with. If that’s not convincing enough, Americans have an average of 43 different pesticides in their bloodstreams according to the U.S. Centers for Disease Control and Prevention.

Reduces Noise Pollution. The noise pollution emitted by leaf blowers and lawn mowers also deeply disturbs ecosystems. I observed that my neighbor who blows every day has practically no birds in his yard, while my yard hosts several species. Decolonizing your yard involves a responsibility to make a habitat that is welcoming to insects and animals who rely on audio cues to find food, avoid danger, mate and eat. Loud noises from garden tools drown out natural sounds and stress wildlife, threatening their survival and the stability of animal populations. On a broader scale, a meta-study in the Royal Society suggests that human-caused noise pollution negatively affects every kind of animal, and even plants, across the planet, contributing to the human-caused 6th mass extinction.

Invites Animals. If you want to attract certain species, your yard needs to have the plants that they eat (or that provide the food for their prey). I have carefully selected plants to optimize the variety of types of birds that come to my yard as well as insects. I was thrilled last summer when I saw a California Mantis for the first time in the wild, in my garden! In addition to planting flowers that attract endangered bees and other pollinators, I love watching the annual ladybug hatching season.

Controls Animals You Don’t Want. My neighborhood has a huge gopher problem. When I planted a Native garden in my backyard, I noticed that the gophers stopped coming up there, yet they persisted in digging up holes throughout my front yard, which still has the grass they like to eat. My theory is that the Native plants have evolved alongside the gophers in a kind of an arms race to adopt traits that make themselves not tasty for gophers. Remember those ladybugs I mentioned? They love to eat the pests that go for my food garden. It’s a win-win situation.

Educates About Indigenous Peoples. As I began my journey to replace invasives with Native plants, I had to learn what these plants are, and in what kind of conditions they grow. I found it fun to plan the textures, shapes and colors that would be side-by-side in the backyard. As I was researching, I also took note of how each plant might be useful to insects and animals, including humans. Whenever possible, I tried to learn about the plants from Indigenous knowledge systems, the more local the better. In the process, I learned more about whose ancestral territory I inhabit, how this tribe cultivated the wild, and also about knowledge that was lost throughout the brutal California genocide.

Provides Food and Medicine. I have been playing around with different kinds of vegetable gardens over the years. I am admittedly not very good at it, but each year I have some kinds of fresh veggies that can be picked to add to our meals. Last year, my cherry tomato bush went perennial. So, in addition to my tomatoes tasting far better than store-bought, I didn’t have to buy tomatoes at the store anymore. I also deliberately grew several plants that can be used to treat various ailments used in dried forms in tea. (I also learned that it takes a lot of time and effort to harvest and dry these!)

Offers a Way to Be In Harmony With Nature. Having a yard with Native plants has been so fulfilling. As someone who started with a “black thumb,” I have learned so much about plants and how they interact with insects and animals. But perhaps the biggest benefit that I have gleaned from this process is time spent outdoors observing nature and the joy of watching the plants grow. Better yet, I included my daughter in all these activities, and now she has a deep and abiding love for nature.

Join the Movement to Decolonize Your Yard! Will you join the movement to decolonize YOUR yard? Like me, you don’t have to be good at it. You don’t have to do it all at once. And, you don’t need to virtue signal or take the moral high ground over people with conventional yards. All you need to do is start with one of the following suggestions:

You can do it!

The Great American Lawn: How the Dream Was Manufactured

Is it time to decolonize your lawn?

7 Ideas to Transform Your Lawn With Native Plants

Replace Your Lawn with Native Plants

Noise Pollution Is a Major Threat to Many Different Kinds of Animals, Study Finds

6 Ways to Reduce Pollution in Your Yard

Pesticides and environmental injustice in the USA: root causes, current regulatory reinforcement and a path forward