Working Against Racism in the Food System 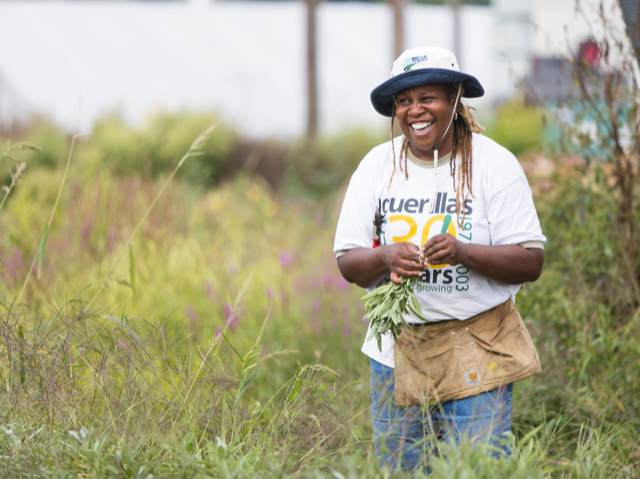 Since the 1980’s, Karen Washington has been a pioneering leader in urban agriculture. She farms in New York City as well as on a rural farm north of the city. In 2012, Karen was named one of the most influential African Americans by Ebony Magazine. This is an edited excerpt from a presentation she made at a past Bioneers Conference.

Shifting Power in the Food System

The food system is not broken; it’s working exactly the way it’s supposed to as a caste system based on demographics, economics, and race. If we’re going to transform this food system, we have to look at power and who has power. The current food system is controlled by a handful of people who are predominantly white men.

The dynamics has to change so that people of color have wealth and power. I’ve been involved in urban agriculture for a long time, and there have been some advances for people of color, but we don’t have power in decision making, and we don’t have the power in policy. In order for that to change, we have to change the way we look at ourselves and change the language of being called poor. In my community, I see people who have done so much with very little resources. I see the power in those communities rather than viewing them as weak. But, I have mixed feelings about the promise of the urban agriculture movement because I don’t see our faces, and I don’t see our voices, and I don’t see our power.

In my community and communities that look like mine, we are trying to form our own destiny. We don’t want to replicate the capitalistic system that extracts wealth, but rather we want to tap into the value of the social capital within our communities. Time and time again we’ve asked for help, but to no avail. So, now we look at our communities as a force and a power to come together to challenge the industrial, capitalistic system and to look at the impact of inequity when it comes to wealth and land.

People have been growing food in cities for thousands of years. There seems to be a feeling that if people are able to grow food in their communities that things are going to change. For me, growing food isn’t enough. We need to address the structural, industrial and environmental determinants that reinforce racism in our society.

When we first started growing food in New York City, it was about taking back ownership of a community that had been devastated because of the exodus of white people – white flight. The people that stayed in those communities were usually people of color.

People began community gardens collectively coming together to change something that was devastated into something that is beautiful. Community gardens were a way to take ownership and to control the food and economics in our neighborhoods. Those things were unheard of in marginalized communities. 20 years ago, we started a community-based farmers market, which was unprecedented in a low-income neighborhood.

Marginalized communities are surrounded by a charity-based, subsidized, food system. In addition, on every block there’s a fast food restaurant. From Monday to Saturday you can go to a soup kitchen or food pantry. I’m not saying that those things are not important, but they don’t encourage local ownership. In order to change the structure of a charity-based, subsidized food system, people have to understand the language of financial literacy, economic development, and entrepreneurship so that the money that we make in our community stays in our community. That’s number one. Starting a farmers market in communities of color is an opportunity to make money and take ownership.

But whenever communities of color try to move forward, politics comes into play. In New York City, there is a growing problem between open-space community gardens and development. How do we make structural change when the local food economy is up against city politics? If we’re going to move forward in the urban agriculture movement, we have to understand the politics that make it difficult to grow and sell food in the city.

The City said it was illegal to raise chickens and bees. Bees were designated as ferocious animals. We had to correct that misconception and educate the City that bees are critical to pollinate many crops. We had to explain the social impact of those restrictions.

I view community gardens and urban agriculture as a way to change the dynamic of the power structure because people within marginalized communities are not going to advance unless we take back power. For me and for a lot of people in my position – not only in New York, but in Detroit, Baltimore, and Oakland – we are trying to change the system so that the power of financial literacy and economic development is in the hands of people who have been oppressed. That means that we have to change the dynamics of the power structure so that people in those communities have control over their food system, but that’s a difficult task. I hear the promise of urban agriculture, but it’s not going to be fulfilled unless the people in those communities have ownership of land, have the right to grow, and have ownership of an economy that is a base for building from the ground up.

A group of people in New York City have decided that we’re going to create something unheard of – a Black Farmer Fund. We have been waiting for support from the USDA for a long time. We have been waiting for the government to solve our economic dilemma, but the only way we’re going to move forward is by building social capital and wealth within communities of color in place of the capitalist system that extracts wealth and resources.

The Black Farmer Fund in New York State has started to put the power back into the hands of people that look like me. We’re starting to form a language that is totally different. We’re trying to get people who have been out of wealth building, who have been out of the context of economic development and entrepreneurship and making them understand the power that they have within their own community to build wealth. Wealth building is never talked about in our community. Financial literacy and ownership are not talked about in our community.