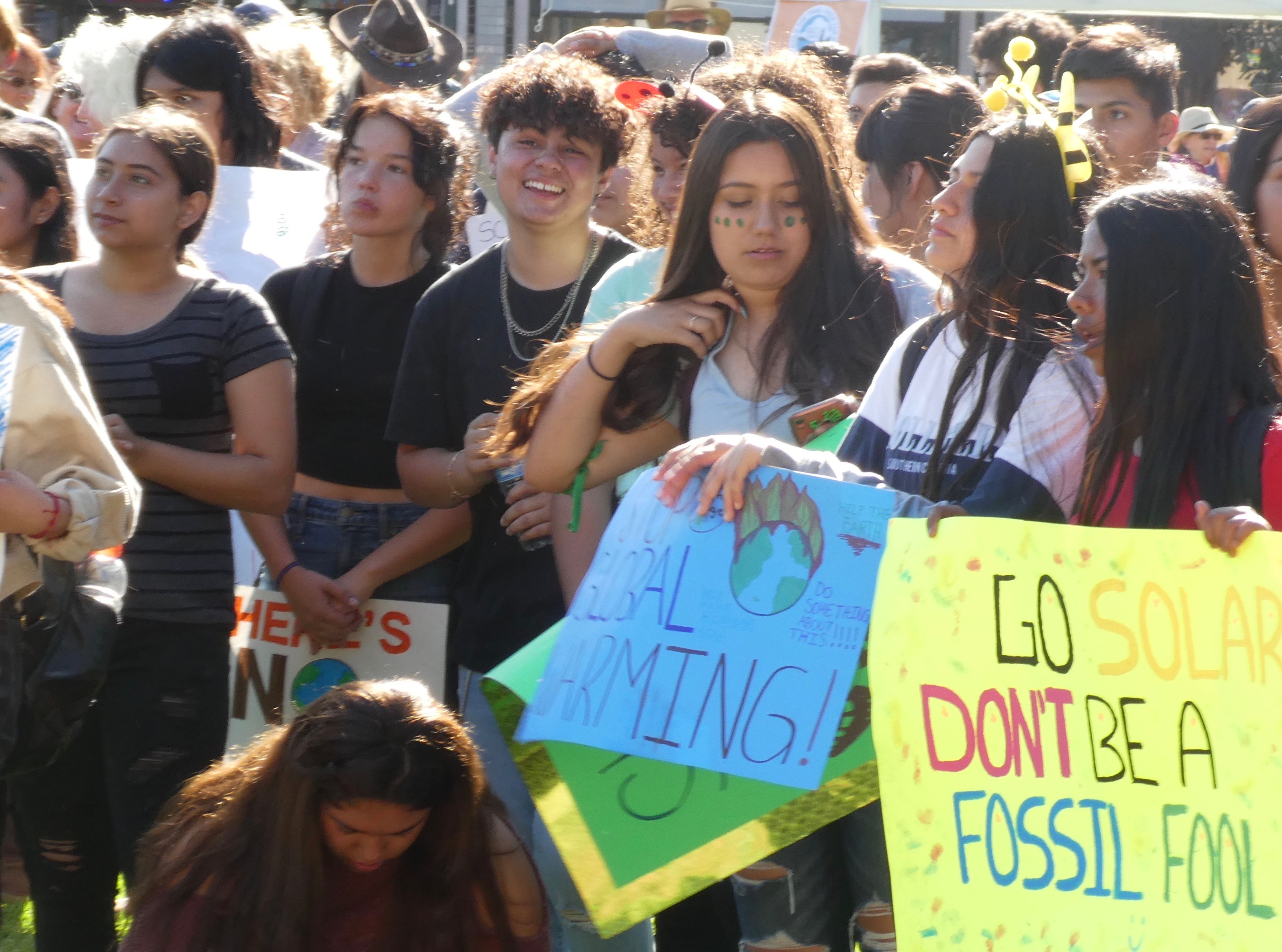 September 20th, the global morning started in Australia where more than 300,000 people marched in what is said to have been the largest climate action in Australia’s history.

Despite the derisive but justified attitude by some youth that the older generations have left the world in an unmitigated mess, young people are unquestionably taking an aggressive lead in the Climate Justice movement. The New York Times wrote, “Rarely, if ever, has the modern world witnessed a youth movement so large and wide, spanning across societies rich and poor, tied together by a common if inchoate sense of rage.”

With a mix of encouragement and concern, I traveled an hour south to Watsonville, CA to participate in a student climate rally. Watsonville is an immigrant farmworker community with an 81% Hispanic population. The center of Main Street, which is lined with stately old buildings, is the City Plaza, a classic Mexican Zocalo style park surrounded by palm trees. Around the edges of the park a farmer’s market was in full swing. Climate activists, mostly adults, standing along Main Street held signs as cars passed and honked in support.

The mood was festive, but the news, on a variety of fronts, is oppressive. An article on Extreme Heat in Rolling Stone reports that the US Department of Defense has warned that climate change “will affect the Department of Defense’s ability to defend the nation and poses immediate risks to US national security.”

MIT researchers say that rising temperatures combined with humidity could eventually make much of South Asia uninhabitable. This could hold true for significant parts of the American Southwest due to extreme heat. In 2003, 70,000 people died in a heat wave in Europe. July 2019 was the hottest month on record.

In the Monterey Bay Marine Sanctuary, just a short drive from the City Plaza, 5 years ago a record warming of the Pacific Ocean caused the fisheries and the marine food chain to crash, and starving sea lions showed up on beaches. The same kind of warming is developing again.

In 2017, when Hurricane Harvey dumped over 40 inches of rain turning much of Houston into a lake, water rose in the home of friends of our family. They retreated to the second floor and when the waters kept rising they fled to the balcony. Then the waters rose to the level of the balcony, but fortunately a boat came by and rescued them. We are already living in a world hotter than any time in human history.

For all of this and much more, New York City gave one million students permission to skip school and join the world-wide strike. 100,000 people gathered around the Brandenburg Gate in Berlin. Millions worldwide joined the strike in places like Indonesia, Johannesburg, Manila, Germany, Poland, Australia, Nairobi, Kenya, just to name a few. Marchers in 150 countries, led by youth, protested government inaction on climate change.

In the Watsonville City Plaza, the crowds were more modest, perhaps 200 people, but nevertheless the concerns ran deep.

Watsonville mayor, Francisco Estrada, said,“Our leaders in Washington and around the world have mortgaged your future for profits, they have done everything in their power to kill the earth all in the name of greed, all in the name of capitalism….We need to take back our planet.”

At the end of his talk, Pajaro Valley High School (PVHS) students, who made a carbon neutral trip to the rally by walking the 2.4 miles from campus, marched into the park chanting “Another world is possible, the youth are unstoppable.”

They then took the stage, some spoke in Spanish. There was some gleeful Trump bashing, real concern about how climate change is driving refugees to the US southern border and how capitalism is destroying the earth. They also criticized the media for covering frivolous topics like the Kardashians instead of climate change.

Many of these youth are the first generation of their families born in the US whose parents migrated and worked low-paying hard-labor farmworker jobs and who struggled and sacrificed to make a better life for their kids.

The youth raised concerns about the threat to farmworker’s health from heat exposure and the potential for lost wages if work is not possible in extreme heat.

Miguel Orejel, faculty advisor for the Dream Club at PVHS who works with undocumented students said, “The people who are affected and will be affected are working class people of color. Capitalism is killing us.”

James Raygoza, who noted that unlike in New York City, he and his fellow students were not given the day off from school, said, “Our collective future is being jeopardized and it is in our best interest to fight against those who sacrifice our future for the sake of profits.”

13-year-old Luke Zamora of PVHS staged a die-in on campus to highlight the threat to life by climate change. He asked everyone to, “Look around you. Look at the trees and all the buildings, think of all the memories you have made in this beautiful city and realize that all of this may be under water if we don’t do anything about it.…We are literally killing ourselves slowly and since the adults aren’t doing anything, lets us, the youth, do something about it.”