A Tribute to Gabriel Howearth, Champion of Biodiversity 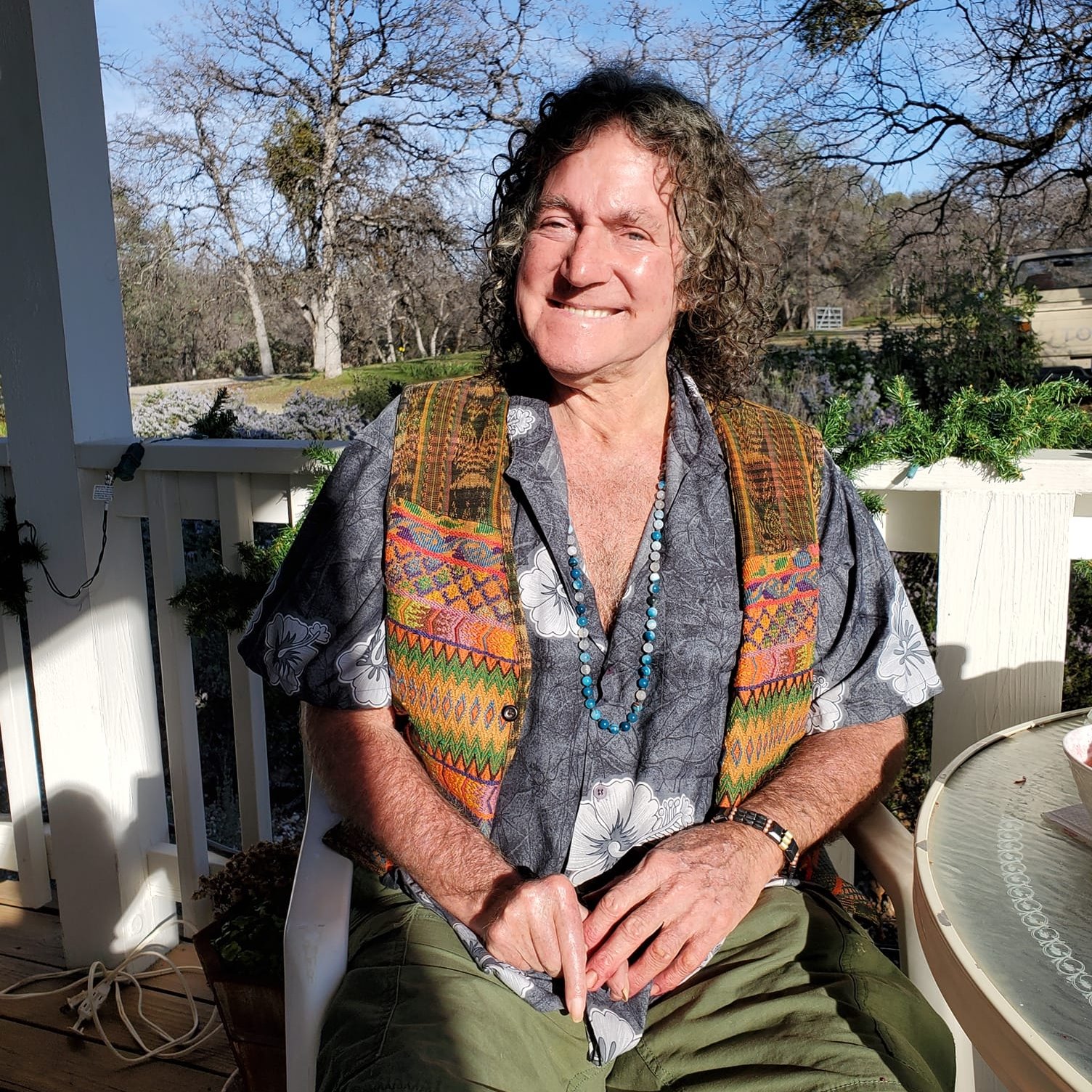 The plant kingdom is in mourning; their great long-haired ally, Gabriel Howearth, was swept away in August by the violent surge of a flash flood in Lo de Marcos, Mexico. The force of the waters turned over the pickup truck that he was traveling in, pulled him out of the vehicle and, presumably, out to the Pacific Ocean. His body, to date, has not been found. He was an extraordinary person who lived an extraordinary life.

Gabriel was renowned among herb farmers, seed savers, permaculturists, organic farmers and thousands of other people who learned from his profound depth of knowledge about plants and seeds as well as from his vitally important contributions to biodiversity in agriculture and gardening. Driven by his remarkable passion for botanical diversity and an indefatigable creative energy, he created unique, spectacularly beautiful and profoundly influential world-class gardens and farms in Oregon, New Mexico, and Baja, Mexico.

As a boy growing up in Southern California, Gabriel’s father took him to underprivileged neighborhoods to help start gardens for low-income families, instilling in him a deep sense of community service. It was the beginning of his love affair with the garden, and the first calling of his destiny. Later, he studied at UC Santa Cruz with the legendary Alan Chadwick who directed him to learn from Indigenous farmers. Gabriel took his mentor’s advice and traveled the world, working with Native farmers from a wide range of cultures, many of whom shared with him their most precious gifts – their traditional heirloom seeds.

These global travels awakened him to the many facets of biodiversity and its fundamental importance to the web of life. It was not just a botanical issue, as important as that is; Gabriel understood that the botanical, ecological, cultural and spiritual aspects of humanity’s relationship to nature were inseparable. He once said, “In cultures that are disappearing, usually there is a set of plants that is going with them, and a spirit in the food, unique to the culture, that is being lost.”

Landing in New Mexico, he was invited by the elders of San Juan Pueblo to help them, as Gabriel stated in a 1990 LA Times interview, “regain their once-thriving and now fast-disappearing culture rooted in the soil….Part of the San Juan project involved searching for many types of old seeds that had been preserved for generations in gourds, pots, and other vessels as well as in the adobe walls of buildings and in the root cellars of traditional Indian pueblos throughout the region. Someone found some seeds of the sacred red corn of San Juan, which hadn’t been grown for 40 years, and planting it again felt like a spiritual homecoming for me.”

The work at that cutting-edge experimental farm became the inspiration for Seeds of Change, co-founded by Gabriel and Kenny Ausubel, which, later led to the birth of Bioneers. Nina Simons, co-founder of Bioneers, on her first visit to that farm was so inspired by its beauty and diversity it changed the course of her life. The way she describes that experience is, “Nature tapped me on the shoulder and said, ‘you’re working for me now.’ ”

They understood the immense importance of open-pollinated heirloom seeds that were adapted to a specific place and were in the public domain. Concerned that multinational corporations were offering fewer and fewer varieties and about their attempts to monopolize the seed business, Seeds of Change’s mission was to inspire a legion of backyard gardeners to grow and save heirloom seeds and preserve food crop biodiversity. It was the genesis of a grassroots seed-saving movement that today expresses itself in seed exchanges, seed-lending libraries and small local seed companies attempting to offer an alternative to the mega-corporations’ increasing control of the food supply.

By the late 1990s Gabriel found an ideal 10-acre piece land (that grew to 20 acres) on which he developed his last, and most impressive botanical garden, near the town of La Ribera on the coast of the Sea of Cortez north of Los Cabos in Baja California, Mexico. That coastal desert land is blessed with an abundant supply of water from an aquifer fed by the Sierra de La Laguna mountains, the southernmost range on the Baja Peninsula. Located on the Tropic of Cancer, with a year-round growing climate, abundant sun and Gabriel’s botanical brilliance, he began to create his masterpiece, the Buena Fortuna Botanical Gardens.

Under Gabriel’s stewardship, with the help of Kitzia Kokopelmana, the land became an Eden in the desert with 3700 different plant species from the dry tropics around the world, many of them endangered. Plants from India, Madagascar, Chile, Peru, South East Asia, Saudi Arabia, Yemen, Oman, Somalia and Ethiopia flourish in the “Kinship” gardening system that groups together plants in the same botanical family from different parts of the world. In addition, several hundred different vegetables and fruits are grown at Buena Fortuna.

In a Bioneers interview, Gabriel said “The plants and seeds we grow are shared with other botanical gardens and private collectors so that they can be preserved in different situations. The strategy is to make sure that whatever you collect you spread to each continent that has a similar climate, so that if there is a climatic condition (or some other cause) in which that plant species perishes, it will be preserved in another part of the world.”

With my wife Jan, I visited Buena Fortuna in the early 2000s. At the time the garden was only about 5 years old, but everything was so lush, vibrant and vigorous, it looked as though they had been there for decades. We slept in a tent and were awakened at dawn by a symphony of bird song. Buena Fortuna is on the Pacific flyway, and as birds migrate south along the desert of the Baja peninsula, hundreds and hundreds of them head straight to the bountiful garden oasis for rest and rejuvenation.

Traveling to Buena Fortuna, after a night on the ferry crossing the Sea of Cortez, we landed in La Paz and took a bus that dropped us off in a rural area about 3 miles from the Botanical Gardens. Where we got off there was an arroyo about 30-feet deep and perhaps a few hundred meters wide. When I looked at it, I couldn’t imagine that something like that in such an arid climate could ever fill up with water. Along the banks of the arroyo were a number of very simple but sturdy homes with corrugated tin roofs.

A couple of years later, soon after the birth of Gabriel’s and Kitzia’s 2nd son, a major hurricane hit the cape region of Baja with heavy rains and 200 kilometer-per-hour winds. The structures at Buena Fortuna are built of local natural materials and materials grown in the garden, mainly bamboo construction with thatched roofs. People from the nearby community by the arroyo urged Gabriel and his family to take shelter with them in their homes; they were concerned that the dwellings at Buena Fortuna were not going to survive the oncoming storm. Gabriel decided to stay at Buena Fortuna. During the storm, he sat with his back to the wind inside the bamboo home holding his baby in his arms for hours. The structures bent and swayed alarmingly in the violent winds but never broke. The arroyo filled with raging storm water and some of the homes along its banks were destroyed. Many of the trees at the botanical gardens were knocked over but ultimately survived and regrew. Buena Fortuna showed remarkable resilience.

I worked with Gabriel on two Bioneers projects. He and I traveled the back roads of the Deep South meeting with legacy African American farmers whose great-great grandparents were slaves. We collaborated with the Federation of Southern Cooperatives bringing Gabriel’s expertise in medicinal herb growing and organic farming to free workshops for Black farmers. For the Dreaming New Mexico project – a blueprint for a local food system at the state level­ – Gabriel designed a nutritional garden that grouped plants by the nutrients they contain. By eating something from each section, you would be consuming a balanced, healthy diet.

About 12 years ago, Gabriel came down with a life-threatening case of meningitis and was very close to death. He recovered, but it severely affected his speech, his walking and the use of one hand. He spent years rehabilitating but never fully recovered. Even so, he was able to, once again, teach and consult on projects. Despite significant physical challenges, he maintained his passion for biodiversity and dedication to sharing his knowledge.

A master seedsman, a tireless defender of biodiversity and an amazingly creative horticulturist, Gabriel increased biodiversity everywhere he went – Baja, Brazil, Oregon, Alabama, Mississippi, and the Indian Pueblos in New Mexico-just to name a few. In one wild, tragic and heart-breaking moment, he is gone.

The plant kingdom is in mourning; their great ally was swept away.

In the petals of every flower, dew drops turn to tears because Gabriel is no longer with us.

The spirit of the plant world guides him now, lifting him from the raging water to somewhere beyond this world of mountains and streams that he loved.

His legacy, embedded generationally in the seeds and roots, his essence in the flowers and fruits.