The Amazing Life of Bees and the Threat of Systemic Pesticides: An interview with urban beekeeper Terry Oxford. 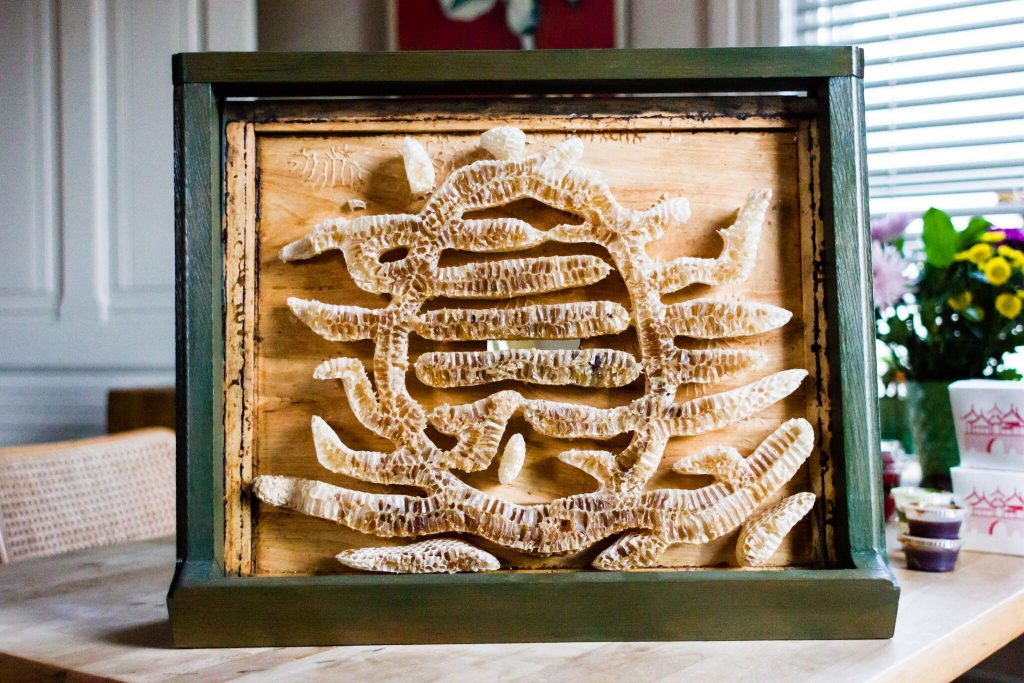 Terry Oxford of UrbanBeeSF has been a successful treatment-free beekeeper on San Francisco rooftops gardens since 2011 and an outspoken advocate against pesticides that harm pollinators. Arty Mangan, program lead for the Restorative Food Systems Program at Bioneers sat down with Terry to talk about bees.

AM: Bee society is very sophisticated. Some people refer to the hive as a super organism.

Terry Oxford: It’s a completely intelligent being. You have to look at a hive as an entire entity. It’s made up of different components and living parts, but the whole thing operates as one system, and the entire goal is to keep itself alive. Everything it does is for the whole, for the group.

That’s why bees are so much more intelligent than humans are because bees are long-termers on the planet. They’ve been here for billions of years. They’re going to far outlive us because they work for the whole. They work for the group and help support each other. It’s very unselfish, whereas, humans – bless our souls – are much more focused on the individual and we don’t see ourselves as a group. We’re less sustainable as a species than bees are.

Bees sacrifice themselves for the others and interact with other parts of nature during pollination, that’s what makes them such special creatures and important to so many different parts of our existence.

The whole hive is largely a female group. There is the queen and the workers. The workers are the bees you typically see outside of the hive working in flowers. They bring in the nectar and the pollen. When they’re very young they stay home and they do jobs within the hive, such as nurse bees, taking care of the larvae, packing the pollen and doing all sorts of work.

The males, who are also very very important, reproduce with the queen. That’s their main job. They’re shorter lived and are often removed from the hive if they’re not needed. The ratio is much higher female to male within the hive at any given time.

The important thing about the hive to consider is that it is basically a uterus. The entire thing is a nest of eggs and larvae at varying stages of life, and the nest has to be protected, taken care of, fed, and the entire thing is constantly keeping itself at a certain temperature to keep the larvae alive, and also at a certain critical mass of larvae.

Bees plan for a future hive that may not include them individually, because they don’t live very long. Their whole existence is about keeping the babies healthy and safe. That’s what keeps them sustainable. I really admire that as a society.

AM: You’re in an urban environment, do the bees help put you in touch with nature in the city?

Terry Oxford: Raising bees in the city is critically important. About 6 or 7 years ago the majority of the planetary population shifted from rural to urban. Cities are now where most of us live, and one of the things that is making us suffer as a species- our madness and depressions- come from a lack of nature.

In 2010 I put bees on the roof of Quince and Cotogna restaurants. They’ve planted a pollinator garden on their roof. Any beekeeper knows that’s just a snack, but it’s an important message, and it’s symbolic of what you can do wherever you are. Now almost all of my rooftop gardens are all organic, largely native, and the restaurants pick flowers and vegetables for the meals. Everything serves a purpose.

I see all sorts of nature on the rooftops. I see stick bugs, swarms of beneficial insects like ladybugs. They come because there’s food. I see a lot of birds, and I feed them. They’ll eat the dead bees on the ground, or they just pick them out of the air.

I make a concerted effort to get companies interested in helping bees-grocers, hotels, all these groups- to put bees on their roofs. I ask that they make sure they’re planting plants that aren’t poisonous to bees. If they aren’t interested in doing that, then I don’t work with them. I only work with companies that will really, truly be green and do something effective to feed the nature in the city.

I work with a company that manages seven commercial properties in the city, and they’ve created little pollinator feeding stations all around downtown. It’s filled with all these native pollinators. You already see mason bees flitting around. It’s safe. It’s not filled with any chemicals.

AM: What are the issues with pesticides and pollinators?

Terry Oxford: There is so much to fight for right now on this planet. There are so many causes, so many fires going, so to save my sanity I picked one fight that I think I can make a little dent in – that’s the systemic pesticides or neonics that have been used in the United States. They were introduced on the market probably 18 years ago. Their invention and use matches exactly the decline of the pollinator system.

When I say pollinators, I’m talking about all the major important pollinators, not just honeybees, the birds, bats, butterflies, native bees, all of these creatures that don’t have as much of a voice as the honeybee does.

Systemic neonicotinoids are a class of pesticide/insecticide that are amazingly effective. Systemic refers to the delivery system for the poison. You can inject it into a tree trunk, you can drizzle it in a soil drench on the root ball, you can spray it on the leaf. It goes inside of the system of the plant and it comes out in the nectar, the pollen, and the moisture drops that ooze out of the leaf that a bumble bee will come along and take a sip of. It’s can be deadly immediately or it can be taken back to the hive and packed into that uterus in the pollen or nectar where it sits in the heat, off-gassing. The neonics kill the reproductive system of the queen, and they’re saying it might have an effect on the males’ reproductive systems as well. It kills over time. It also destroys their navigation system. A bee without navigation is a bee without a home, so it dies. That’s why these particular class of poisons are so incredibly horrible.

There is so much money being made by the pesticide corporations with these poisons that there is no way that they will allow any legislation against them. They don’t care about the pollinator system.  They work really, really hard to fight any legislation to stop or even slow down these poisons. They don’t spend any money on fixing the problem and changing their products. They just intimidate. They’re just like the tobacco industry, and they control the narrative.

Last year in April, there was a really great bill in front of the Sacramento legislature – Senate Bill 1282, a pesticide bill that would have prevented the general public from buying neonicotinoid pesticides, a very bad poison that is so toxic that in agricultural conditions you have to be licensed to use it. But currently anybody can buy it and spray it all over their garden and kill everything. The bill was going to ban that, plus require that plants treated with neonics be labeled in California.

I’ve been to the meetings in Sacramento. I’ve tried to talk about this at beekeeping meetings. I’ve been silenced in my own beekeeping association. The pesticide industry operates with the same playbook as the tobacco industry, the oil industry.

The only measurement that we make of bees is honey, because that’s financially the reason that we’re tied to them and also the reason that they have a voice. Trees are the best source of food – pollen, that’s protein, and nectar, that’s carbohydrate. These two important nutritional factors are critical to the life of the pollinator system. Trees are the best way to ensure that bees are healthy, and that they get healthy, diverse nutrition.

In California, almost every major conventional farming tree nursery is treating their trees with some sort of systemic, making the flowers poisonous. When you plant a tree that has any sort of systemic in it, it will probably last for years, bloom after poisonous bloom, year after year these trees are emitting toxic levels of poison to pollinators.

Why these systemic poisons are so bad is they are persistent. They accumulate in all sorts of areas. They accumulate in the beehive. They may not kill instantly. The pesticide industry doesn’t have to prove their product is safe. They just grease the wheels and the product gets approved and overused by the general public and agriculture as well.

When you go out and buy a garden plant that’s good for pollinators, like lavender, for instance, if it’s not organic and if it’s treated with a neonic, it’s likely to kill pollinators. So you’re going to a store with the full intention of helping the planetary life system of pollinators, and you’re coming back with a little pod of poison and putting that in your garden. For the entire life of that plant or potentially up to 6 years in a tree, it’s poisonous to anything coming for some nectar or pollen.

Unless you are buying plants that are organic or native; no native plant nursery I’ve spoken to uses chemicals like that. But I feel like in these times you’ve got to know, you have to ask the question: What has this been treated with? The general public has a lot of trust in what they’re told. I think that we all need to be much more skeptical. Annie’s Annuals in the East Bay or Bay Area Natives in San Francisco don’t use systemic pesticides. There’s a new nursery in Santa Rosa called Bees and Blooms. They’re planting all organic, biodynamic trees that are great for the Bay Area and have flower blooms almost all year long. They’ve just completed a planting of 1100 flowering ornamental tree seedlings. If I have anything to do with it they’re going to be sold to the City of San Francisco in order to feed my pollinators. But the safest thing to do is to find an all organic nursery.

What I’m hoping to create is a need for systemic-free trees that the City of San Francisco will buy so they’ll stop planting their systemic-filled trees. San Francisco is going to be planting 55,000 trees over the next several years. 75% of those are treated with systemics.

California is the battleground we need to win. If we can get California tree nurseries on board, it will be able to create the financial necessity that the tree nursery industry will listen to.

I think if you want to be a healthy human being, you have to be focused on empathy and compassion for the things that don’t have any voice and don’t have any power. That’s basically the entire natural world.

My fight is for this city and the nature that we live with and need more of. I go to government and city meetings, and they all know me. I had a legislator say to me that I was the very first person to come to him defending earthworms. I took that as a compliment!