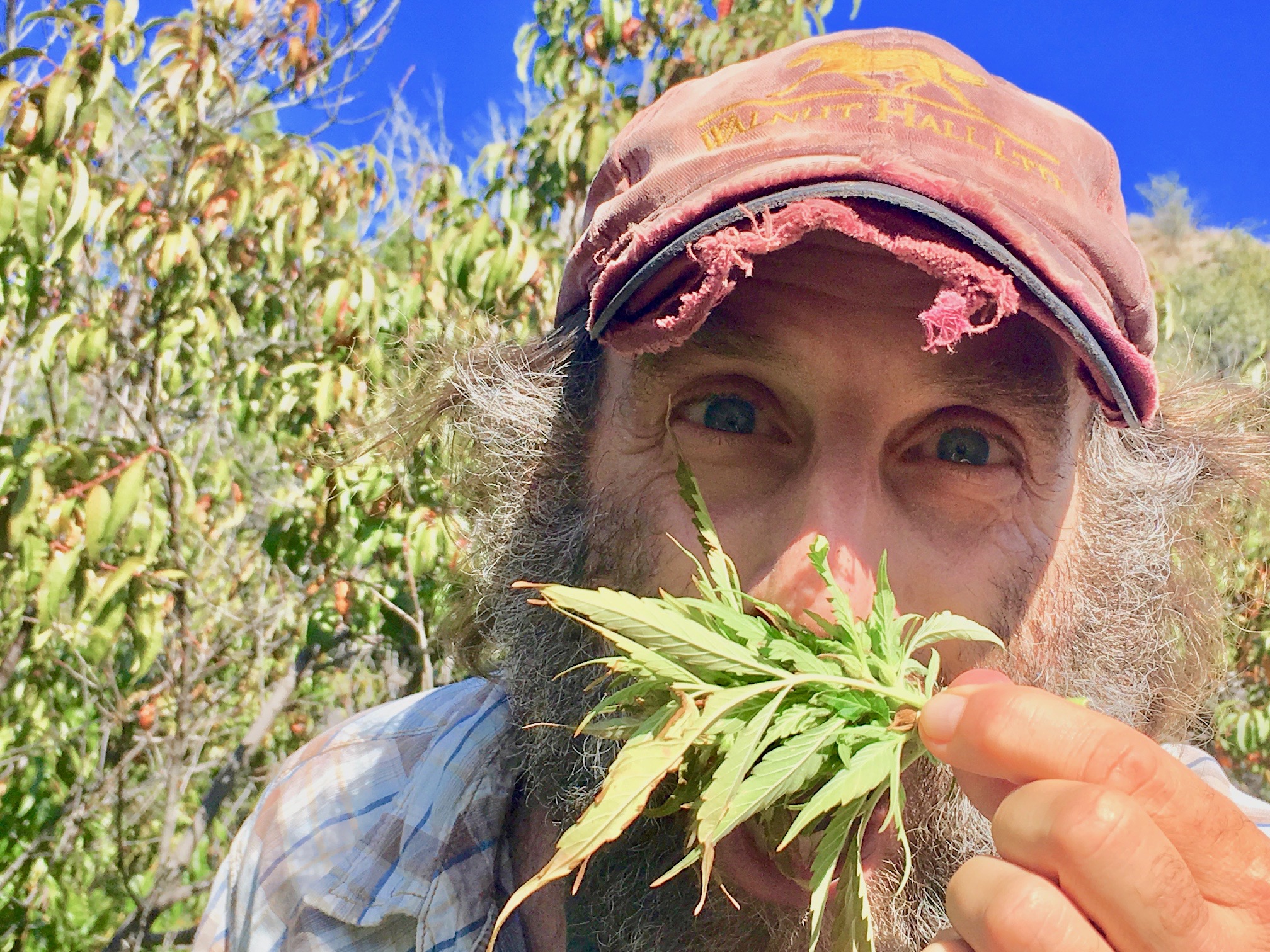 Doug Fine is an investigative journalist and pioneering voice in cannabis/hemp and regenerative farming. He’s an award-winning culture and climate correspondent for NPR, the New York Times, and the Washington Post, among others. He is the author of Hemp Bound, Too High to Fail, and Farewell, My Subaru. The following excerpt is from Doug Fine’s new book American Hemp Farmer: Adventures and Misadventures in the Cannabis Trade and is reprinted with permission from the publisher.

Six years ago, a bear fleeing a wildfire in our New Mexico back-yard killed nearly all of my family’s goats in front of our eyes. It wasn’t the bear’s fault; he was a climate refugee. It was June of 2013, and drought had weakened the ponderosa pines and Douglas fir surrounding our remote Funky Butte Ranch. Beetles took advantage, and all of southern New Mexico was a tinderbox. Ho hum, just another climate event that until recently would have been called a “millennial” fire.

The blaze cut a 130,000-acre swath that year, poisoning the air before the monsoon finally arrived about half a day before we would’ve had to evacuate. But it was too late for the large juvenile black bear, who’d lost his home and his mind. He didn’t even really eat most of the goats. We lost all but one of the animals that provided our milk, yogurt, and ice cream.

Baby Taylor Swift survived, but Bette Midler, Stevie Nicks, and Natalie Merchant (who loved meditating with me in the morning) perished, as did the bear several weeks later, care of a Game & Fish marksman, upon going after a dozen of our neighbor’s sheep. Ever since, my sweetheart and I have had to keep a constant eye on our human and goat kids. We react like a frenzied SWAT team to any unusual noise up in the eponymous buttes above our small adobe ranch house. We’ve had our climate change Pearl Harbor—the event that shifted us into a single-minded new normal. If you haven’t had yours yet, you probably soon will.

This is the paramount reason I’m an overworked employee of the hemp plant: The people I care about most are one blaze away from joining the world’s 20 million climate refugees. At least I get the pleasure of putting “goat sitter” under occupation on my tax form.

There’s nothing like wildfire-fleeing bears attacking your livestock before breakfast to hammer home the fact that humanity is in the bottom of the ninth inning with two outs. The conflagration convinced me that I had to do something, personally, to work on this climate change problem. After some research about carbon sequestration through soil building, it became clear that planting as much hemp as possible was the best way to actively mitigate climate change and help restore normal rainfall cycles to our ecosystem.

At least the fire’s timing was good. Hemp was de facto legalized for “research purposes” in 2014, two months before the publication of my earlier book about hemp, Hemp Bound. I’ve spent the five ensuing years not just covering the new industry but joining it: developing genetics in Oregon and a farm-to-table product in Vermont; consulting, filming, and speaking all over the world; working on university research in Hawaii; and teaching a college course.

But planting hemp and making a living at it can be two different endeavors. My new book American Hemp Farmer blueprints possibilities for independent farmers like myself who’d like to do both, particularly on their own land. If a lot of things go right, an independent farmer (or a farmer cooperative) can make a viable living on a small number of acres. That ain’t exactly the way agriculture has been going for the past century. Just how many acres depends most of all on the part or parts of the cannabis plant you are cultivating (seed, flower, fiber, root). Another variable is whether you’re planning to create a value-added product. A third is if you’re going at it alone or in partnership with others.

Hemp markets are diverse enough that I’ve met farmers who have developed a viable business plan for a 1-acre harvest at the same time that there are independent farms in Oregon, Kentucky, Montana, and Colorado cultivating in the 2,000-acre realm. American Hemp Farmer focuses on a 20-acre enterprise, from soil prep through cultivation and on to strategies for marketing final products.

Though I still consider myself a hemp journeyman, I’ve got a dozen crops under my belt, across varied soils, climates, and laws. So my book explores the most illustrative ways that this plant has put me and others through the wringer during each part of the season. It also follows the efforts of several pioneer hemp-farming enterprises to bring the resulting farm-to-table products to the world.

For those who don’t want to make a living with hemp work but would like to support the farmers who do or perhaps grow their own ancient superfood while sequestering some carbon, the lessons from my ongoing immersion are the same. Plus, for backyard gardeners and pros, working in a hemp field is the most fun you can have outside the bedroom.

Even as I relate the experiences of a half decade in hemp, my book also reflects life unfolding in real time. That’s because when you’re strapped in for the roller-coaster ride of a major industry’s first wild years, new realities arise almost daily on all fronts. In the case of hemp, cultivation lessons, permitting and marketing rules, and promising markets are all in constant flux. Perhaps most important, hemp was just fully legalized for commercial purposes in the United States a few hours before the 2018 winter solstice, the day I started working on this project.

Thanks to a little 28-page provision tucked into the 807-page, $867 billion Agriculture Improvement Act (2018 Farm Bill)—which became law while I was extracting our newest Houdini of a goat kid, Julie Andrews, from the ranch’s winter cover crop—hemp’s federal oversight has been transferred back from the purview of the Justice Department to that of the Department of Agriculture (USDA). This is where it belongs—hemp being just another farm product.

For three-quarters of a century, cultivating hemp (today meaning nonpsychoactive varieties of cannabis) had been functionally illegal in the United States. This started in large part because of a bureaucratic budget shuffle. The guy who ran the federal alcohol prohibition program during its final stages, Harry Anslinger, needed a job for himself and existing staff, so he and some friends in the yellower media set about inventing a problem with one of humanity’s longest-utilized plants.

Under the 2018 Farm Bill provision, our public servants at agencies like the Food and Drug Administration (FDA) will chime in on edible products. In fact, FDA honchos were already issuing menacing memos about being the new sheriff in town, just minutes after law enforcement agencies such as the Drug Enforcement Administration (DEA) had been freed to focus on the opioid epidemic and other real problems.

Those administrative shuffles mean that, in my book, we’ll have to spend a portion of our hemp year off the field, learning how to deal with—and shape—all kinds of regulations: farming regulations, nutritional-supplement regulations, hemp-testing rules. Another way of putting this is that the entrepreneurs and activists who worked for decades to bring about this momentous legalization—and who were justifiably blowing up my phone with a barrage of emoji-laden “Victory!” notes on that joyous day the 2018 Farm Bill passed—are about to have a “be careful what you wish for” adjustment. But that’s okay, and to be expected. Collectively we independent farmer-entrepreneurs (and the customer base that supports us) will make sure the emerging industry rules work for our farm-to-table craft sector. That way we can rebuild both soil and rural communities.

As I type here on the ranch, 10 months after that legalization solstice, the unusually orange orb of a near-full moon is rising outside my office window as though in celebration—one more crop has come in. The long nightmare of cannabis prohibition is over. Its three-generation duration is to our advantage: We can shape this industry any way we like.