California is a Leader in Climate Smart Agriculture 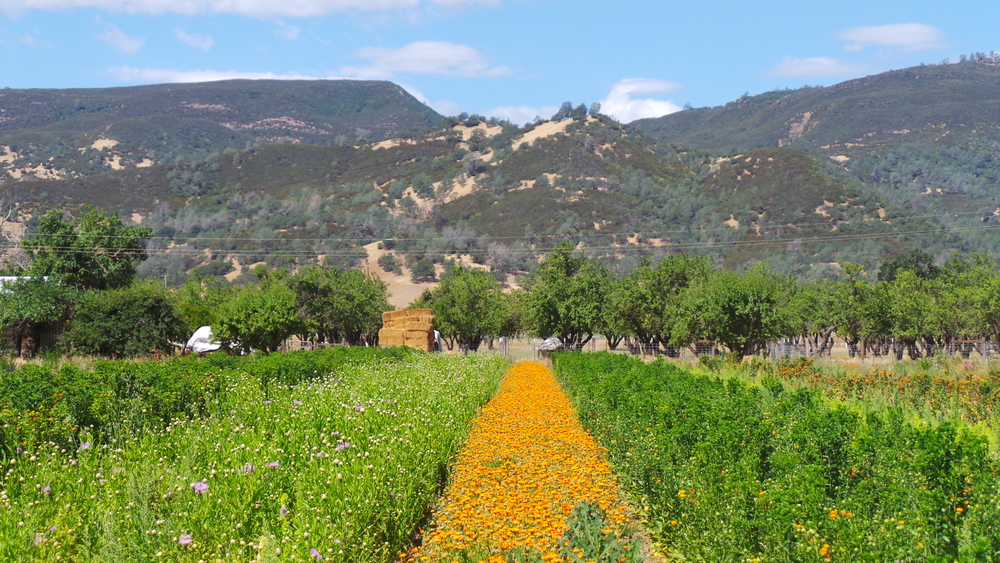 After forty inches of rain, more than double the historical average, the Blue Ridge and Capay Hills that border the beautiful Capay Valley had turned green. I was traveling through this rural fertile valley, the traditional home of the Wintun people and now home to 60 organic farms, as part of a farm tour hosted by the California Climate and Agriculture Network (CalCAN). The first stop on the CalCAN farm tour was Three Feathers Ranch, part of an extensive farming operation comprised of 1400-acres of which 250 are organic. The farm and ranch, owned by the Yocha Dehe Wintun Nation, raise livestock and grow olives, almonds and row crops. Three Feathers Ranch is home base for 600 head of cattle that rotationally graze on 10,000 acres.

The day before the farm tour, CalCAN produced the California Climate and Agriculture Summit at UC Davis. The summit hosted programming on the latest developments in climate smart agriculture including farm biodiversity, carbon farming, farmland conservation, integrated livestock and crop systems, renewable energy, and water conservation. Thanks in no small part to CalCAN’s efforts, California is a global leader in researching and implementing climate smart agricultural policies and practices. One critically important example is the Healthy Soils Initiative, funded by the Cap and Trade program, which has $7.5 million to distribute among California farmers to design and implement plans to reduce on-farm greenhouse gas emissions and increase soil carbon stores. California has allocated $40 million for water conservation (SWEEP), $37 million for farmland preservation (SALCP), and $50 million to reduce dairy methane emissions with anaerobic digesters (methane is a greenhouse gas that in the short term is twenty-five times more damaging to the climate than carbon.)

On the farm tour, we met with Three Feathers Ranch Manager Adam Cline, who works with Point Blue biologist Corey Shake and the NRCS (National Conservation Resource Services) to promote the conservation of wildlife and the local ecosystem by studying nature-based solutions to climate change. Federal programs like EQIP and State programs like the Heathy Soil Initiative provide monetary incentives for farmers to operate as ecosystems mangers in conjunction with their farm management.

Empowering and training farmers/ranchers to be ecosystem mangers and land stewards is a transformational concept. During the Dreaming New Mexico project, a whole-systems look at what a sustainable and regenerative future for an entire state might look like, Peter Warshall wrote, “A landowner does not just own land. He/she owns a piece of the watershed(s) that helps regulate: floods; fires; water flow and soil health; the spread of pathogens, pests and disease; biomass production (photosynthesis); food webs and biodiversity; and nutrient cycling. The land carries memories of the family or beauty or spirit, and may provide space and time for recreation and refuge. Caring for these assets has rarely or adequately been rewarded.”

Programs like EQIP and the Healthy Soil Initiative encourage and compensate the right activities, farming in more enlightened ways to produce food in partnership with nature. Clearly there are not yet enough financial resources allocated, but it is an encouraging start.

It was a pleasure to meet and learn from the farmer-biologist team of Adam and Corey and later in the day the great folks at Full Belly Farm who are focusing their intelligence on understanding and working with nature’s power and complexities.

And where it gets fascinating is at the ground level, the interaction between a farmer and the land through observation, experimentation, learning and making adjustments. The localization of knowledge, the grounding of the art and science of farming to a very specific landscape is a completely different worldview from chemical mono-crop farming that degrades the living system by treating it mechanistically. Respect for the complex life forms in a biologically active farming system is the foundation for creating a resilient, sustainable, food production system and a vibrant and flourishing agrarian culture.

This respect for the complexity of life forms was evident even as Adam and Corey talked about the challenges of balancing a healthy ecosystem with the need for the land to be economically productive. They have developed a dynamic process that takes into account diverse factors including conditions on the ground, wildlife, vegetation communities, soil sampling, water infiltration, soil organic matter and soil carbon, and ongoing adaptive management. They are managing photosynthesis to save carbon in the soil by planting deep-rooted perennial grasses, like Perla grass, that penetrate the soil breaking up compaction and facilitating water infiltration. Deep roots go through growth and dieback cycles, leaving carbon-rich dead roots in the soil. The live roots exude carbon in the form of carbohydrates to feed the beneficial soil biota. Maintaining a healthy riparian zone stores carbon in woody shrubs and trees and provides wildlife habitat. Three Feathers Ranch practices rotational grazing, leveraging animal disturbance on the land to enhance and stimulate new growth instead of weakening plant vigor by overgrazing.

Ten miles north of Three Feathers Ranch is Full Belly Farm, one of the truly remarkable organic farms in California. Full Belly has 350 acres of certified organic production growing 80 different crops and selling all their produce within a 120-mile radius.

The forty inches of rain that the region experienced this year, an eighty-year weather event, added to the complexity, particularly coming after several years of drought-conditions. Paul Muller, one of the four partners of Full Belly Farm, said, “It’s a sobering moment and mud on carrots dwarfs the potential risks if the rain keeps coming and the storms turn warm and melt Sierra snowpack. We certainly keep an eye on the hills above us, realizing that we are simply subject to a much larger power of nature that humbles us and challenges our short-term assumptions of stability and regularity.”

For Full Belly Farm this has meant adjusting planting schedules and techniques around the variables and extremes of drought and torrential rain. Paul led us out to one of the fields that was planted with a cover crop mix of Sudan grass, cow peas and buckwheat that was grazed down by sheep and has now grown back. He explained that having plants on the soil buffers the soil surface from the erosive impact of rain and the root system supports deeper infiltration of rainwater, which mitigates runoff. Using sheep to mow down the cover crop instead of a tractor is a form of no-till agriculture. Paul dug up a shovel full of heavy clay soil to show its friable structure, ideal for root growth and healthy microbial activity, and full of earthworms.

“The trick to no-till is to grow enough biomass and put it down in place rather than using fossil energy to harvest it, compost it and bring it back to the land. How do we make this system fairly stable so the biology is working so we are not using a lot of energy to get the mulch here? There is a lot of experimentation … the mulch is fairly well digested so it could remain as a mulch or be incorporated into the soil. We are trying to figure out how different systems respond.”

Paul added that healthy soil supports soil fungal populations that colonize the sheep manure and decompose it eliminating pathogens. UC Davis has done testing on Full Belly pasture that has had animals on it for 15 years and could not find any e-coli. Interestingly they also found that after cultivation bacterial populations increase and e-coli is present. The thinking is that cultivation disturbs the healthy fungal populations that break down the manure and e-coli. Reducing tillage is not only good for the beneficial microbial populations of the soil food web, but it also reduces the amount of carbon the soil emits to the atmosphere when fields are plowed.

Contrary to industrial farming practices and food safety regulations that try to sterilize the fields, ultimately the answer is more healthy biology in a living system from the soil to the canopy that is not only a food safety buffer, but also the best way to create a climate resilient farming system.

Knowledge-intensive farmers like Adam Cline and Paul Muller, who are keenly observing the dynamics of their land, are experimenting and learning how to manage soil biology and carbon not just for the benefit of their production, but also for the health of the ecosystem and ultimately for the health of the planet. They deserve an enormous amount of respect and must be financially incentivized so that it’s not just the pioneering few who are climate smart farmers and ecosystem managers, but a whole system that culturally and economically supports all farmers to follow their lead.