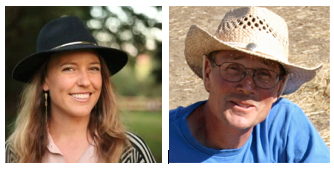 Calla Rose Ostrander and John Wick will address a keynote talk during the 2017 Bioneers Conference and host a workshop on Monday, October 23.

It doesn’t seem that long ago when carbon was not a topic of everyday conversation. But that’s changed now that carbon literally hangs over our heads like the sword of Damocles, a grim reminder of the dangers of continuing to feast blindly on the affluence of a fossil fuel economy.

The irony is that carbon, the basic building block of life, has been so systematically misused, it has become humanity’s greatest threat. The consequences of carbon’s excess in the atmosphere affect all life. After all, it’s carbon’s nature to be a foundational aspect of nearly all biological forms and processes.

So, is it a surprise to say the imbalance in carbon in the atmosphere can cause political instability?  Not according to former Secretary of State John Kerry who said: “It’s not a coincidence that, immediately prior to the civil war in Syria, the country experienced its worst drought on record.”

And it should also come as no surprise that climate disruption will affect food supply. A study from the Potsdam Institute for Climate Impact Research said that without substantial emission reductions, the US, the world’s largest food exporter, would suffer serious (20-40%) yield losses in wheat, soy and corn by the end of the century.

But many say a reduction in emissions alone will not get the job done even if the world gets serious about transitioning to a non-carbon economy at the rate of the Paris Climate Accord. Does that mean that the situation is insoluble?

“The most intractable problem today,” Margaret Mead said, “is not pollution or technology or war, but the lack of belief that the future is very much in the hands of the individual.”

Two individuals who decided to do something about the existential dilemma of our global climate unraveling from its evolved harmonious state into an unstable and inhospitable state are John Wick and Calla Rose Ostrander. John is the co-founder of the Marin Carbon Project and Calla Rose has spent almost 20 years working to transform large complex systems like the cities of Aspen, CO and San Francisco from climate problems to climate solutions.

As dead serious as both John and Calla Rose are about solving the climate quandary, they are, on a personal level, quite joyful; perhaps because they may have found the elixir of life–carbon.

What they want to do is re-shift the balance of excessive atmospheric carbon and capture it in the soil where, instead of being a disruptive force, it supports healthy life systems by increasing fertility and water retention, and kick-starts the biology of the soil food web resulting in increased yields and healthier more resilient plants while holding carbon deep in the soil in a stable form reducing the atmospheric overload.

Make no mistake, this is not some hobby project on the rural fringes of Marin. Soil carbon, as an answer to climate change, is being adopted into global climate thinking. France has introduced the 4 per 1000 Initiative, which promotes a 4% increase in soil carbon per year and is working to bring players in the public and private sectors to get on board.

The math is extremely encouraging in regards to how re-carbonizing depleted soils globally could play a transformative role in turning the clock back on climate change by drawing carbon from the atmosphere and storing it in the soil through the everyday ubiquitous magic of photosynthesis.

Wow, there is a future and it’s dirty and full of earthworms and mycorrhizae fungi, nematodes and billions of beneficial bacteria—all thanks to carbon.

Calla Rose Ostrander has teamed up with John Wick and the Marin Carbon Project team to do the trials and gather the rigorous science on how pasture lands can be managed to maximize carbon sequestration. They are working with ranchers to develop carbon farming plans and their work has been instrumental in influencing the potentially game changing California Healthy Soils Initiative that will monetarily incentivize carbon farming.

Agriculture and land management have been underestimated if not completely missing from the climate conversation. Food production accounts for about 40 % of the earth’s land use. A deeper understanding of how the carbon cycle works and how that informs climate smart soil management practices may very well be the most realistically hopeful solution in solving our most intractable problem.

John Wick and Calla Rose Ostrander share their momentous work on carbon farming research, practices, policies and how they are building a statewide network of carbon farmers and ranchers in a keynote presentation at the Bioneers conference (Oct. 20-22). And on October 23, in a full day workshop at Stemple Creek Ranch, they will be joined by an array of remarkable farmers, scientists, ecologists and food system activists who will make the connection between carbon and climate justice, local foods systems, organic agriculture, and agroforestry.

Yes, there is a future, its secret is in the soil and, like all life, it is made of carbon.