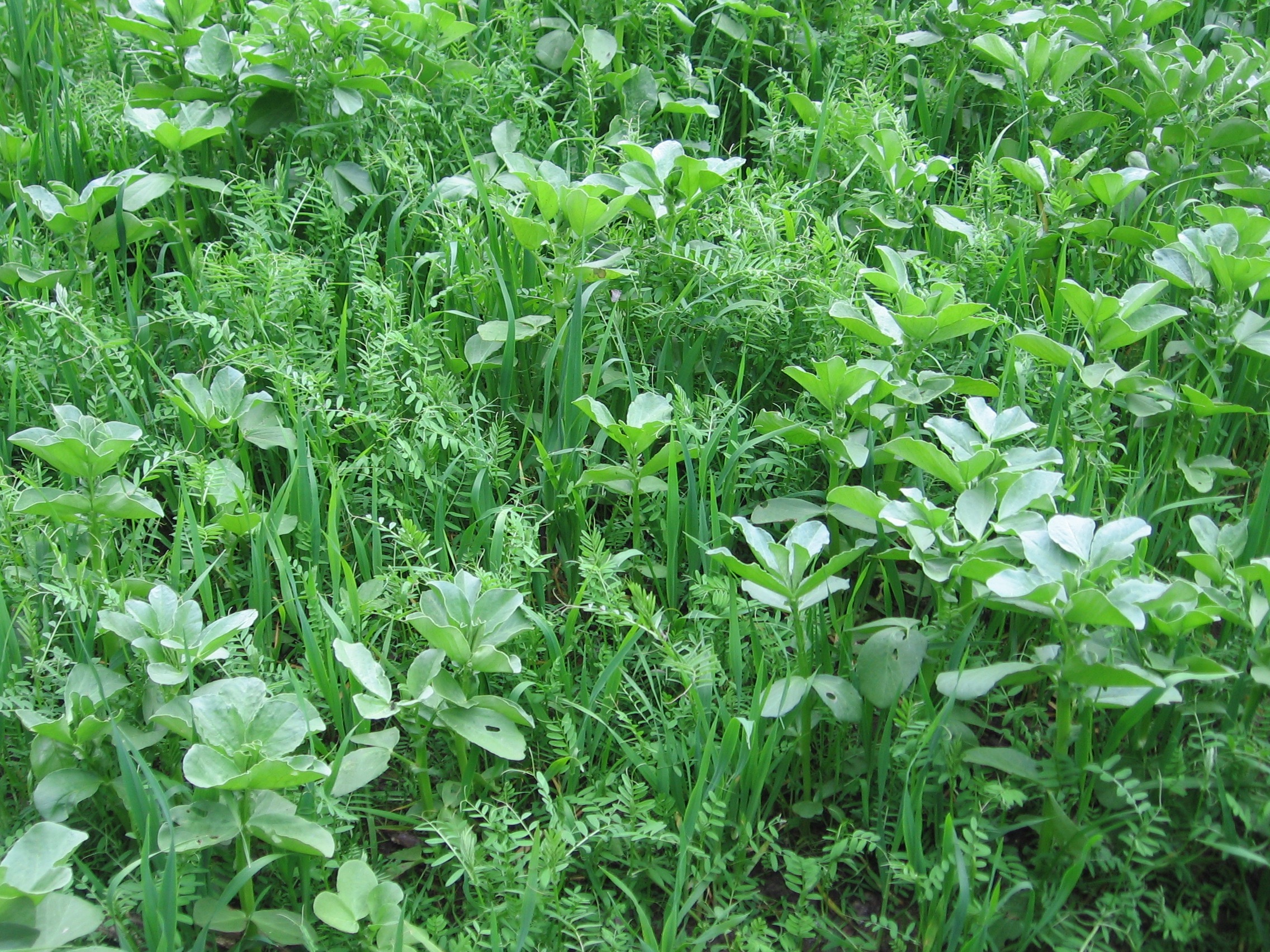 The mark of a good farmer, within conventional farming circles, has long been a “clean field” – bare ground void of any plant cover between the crop rows. Winter fallowed fields also are left exposed without anything growing on them, but that kind of misguided thinking is changing.  The fastest growing trend in agriculture is cover crops. According to the 2017 Agricultural Census, cover crop plantings increased by 50 % over the previous 5 years, but there’s a lot of room for continued growth, only about 4% of all farmers in the USA employ this easily adopted practice that supplies a wealth of benefits.

Cover crops reduce erosion, improve water quality, control weeds, attract beneficial insects, and reduce polluting nitrogen runoff into waterways. Plants such as various legumes, grains and grasses that are grown primarily to increase the health of the soil rather than to harvest for market, can provide an economic incentive by increasing yields and provide ecological services by sequestering carbon and boosting fertility. The more extreme and erratic the weather, the more benefits cover crops provide, and the more their advantages increase in comparison to farmland without cover crops.

Cover crops shift the approach to farming from one that emphasizes chemicals to one that emphasizes biology. Through photosynthesis and plant decomposition, cover crops mimic nature’s method of cycling carbon and other nutrients to nurture the synergies among the complex community of organisms in the soil food web.

Tim LaSalle worked in Africa as an advisor to small farmers and as a research coordinator on soils and food security for the Howard G. Buffett Foundation. Tim also served as the CEO of the Rodale Institute and more recently co-founded the Regenerative Agriculture Initiative at California State University, Chico. At a Bioneers Regenerative Agriculture field day at Singing Frogs Farm, Tim discussed the benefits of cover crops, “By keeping live roots in the ground, keeping the soil well covered, and growing a lot of biomass, you will capture a lot of carbon in the soil, which will improve the biology and improve water infiltration and water retention to fight droughts. As the biology gets healthier, photosynthetic efficiency improves, which leads to retaining more carbon in the soil. At the ecosystem level, there will be more biodiversity aboveground and a much more biodiverse and healthy soil biome—especially if you plant multi-species cover crops.

“These principles can work and work fast. Are they applicable on large commercial farms? Without question. We were doing cover crop work for years; it’s a matter of not leaving bare ground, keeping something growing on it. That’s a big step forward.

“We find we need less chemicals. Eventually people like Gabe Brown and Gail Fuller and farmers around the country learned that they don’t need to write a check for fertilizer anymore. They don’t need insecticides or herbicides as much. Once the chemicals are out of the system, the biology can flourish even better and the system gets more resilient. That’s exciting for all of us. It’s exciting for farmer profit; it’s exciting from the standpoint of seeing increased yields and better water cycles. We’re not polluting our streams, and we’re not putting excess nutrients in the Gulf of Mexico.”

Paicines Ranch is an exemplary operation implementing regenerative agricultural principles and adapting them to the micro-climate of their diverse 7000+ acres of rangeland, row crops and vineyards. Cover cropping is a key part of their system, and they have also integrated animals into their cover crop rotations. When the cover crop has matured, they bring sheep to eat it down instead using a tractor to mow it. The sheep get fed well and leave behind rich nutrients in the form of urine and manure.

Some farmers think that cover cropping is a long-term investment in the soil and feel that they are not able economically to take land out of production for a future payoff even for one growing cycle. Claudio Nuñez of Paicines Ranch explains how Paicines, by adding animals to the system, changes that,“Cover cropping is the single biggest thing that anybody could or should do. Once you integrate the animal into that, you have a salable lamb harvest. The economic value that was to be realized down the road in a couple of years becomes profitable right off the bat. Integrating animals and cover cropping are probably the two most important aspects of our system.”

Cover crops at Paicines Ranch are healing the land and adding to the economic bottom line in quantifiable ways. Initially the nutritional content – known as the “Relative Feed Value” (RVA) – of the cover crop was insufficient to support healthy weight increases in the animals. The animals only gained a pound per day. But by continuing to grow cover crops, which build healthy soil with more nutrients, the RVA went from 80 to 260 in the third year, a dramatic increase in nutrient density, resulting in an average weight gain per head of livestock of 3.5 pounds per day. Claudio said that, “As the landscape became more functional, the critters gained more weight. That’s dollars baby, sunshine dollars.”

“Sunshine dollars” are one of the benefits of the economy of photosynthesis – using the energy of the sun to transform atmospheric carbon into food that nourishes plants, the life in the soil and livestock, while healing the ecosystem and providing a better livelihood for the farmer.

“The cycle” Claudio said, “becomes pretty virtuous in that we’re maximizing and intensifying the different revenue sources, the fertility, the solar energy capture. It’s more efficient all the way around.”

The USDA NRCS 5 principles for heathy soil are: minimize soil disturbance, keep the soil covered, keep a living root in the ground, provide diversity, and integrate livestock. Cover crops can be a strategy to achieve 4 out of 5 of those principles. Keeping those live roots in the ground creates th­­­­e nutrient pathways from the sun to the soil and is therefore the foundation for regenerating farmland soils.